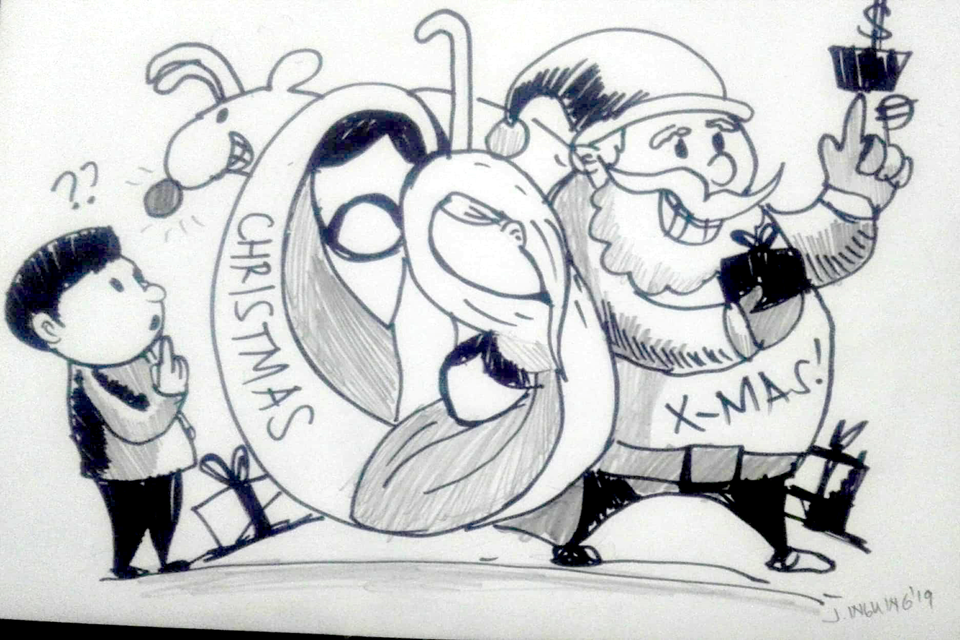 AS LONG AS CHRISTIANS  do not forget that Jesus Christ is the center of the Christmas celebration- the birth of a God -Savior among men, there is nothing essentially wrong with the material revelry and festive feasts at Christmastime.

After all, joy should fill us as we recall we have been redeemed from the throes of Hell by His birth, death and resurrection that begins in a chilly morning on December 25 in the little town of Bethlehem. Should we not celebrate, then?

This idea of Jesus giving His Life for us- greater love no man has- is reinforced by the gift-giving of the Three Kings from the East bearing gifts of gold, myrrh and frankincense to the new-born King.

Thus, merry-making and gift-giving need not be that awfully bad during the Christmas season. It has to be a joyful celebration because it is a joyous event.

It is very laudable, therefore, to see the “Belen Contest in Kasadya sa Pasko”, as part of our local celebration. It smacks of our Christian tradition and reverence to the Child Born on a Midnight Clear- participated in fastidiously by 13 towns and the capital city.

The beloved BCRC Founder Jun Dejaresco was also such an Adoree of the Blessed Belen. A month before Christmas, our sala in the ancestral home along Inting street was almost filled to the brim with his version of the Belen. He spent precious hours of his busy days supervising the construction of the belen.

The most authentic belens that time with huge replicas of the characters, of course, was found in the two residences of the Suarez family in sitio Ubos  just before the Causeway. They were sights to behold and perhaps the majority of Tagbilaranons came and were awed by their majestic splendor and authenticity.

Those belens must have been worth a fortune.

The children spoke in whispered tones that perhaps their father was going through his second childhood- or reliving his younger days of youth.

Then he would simulate a smaller version of the popular moving Xmas décor of the COD Department store in Quezon City with his own mini moving Xmas parade right in front of the house.

Many people who saw the flashing brilliance of the outdoor décor and indoor Christmas tree- would often decide to go and watch “Dejaresco’s Belen.” It pleased the old man no end, we could tell. It was his childlike way of sharing his Christmas joy.

People often wrongly assume that since we spend so much during the Christmas holidays, we are automatically commercializing Christmas. Not necessarily.

It is, after all, the posture of the heart that matters. Keep Christ in the middle and all the festive, happy celebrations will be apropos.

Tradition has made the Christmas season a time for spending and giving.

In fact, credible sources say that most modern department stores in the Philippines make 70% of their income during the last quarter of the year.

It is the time of the year where employees get their Christmas or performance bonuses, the 13th-month pay, the shareholders their cash dividends and the OFWs send their Xmas giveaways to folks back home.

Are you surprised we spend so much money during Christmas time? It is a season to keep warm with family members and relatives in endless reunions. We visit friends, kids go caroling, and the good ones visit the sick and the imprisoned. And the sick among us get visited- for what goes around, comes around.

It is a time of being jolly and deck the halls with boughs of holly. It is the grand time of Jolly Ole St Nicholas, now the Red Dressed Santa Claus first popularized by a Coca Cola commercial in 1920. Since he needed a sleigh to go around the places to distribute gifts, the idea of Rudolf the Red-Nosed Reindeer came into play in 1939. To drag his bags of goodies.

Until Santa became naughty and started “kissing Mommy underneath the mistletoe last night.” Ah, the songs.

When September comes, the pesky radio stations start playing Christmas songs and joyful melodies already- making the Philippines- the longest celebrator-nation of the Christmas Holidays. Four months and then some..

And so we have parties and we are all dressed to the nines -with the supermarkets, stores and now -online entrepreneurs- bringing down prices to ridiculous levels just to corner one’s Christmas money. But oh, what a joy.

To give and receive gifts during the Holidays. But always remember- be a cheerful giver and do not count the cost and die like Old Mr. Scrooge.

Decorate and transform your house in a blazing, crazy combination of colors gold, silver, blue, red, yellow and the in-betweens. Invest in a spunking Christmas tree and hang your stockings by their bough- you might get your Santa’s wishes.

Travel if you may to some relaxing places during that long Holiday and feel how good your God is. He wants you to be happy -every day, in fact- but especially Christmas- it is, after all, His Birthday or have you forgotten?

Broke after Christmas- charge it to experience. Felt like a King for a few days- bless your soul- it was meant to celebrate the King’s birthday. It is always better to give than to receive. Ask your King.

Did you over decorate your Christmas tree that its branches were hanging deeply and low- enough for your pet dog to smell and play with the decors?

Give your dog a break- it is Christmas time.

Feel guilty that you are part of the world that commercializes Christmas? Pay no heed. As long as you keep Christ in your heart as you go through the holiday frenzy and wild spending- let it be, as John Lennon croons.

The Baby Savior is not a Kill-Joy as the cynics want to portray Him to be. There is joy in being Christians- and much more so during Christmas.

Afterall Christmas cannot be spelled that way without Christ in it.

Peace on earth and goodwill to all men. Shalom!