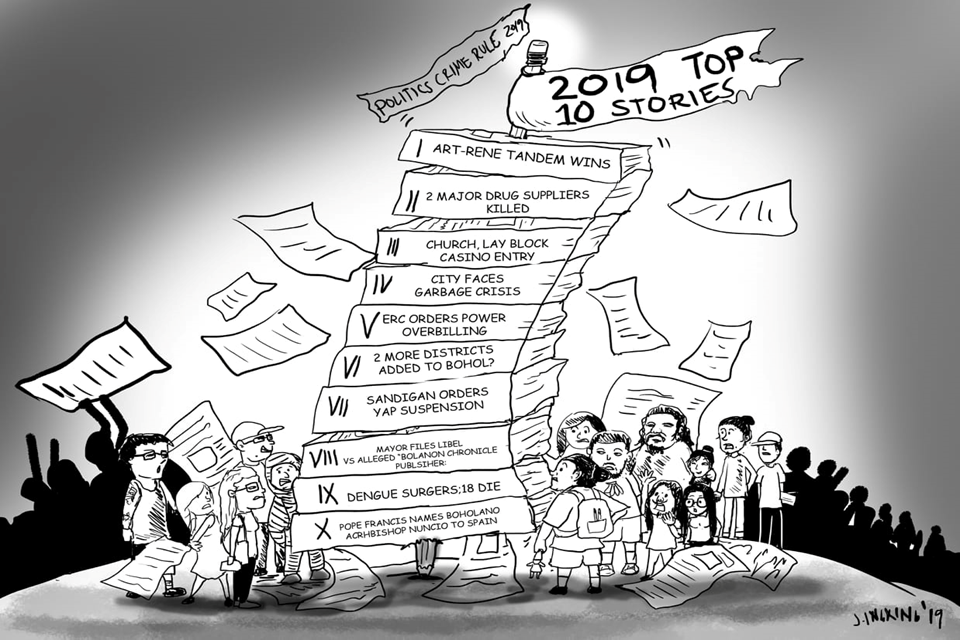 The Mid-Term electoral exercise that brought a new political tandem in Art Yap and Rene Relampagos into provincial political power and the violent deaths that troubled the pathways of two alleged big-time drug dealers and a cockpit owner grabbed the main headlines of the Year 2019.

They promised they would never fight against each other politically- in an unwritten political manifesto – which led to their unification as a winning tandem as Governor and Vice Governor of Bohol, respectively,  involving former third district solon Art Yap and first district solon Rene Relampagos.

Political blood runs in the veins of Relampagos, starting with his father Juan “Aning” Relampagos from Loon and a Lions Club stalwart while Yap is a relative newbie in politics- who came out of the blue- bolstered by his relational affiliation with a Boholano wife, and who earlier won two “no contests” fights as congressman.

In the gubernatorial combat marked by horrific mudslinging and alleged massive vote-buying, Yap of the “Padayon Bol-anon” edged opponent and top-ranked former Cabinet secretary Leoncio Evasco by a whisker of a little over just 2,000 votes in a contest that drew participation among at least 650,000 Boholano voters. Relampagos, meantime, got the better over senior Board Member and HNU Dean of the College of Law Tomas Abapo by over 52,000 vote margin to become Vice Governor.

Relampagos, in the past, also served as provincial Governor with now Rep. Edgar Chatto as his running mate in a tag team of “young ones”.

An ally, former governor Edgar Chatto walloped former Tagbilaran City Mayor Dan Lim by more than double the latter’s votes for the First District post. The last termer Rep. Aris Aumentado, heir apparent of the legendary Rico Aimentado, showed who is boss in the second district for the third consecutive time -in a smashing reelection victory.

For the third time, city mayor Baba Yap once more showed his charisma over the city folks by a landslide third reelection mandate. A motley of new and old-time mayors, on the other hand, also scored poll victories in different fashions.

NO. 2A- 2 MAJOR DRUG SUPPLIERS KILLED

Allegedly supplying a substantial two-thirds of the illegal drugs in Bohol, the two-headed dragon of cousins Esterio Quino and Isagani Canete were killed in a buy-bust operation in Clarin led by the Regional Special Operations Group-after months of surveillance.

Retrieved was a huge cache of shabu valued at P6.8-M, indicating the killed dealers were no small fries looking for pennies. The drugs found their way into Bohol via pump boat from Cebu to Clarin.

“The Quinio-Canete group was planning a hit against the police who fingered their allies in the trade leading to their arrest”, summed a report. While allegedly keeping an arsenal that included the high-powered M-16s, the raid yielded only small-caliber guns.

Their demise was expected to weaken the drug trade in Bohol – or did it really?

Ryan Sigue, 40 had built his fortune by running two cockpits in Dauis and Loon ( an unverified third in Sikatuna allegedly)-but the authorities suspect the investment came from drug money.

His legend stopped along Benigno Aquino Avenue in Booy -when gunmen sprayed his Mitsubishi Expander with 116 bullets from M-16’s and .40 Caliber pistols- a number meant to ensure his certain death.

In 2016, Ryan of the dreaded “Sigue Brothers” allegedly involved in drugs and guns- escaped an NBI raid of his  Oceanview Apartments in Dauis-and so did his brother Renee. It was only brother Fernando who was collared with unlicensed firearms in his Dauis abode.

Some P 1-M in cash was found under the bed of the missing Renee during the NBI raid of his home.

In a strongly-worded manifesto, signed primarily by the two Bohol Bishops Abet Uy and Daniel Patrick Parcon and co-signed by the Provincial Tourism Council and the Association of Hotels, Resorts and Restaurants- the paper urged the moral conscience of both government and the private sectors to say “No” to casinos.

It was a pre-emptive strike aimed at the underbelly of casino entrepreneurs who are -reportedly-already making their blueprints to ride on the financial bonanza that a new international airport will bring upon the province.

It is described as inconsistent with the aim of an eco-cultural type of tourism and the values of a highly religious Boholano community with 18 produced bishops, a number of priests and nuns and a vocal and active Catholic laity.

Casinos, the manifesto averred, produce gambling addicts and addiction leads to many social sins against man and property. “Thailand, one of the leading lights in ASEAN tourism has banned casinos. Mainland China, Japan and Taiwan have no casinos.”

In short, the manifesto -argued that casinos do not make tourism prosper by its lonesome. And can even lead to the moral bankruptcy of addicted practitioners.

There have been talks in the past about the establishment of casinos here- but volcanic resistance to the move by citizens stopped its movement on their tracks – before it can even take off.

In November, 25,000 city households and hundreds of business firms were caught with a crisis of uncollected garbage after the DENR padlocked the steel entrance of the open dumpsite in Dampas.

Leachate, a contaminated liquid waste, has been noted extensively in the dumpsite ” threatening public safety and contaminating the source of groundwater for drinking”, said the furious DENR officials.

Noted was the lack of segregation of waste materials at the barangay levels, which is in violation of the “Ecological Waste Management Act of 2000”. The complaint was brought to the DENR attention through the  Presidential Complaint Center “8888” aired by a concerned resident.

Insinuations of real estate “deal-making” development were spread about the otherwise “environmental issue” but were not confirmatory. The city government responded with new stricter collection policies and DENR offered to help in the technical aspect of solving the problem. Is the problem over?

Hundreds of thousands of Boholano power consumers of the three (Dus) Distribution units- were shocked to see a post-election upsurge in their May 2019 electric bills that sent Governor-elect Art Yap and ist District solon Edgar Chatto complaining to the ERC – the Energy Regulatory Commission.

The two-day marathon discussion in ERC Manila led to an August 1 directive of the ERC to reimburse the overpayment of power consumers due to “erroneous computation touching on the NSS (Net Settlement Surplus).”

The erroneous billing resulted in an additional cost of from P 2-  P3/ kilowatt-hour to the monthly billing. Power is a major production cost of most firms and a basic need of the family in general.

There is a move that apparently has the unanimous backing of Bohol’s three solons, Edgar Chatto, Aris Aumentado and Alexie Tutor. It seems to also have the endorsement of the powerful “Liga ng Mga Barangay”.

The public consultation on this matter will, of course, have to also be broad and swift.

This has something to do with the move to add two more districts to the present three of Bohol to enhance a more focused socio-economic development. The law allows for the creation of a new district based on a contiguous area that houses at least 200,000 inhabitants.

Alburquerque, Corella, Sikatuna, Cortes, Maribojoc, and Tagbilaran City with a population of 268,245.

Barely had he warmed his seat, Governor Art Yap was slapped a 90-day suspension order by the Sandiganbayan for cases involving his duties as former chief of the Department of Agriculture.

Yap is facing  18 counts of graft, one count of falsification and one count of malversation after former Misamis Occidental Rep. Marina Clarete  allegedly allocated P62.63M of her PDAF  from 2007-2009 to bogus NGOs which the former was reportedly dealing with.

The Ombudsman had found probable cause for graft and despite Yap’s motion for certiorari to quash with the Supreme Court, the Sandiganbayan had received no such restraining order from the SC so that suspension order was put in place.

Yap has claimed innocence over these allegations. After 90 days, Yap automatically resumes his post as Governor.

Dauis Mayor and concurrently President of the Bohol Mayor’s League  Marietta Sumaylo filed a P33-M libel case against the alleged “publisher/blogger/developer” of the “Bol-anon Chronicle” Romulo Rowento Bayron a.k.a. Rowenio Bayron for a three-article series maligning her person in the heat of the campaign for the leadership of the Bohol Mayors’ League.

Sumaylo filed an Online Libel case under the “Cybercrime Prevention Act of 2012” in the total amount of P30-M  indemnity and P3-M for “the public good” and deter others from following such a bad example. Charges for legal services of Sumaylo will also be charged to the respondent.

The articles hinted at bribery to win the race for the league’s leadership and implicated her in the drug trade and the murder of Ryan Sigue, alleged drug big-time dealer.

The NBI helped uncover the identity of the writer through intensive forensic investigation and nailed the identity despite the various layers of cover-ups.

The new medical menace called dengue borne by pesky mosquito types once again reared its ugly head when as early as July- 18 persons aleady died from its sting and over 1,500 people hospitalized.

Hospitals and personnel have been fully occupied with even hallways sometimes decked with patients and their attendants.

Through the year, dengue remained a medical situation and no amount of precaution seem to fend the mosquitoes off.

The controversy on the efficacy of the vaccine Dengvaxia also contributed to the many casualties and illnesses nationwide.

Pre-dominantly Catholic Bohol, has another reason to be proud in the appointment by Pope Francis of Boholano Archbishop Bernardito :Barney: Auza as Apostolic Nuncio to Spain.

The appointment of Auza, who speaks fluent Spanish, is apropos especially coming as it does two years short of the 500th anniversary of the Christianization of the Philippines under the efforts of Spain.

He has been serving since 2014 as the Holy See’s Permanent Observer to the United Nations in New York. Born to parents Mr. and Mrs. Meliton Auza of Talibon, Archbishop “Barney” was an ordained priest for the Diocese of Tagbilaran in 1985.

Meanwhile,   Pope Francis named  in March this year, Fr. Cosme Almedilla of San Miguel town as the new bishop of Butuan and Claretian Fr. Leo Dalmao of Tagbilaran City as bishop of Isabela in Basilan.

Almedilla, a clergy of the Diocese of Talibon, succeeds Bishop Juan de Dios Pueblos who died in October 2017.

A native of San Miguel, Bohol, the bishop-elect is a product of the St. John XXII College Seminary in Malaybalay City and the Loyola School of Theology (LST) in the Ateneo De Manila University.

Dalmao, meanwhile, will take over the post from Martin Jumoad, who was appointed archbishop of Ozamiz in October 2016.

The bishop-elect is currently serving as Consultor and the Prefect of Formation at the Istituto Guiridico Claretiano in Rome, Italy.

At 49, he will be the first Filipino Claretian to become bishop.