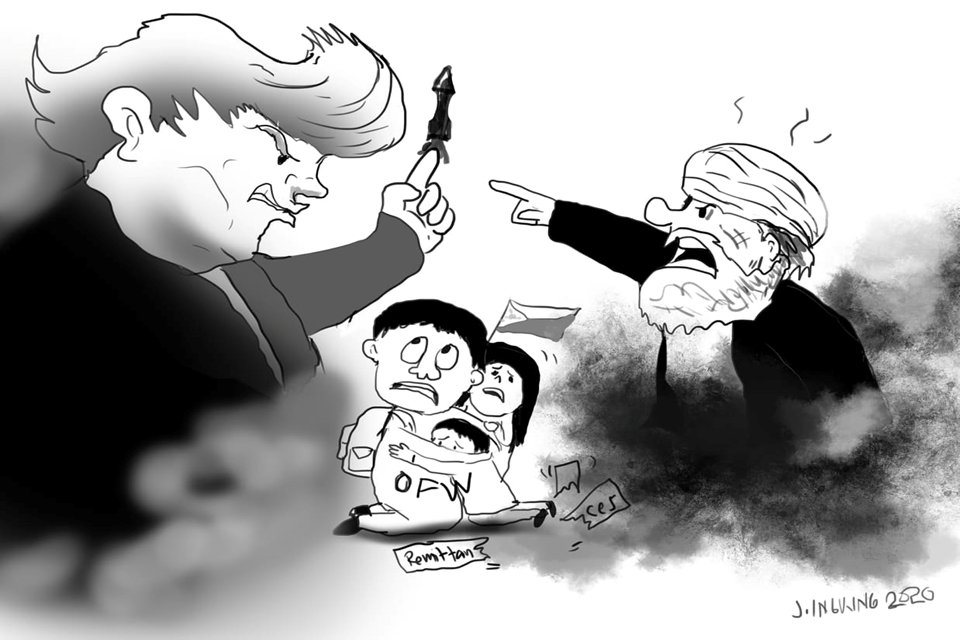 ALTHOUGH IRAN AND THE USA had issued dovish statements that will de-escalate the tension in the Middle East, the Philippines is not taking any chances.

Under former AFP chief of staff former-General Roy Cimatu (current DENR chief), RP will execute the mandatory repatriation of Filipinos over the raging cauldron of the Middle East- using an appropriated P1.8 Billion within the 2020 National Budget.

(There are a considerable number of well-placed Boholanos working in that region).

Philippine Airlines and Cebu Pacific offered free airline rides back to the Philippines and Air Asia –  will bring for free repatriated Filipinos to their respective provinces. Two thousand soldiers will assist in the evacuation.

If the Middle East conflict explodes into a major war- it can hurt the Philippines in many ways. One, there are 2.1 million Filipinos there with the majority in Saudi Arabia (865,000) and the United Arab Emirates (618,000) which are allies of the USA-  vulnerable targets, therefore, of a possible Iran retaliation.

It will affect US$6.6 Billion in OFW remittances coming from the Middle East and the scaling-up of prices of international crude oil which will devastate many industries and families here, as a consequence of high oil prices.

The dynamite fuse was lighted following the January 3, 2020 assassination of General  Qasem Soleimani, the No 2 most powerful man in Iran (after Supreme Leader  Al Khameini (since 1989)- fatally hit by US drones. He was head of the Islamic Revolutionary Guards and in charge of extraterritorial mayhem and clandestine operations of Iran.

But Iran had it coming. In a reported pre-attack briefing, President Trump was allegedly advised that “the threat that Iran was  about to do is worse than the threat of its possible response to our drone attack.” So the political assassination via long-distance but precise firing was approved.

Washington was already fairly agitated up that point.

The danger to Filipinos is that while Iran will talk like a dove it can still act as a hawk. There is no complementation between its word and deed. Iran also has proxy warriors in the nations of Yemen, Syria, Iraq, Afghanistan and Lebanon-making those nations worrisome to live in. Even the so-called US ally-nations are just as bad to inhabit as they can be targets of revenge attacks.

No country right now is safe in the Middle East. And Iran is a dangerous nation to anger.

They fired missiles to US bases in Iraq after the murder but caused little damage. Earlier, their allied protestors partly damaged the US embassy in Tehran angered by the air attacks of the USA on their military weapon depots .

Iran missiles are also believed responsible for shooting down a commercial plane from Ukraine to Kiev this January- killing all 179 passengers in the flight now known as 752.

Iran is also responsible for drone attacks in September- destroying half of the oil facilities of Saudi Arabia, the world’s largest gas supplier. Iranian firepower also destroyed three commercial tankers passing through the Strait of Hormuz last year-where one-third of world commerce flows through. Among the destroyed ships were Norwegian and Japanese-owned.

Iran has capabilities of clandestine attacks on embassies, government and private properties and people- anywhere in the world- including those in the USA. Much more, in the Middle East where it wields vast influence despite Iran’s being just a second rate military and third rate economic power.

Iran knows that despite its standing army of about 800,000, the largest in the region, its military weaponry is puny compared to that of America -so that Iran would likely do guerilla types of attacks including cybercrime on facilities and again deadly drone attacks.

We must recall that the enmity between the two nations dates back to the  2015 sanctions imposed by America over the lack of transparency of Iran’s nuclear weapon development. Trade embargo, freezing of overseas assets and the vise-like grip on Iran’s energy and shipbuilding industries have been imposed over the protestations of Baghdad.

Iran had warned that if its oil tankers are halted from using the Strait of Hormuz, then no other ship will also be able to pass the same gulf without being blown to bits by Iran missiles, drones and mines.

Can one imagine the effect on the prices of oil by then? It can trigger a world hyper-inflation leading to a global recession which is worse.

Although ranked only No 14 in the world in terms of its power from the armed forces, Iran is proud to have trained well its 800,000 soldiers and benefits immensely from the violent legacy left behind by the slain general in both overt and covert military operations anywhere in the world.

There appears little hope for an easy resolution of the nuclear imbroglio- in much the same way that North Korea is struggling with multi-nation commercial sanctions but still refuses to give up its nuclear program- which it feels is the only assurance that they will survive as a  nation.

Let us not forget that Iran shares a long geographical border touching on the USA’s chief “Cold War rival in Russia” and has the sympathies of China, currently in a trade war with the USA. The threat , therefore, multiplies in that regard.

To us, the Middle East has always been a powder keg of violence waiting for its time to be lighted to epic blow-up proportions.

Maybe, for now,  Filipino repatriation seems like a conservative and best response for the nation while we wait for some nation-hawks to evolve into hybrid -doves and learn to live in quiet disagreement over issues in the richest oil-producing region in the world.

Our only hope is the eventual realization of all nations that we cannot do without a thriving oil-region like the Middle East until such time that the world shifts to alternative sources of energy.

Until then, “Peace, Man” as the hippies in Woodstock used to say. “Chill”, as the millennials chorus. “Cool” as the baby boomers chime. Shalom!