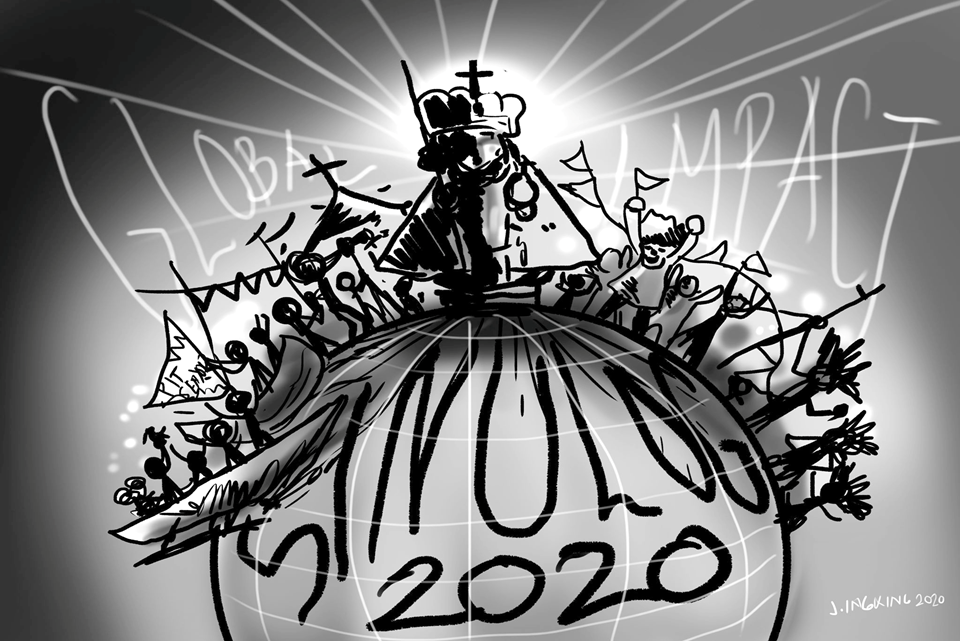 NO PROOF IS AS SELF-EVIDENT that the “Sinulog” celebrated in Cebu City every third Sunday of January has universal appeal than the jampacked Ferry boats from nearby Bohol and Negros and early bookings of foreigners (as early as March) to be in the Mardi Gras center today.

It may sound like proprietary for Cebuanos to call “Sinulog” as their own as even those Cebuanos based in Manila look forward to coming home for this festival with even greater fervor than for the Christmas and New Year holidays. But it is.

They save for months to be home by January.

Not even the Manila-like vise grip of traffic in Cebu has diluted the enthusiasm of about 2 million devotees today to hear Mass at the historic Basilica and join the 10-hour street dancing route from the church to the cavernous Cebu Sports Complex.

Another attraction is the colorful fluvial parade along the Cebu seas still magnified by the electric colors of the boats and buntings. As early as 5 in the morning today, people shall have taken their energy drinks, coffee, Pharmaton and MX 3 to beef up their adrenaline for the day’s long grind.

They will grind and bump in the two-step dancing gyration to the beat of drums and the shouts of “Pit Senyor” and “Pit Senyor.  They will all be “dancerous” (as in dance) as a witty description of Boholano Court of Appeals Executive Judge Gabby Ingles might want to call them

Even if not all of them even understand the true derivative of the phrase which is actually lifted from the “Sampit sa Senyor” (Supplication to the Senyor Sto Nino or the Child Jesus).

Or that “Sinulog” was roughly abridged from the “sulog” – a loose translation of the rushing sound of the river waters.

So- today is to honor the oldest Catholic relic- the Santo Nino- whose origins are replete with legend and part history.

The state of security is on maximum high alert for authorities who are expected to go beyond the usual maximum tolerance so as not to dampen the exuberance of the spirit in observing which is at the core- a religious activity.

For security reasons, however, the cellular signals of Smart and Globe phones were shut down as early as yesterday afternoon.

But to be shut off from the world and its worldly concerns and even their loved ones (for a few hours) are a small price to pay for the devotees who have been deeply engrossed in a “collective effervescence” that only one who is within the teeming thousands can accurately depict and feel.

The “Sinulog” crowd feels “the power of union” and a “shared ecstasy of common religious experience”. It is getting high without the shabu.

In fact, results from the popular “Radyo Merkado”feel-the-pulse survey of sister station dyRD, “religiosity”-marked by answered prayers and unexpected blessings from Above, topped the reasons why millions flock to the Queen City of the South today.

They all point to the intercession of the Sto, Nino, a child Jesus wrapped in Spanish royalty clothes and with an innocence that may seem a little lost in the image of the adult carpenter-like-body of Jesus, the Messiah, Christ.  For indeed, no one is immune to the unintended seduction of a child’s innocence, mirth and even with slight mischief.

The participation is described as a “plain and simple” devotion to the Child Jesus- to drop all else and attend the Mass at the Basilica and be one in the happy street celebration. Take one, Ondo Montecino, a Sugud Cebu native based now in New York for 30 years- his commitment is as solid as his marriage vows, to be in Cebu every January- come hell or high water- until his last dying years.

The way we look at it – the “Sinulog” festivity is not just a ritual- it is a ritual with a strong belief. We have combined the Japanese traditional penchant for rituals ( from practices of Shintoism and Buddhism) and the deepening faith brought on our shores by the Spaniards about 500 years ago. It is, to us, perfect alchemy.

It is, therefore, apt that the epicenter of explosion (not of the Taal Volcano vintage) has to be the island province of Cebu- for after all- this is where Magellan and his group of friars first dug deep into the sand -the wooden Holy Cross and brought Christianity to the natives.

Legend has it that in 1521 -Magellan first gifted Rajah Humabon and his wife with the image of Sto. Nino- after which they were baptized along with their tribes and given Christian names.

Another legend has it that years later on April 19, 1565, the second Spanish expedition led by Admiral Miguel Lopez de Legaspi found the same relic under the rubble of a burned sitio, and accordingly,  they set up a permanent sanctuary of the relic in the place where now stands the Basilica.

True or not- the urban legend remains an accepted truth and contributes to the fascination of the Tale of the Sto. Nino.

That the religious fervor permeates the Cebu festivity has not been lost when compared to the celebratory secularism of the Bacolod Maskara and Iloilo’s Dinagyang.  And even our own “Sandugo” which is focused on the Blood Compact.

While it is true that the raucous celebration of the Holy Child emanated first from the Ati-Atihan in Aklan and there is yet another version of it in July somewhere in Bicol- none matches the intensity of the Cebu version.

The latter is akin to an Mt. Pinatubo explosion to their Taal and Mayon explosions, to stress the narrative point using contemporary history examples.

The only other similar Philippine event reeking with deep-rooted even fanatical religiosity that comes close as we can recall- is the Manila-based procession of the Black Nazarene- where numerous stories of blessings and healing also abound.

Natural permutations have evolved around “Sinulog” where it has generated family and clan reunions as natural consequences. It has also been a staple tourist event for Cebu – almost going without saying for years now- when it was first started by the late Cebu City mayor Florentino Solon.

Truly, no matter how the detractors try to denigrate the festival, a religious event will transpire in Cebu City today.

Sore feet, aching backs and a dehydrated body may be felt by the devotees – but the richness by which their souls shall evolve from the “shared religious experience”  will be worth the physical loss.

Today – the spirit is willing and the flesh as well. Blessed be God forever.