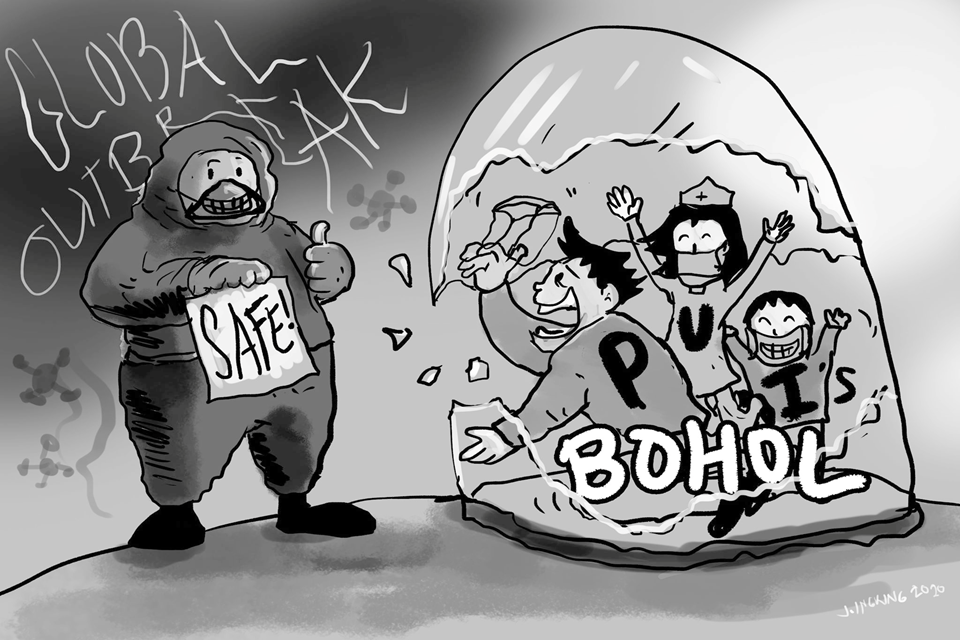 BOHOL MAY HAVE TACTICALLY ERRED on the side of safety- but to us, honesty is still the best policy.

This pertains to Bohol’s quick and forthright announcement of figures related to the number of PUIs ( People Under Investigation) to the public that may have scared the bejesus of tourists not to visit Bohol.

Bohol is technically safe (as of Friday)  from Coronavirus if we talk about getting contaminated through persons infected with the virus. (By the way, we subscribe to the suggestion that they are renamed PUO – or People Under Observation -because the word “Investigation” conjures images of criminals or those violative of laws) . Anyhow,

“Technically safe” we are because all the 9 PUI (Patients Under Investigation) are now declared safe after all tests showed they were not contaminated with the dreaded virus. From Day One, Bohol had faithfully- if scrupulously followed the letter of the directive regarding containing and managing the crisis… But, as they say, some damage has been done- as a consequence..

Bohol tourism – once touted as one of the nation’s most preferred destinations, crumbled down by a crippling 60%- the remaining visitors witnessing semi-deserted resorts and restaurants. Even the day-tour enthusiasts that count the tarsier, the Loboc River and the iconic chocolate Hills as a regular route- collapsed the same way.

Oftentimes,  this is because- numbers scare people. And this happened when the Coronavirus crisis erupted far and wide.  But if we localized, we standby the vigilance and the public honesty of The Working Group (TWG) under Dr. Yul Lopez who called a spade (a spade) when it could have vacillated in calling a Jack a Queen.

Honesty is still the best public policy. It gives Government the insignia of credibility and becomes the only harbinger of the real truth amidst the growing army of trolls and fake news agitators. We will take some losses- but in the end, there is no substitute for an honest to goodness government who renders the real score no matter the bruises that follow. Public service is a public trust, remember?

Without public trust- the government is just a group of people masquerading as policymakers..

The instructions from the Department of Health and the National Government were in harmony. There was no need to add a discordant note to the forthright combination at the local level. And there was none added.

In retrospect, Bohol was declared “free” Friday- but since the worldwide virus continues to grow and has claimed deaths outside of China (Including America and Japan)- it behooves TWG to remain vigilant.

The COVID-19 saga has not ended- it rolls on with continuing chapters-only the Unknown Author certain as to where the denouement will find its ultimate conclusion.

Let us not play God and say it is over just because Friday was a  “Good News” Day.

Places like Cebu and Boracay where there are five times more Chinese visitors than here in Bohol did not seem to get the same limelight as to the number of PUIs or persons suspected with Coronavirus. But let us not forget comebacking Governor Gwen Garcia – early on-was pummelled from pillar to post for suggesting that all Chinese visitors will be automatically quarantined for 14 days at the outset of COVID-19.

At the end of the day, we come to realize that perhaps Bohol was just a trifle more diligent and honest to report the situation. But that is still good- because a half-truth is always a half-lie.

It may be true that Cebu and Boracay were perhaps not as punch-drunk in counting their PUIs relative to Bohol. But that is their call. But the sad fact is the whole tourism industry has gotten a black-eye. It necessitated proddings from the Tourism Secretary Bernadette Puyat-Romulo to let the president Rodrigo Duterte come out in public to coax people to come and visit the Philippines and Filipinos to do domestic travel and tours.

But honesty is its own reward. From hereon, whenever TWG makes an announcement- no grains of salt are needed to swallow their announcements. In contrast, a tale has been told often enough of the Boy who always cried wolf (dishonestly) that when the real wolf came- no neighbor came to rescue the habitually lying kid. Such is the price of lack of forthrightness. We salute TWG.

Because this is the kind of world we live in today. There is so much access to information and everyone who can construct a logical sentence has his own opinion of everything under the sun. Thus, even if figures do not lie- there are as many interpretations as there are people (including exaggeration).

Let us cite a parallel example related to the management of the drug problem in Bohol,.. ,.Bohol recorded many drug apprehensions (vis-à-vis killings) and because again of those numbers, Bohol was listed as number 5 in the country and no. 1 in the region as far as drugs were concerned…  This is another classic example of what numbers can do when differently perceived by the outside world.

But then, if Bohol could make a comparative matrix among provinces about the number of deaths related to the anti-drug campaign, it could belie the whole myth about the drug-notoriety of this province of Datu Sikatuna.

So back to honest pronouncements. Because the TWG was brutally frank and fast with its figures at the very outset of this crisis- do you think the public will believe it when TWG finally says- Bohol is free from COVID-19 and Tourism now open for business?

Of course, it will, Honesty is its own reward. Credibility is priceless.