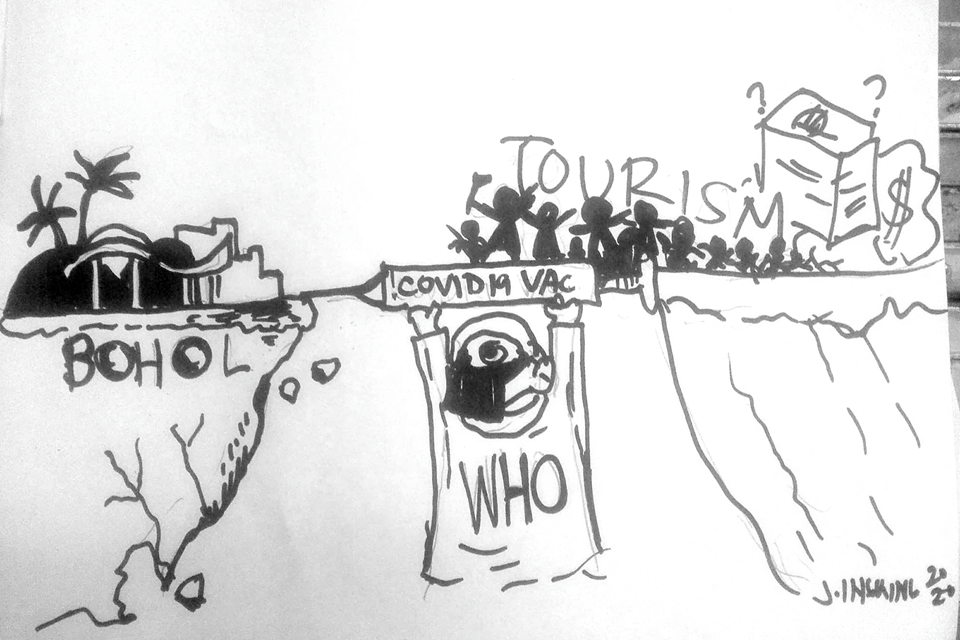 IT IS NATURAL FOR many Boholanos to relax a bit knowing Bohol has no more PUI (People Under Investigation) amidst the COVID-19 scare. But few people realize the crisis is far from over till the Fat Lady sings.

For instance, the WHO (World Health Organization) states we are 19 months away from commercializing an anti-COVID-19 vaccine out there or only in September 2021. Before that date, will Bohol continue to be shell-shocked because it is primarily tourism-bound whose success rests on people’s confidence in travel and health safety?

The immediate impact was a cruel 60% slice off the tourist arrivals. But let us look at the real day to day “face” of the common man addressing the crisis.

A habal-habal man operating along the Alona Beach area in Panglao who used to gross P 1,500 a day is now down to P 600 or P450 a day net of gasoline expenses. That is less than half of his normal daily take. Multiply that misery to include similarly placed others.

Even on Love Day – Valentine’s Day – where lovers normally ease on their spending for their loved ones- there were only two waiters serving instead of the usual six. Management said the rest were deployed on staggered hours basis due to lack of guests. Multiply that misery all over Bohol’s Rest and Recreation establishments.

This is just the start of the crisis. How long will it take before Divine Providence intervenes and short circuits the horrendous medical disaster inflicted upon China of over a billion people and the world-wide reports of contamination?

One hopeful scientist said the virus like the SARS one cannot stand high temperature and concludes COVID-19 will starting saying “ouch” when hot April comes around. Wishful thinking?

The other disaster we can recall of similar magnitude was the Yolanda typhoon where for almost two months Bohol went into a power blackout. Businesses thought they had the antidote by buying generators until it dawned upon them, that precluding the buying of expensive gasoline to keep the generators humming- was itself a financial suicide.

Businesses would have conked out with 45 days straight of power outage till then-governor Edgar Chatto made representations with the NGCP  (National Grid Corporation of the Philippines) to intercede. Of course, that time, unlike now, things were within our reach to control and mitigate. What about a new-fangled virus that no one knows about?

In the Yolanda episode, employees were not retrenched but hired on alternate dates just so they can take home some money during paydays. Is this also feasible now?

We heard Gov. Art Yap had appealed to resort owners and restaurants to give a 50% discount given the market dislocations. We do not have to earn our MBAs (Masters in Business Administration) to know that when faced with a demand crisis, a supply reaction like lowering rates of rooms, food and services may address the slowdown of 30% occupancy a bit.

We know many of our tourism stakeholders will find this difficult to accept – a 50% discount- used as they are to sky high-profit margins considering that Bohol, let’s face it, has been classified as a very expensive place to visit.

The Bohol economy is also spruced up by families where one or two members are busy earning foreign exchange abroad as OFWs. Just ask the bankers where their deposits come from and who are buying houses and lots and cars these days.

The OFW beneficiaries are all over our 47 towns- waiting for these discounts to be announced and effected. What are we waiting for? These practical measures may yet save the ship from completely sinking.

After this provincial launch campaign, tourism can shift its marketing gear and enthuse other  Filipinos in  other provinces in the country to “come to visit exotic Bohol at God-given prices.”

Because, on the other hand, we are almost certain that this COVID-19 episode will not be anywhere near the Black Plague that erased 60% of the population of Europe. We are confident that medical technology and modern science will wrestle COVID-19 soon enough because the whole world cannot afford to see a prolonged viral attack without endangering our world survival- financially and as a human race.

But in the meantime, there are mouths to feed and jobs to save. Let us all come down from our high ivory towers of theories and apply practical down to earth solutions to be our enlightened interim answers to this newfangled crisis.

THE COST OF CORRUPTION

CHINA WITH OVER A BILLION INHABITANTS-   Is estimated by the  IMF (International Monetary Fund) to already have suffered a $185B loss in GDP in so short a period of time.

But what about corruption perpetrated by people in high places in government” and the collaborating private sector in terms of bribery that had cost the world GDP 2% of its value or about US $ 2-Trillion, according to the IMF (International Monetary Fund? It is a plague in itself that is like no other. Worse, it has become a way of life.

Isn’t this also a tragedy in itself?

This often comes from unscrupulous people utilizing public office as their livelihood for private gain. It has become an untenable situation of a de facto “privatization of public policy”.

The ” Anti Graft and Corrupt Practices Act” already criminalizes passive and active bribery, extortion, influence peddling and conflicts of interest. But for years, the Philipines has soundly suffered an inferior infrastructure backbone because of this  (graft)  compared to even among small ASEAN nations. Inflating costs in public procurement are common.

We know that corruption “undermines both the quality and the quantity of public spending.”. This is abetted, doubtless, by a weakened justice system resulting in unfair dispute resolutions-many, many crooks go scot-free as they do now.

This plague has attacked the innards of all past administrations. And despite the antipathy of President Rodrigo Duterter against grafters, surveys showed that there still persists the same kind of corruption in this administration. At one point, the president almost threw up his hands in surrender.

Aside from that, Dan Steinbeck of the World Financial Review points to two other debilitating realities that bedevil the fiscal and monetary strides the Philippines may have taken: tax evasion of US$7.4 B (estimates) a year and US$10-B a year from illicit fund flows or what we may call “white-collar crimes”.

This includes trade mispricing, informal transactions, smuggling, and illegal cash bulk transfers. Steinbeck says in ten years the Philipines engaged in US$90-B of such illicit cash transactions; at par with Vietnam (so-called) but that is small comfort.

Another business literature reads:” Corruption also raises the cost of accessing financial loans abroad since lenders factor in corruption” where revenues are dissipated in ‘rent-seeking rather than productive activities.”

Like the virus that carries the germs that inflict illnesses like COVID-9 which must be exterminated from the face of the earth, the same goes to the human termites that eat the foundations of progressive and democratic economies through their corrupt ways.

A simultaneous purging is a call of the times.