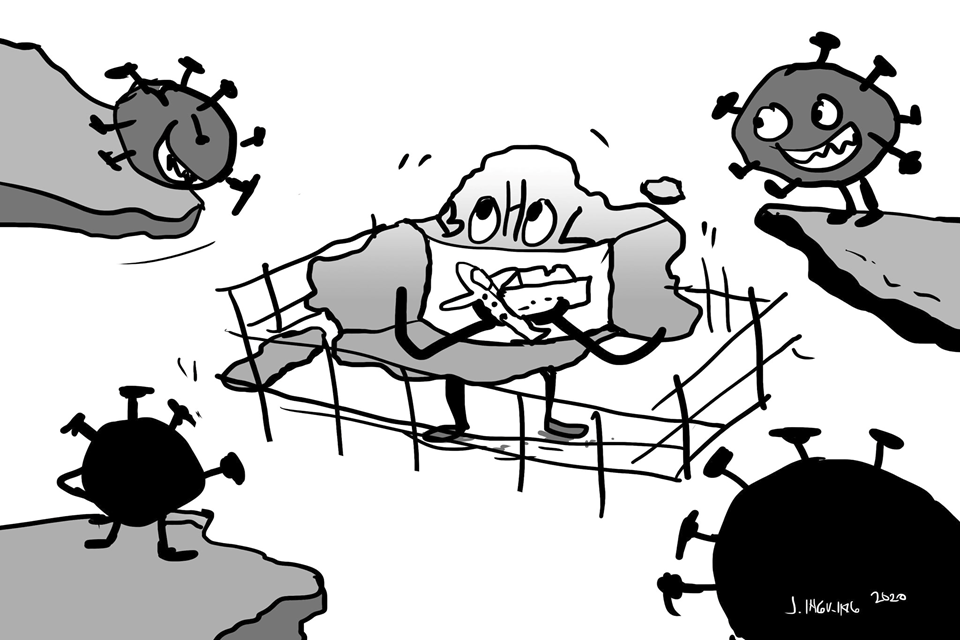 IN SOME SENSE, BOHOL IS STILL LUCKY. It is an isolated island (unlike land-locked Metro Manila)  with a population of only 1.3 million (vs. M.M.’s at least 15 million).

In some poor areas in Manila, the shanties are shoulder to shoulder to each other – becoming ashes to ashes and dust to dust during fires while Bohol outside of the city has a population spread thinly over 46 towns. The populous concentration is not here in Bohol – which is one of the main reasons  Northern Italy has such a huge number of cases.

One more thing, there is no single casualty yet here while the Philippines already has 8 (as of 8 pm last night) and 95 confirmed Covid-19 cases.

Still, this is one time the Boholano community must stand as one- setting aside any and all differences- to protect the province from what has already been classified by the WHO (World Health Organisation) as “pandemic”. Pro-active leadership combined by wide consultation among all sectors in Bohol is one formula to fight Mr.Covid-19. More heads are better than one, as they say.

Tomorrow and the next four days, Bohol will ban the entry of “outsiders” from Bohol via both sea and air. Pump boats are a tricky lot since they can land virtually on any shore making the call for our Philippine Coast Guards to sharpen their binoculars against these illegal entrants.

As in basketball wars, sometimes, defense is the best offense. We see the practicality of such a stance. Truth to tell, Governor Art Yap has admitted Bohol cannot afford a widespread disease as the “isolation rooms” in the hospitals here can only accommodate 27 patients. That can be a very small number once the explosion becomes exponential.

Of course, the plan to convert part of the  Capitol Annex building and the old city airport to contain 5o potential patient beds each is a good forward plan. To include the suggestion of the 1Bohol COVID-19 Task Force to convert one of the ten devolved hospitals in the towns for the same purpose. Would that be enough in a “worst-case” scenario? Only God knows.

The other problem is the absence of the so-called testing kits (and reagents) which still have to come all the way from Manila. The Cebu DOH has reportedly gotten some equipment and the manpower -that’s not good enough. Although mandated to be rendered free of charge the testing kits do not come cheap- P8,000 (imported ones) for a 6 hour testing period.

God bless the UP (University of the Philippines) scientists who lately discovered a way to produce them at a cost of P1,400 but they still have to scale up mass production from week to week to reach the country’s optimal need. They also still need the imprimatur of the WHO although such has been approved for use by the Philippine FDA ( Food and Drug Authority).

We have spooked many of our Viber group mates when we pose this rhetorical question: Is it possible that the reason we only have few reported cases in the Philippines (compared to other nations) is that there are not enough testing kits for 107 million Filipinos? How many “walking dead” do we, therefore, really have today bound to go ten feet under the ground or cremation? Spooky, in the least.

On the other hand, because of the potential lack of hospital beds- the “Home Care” self-quarantine method has been endorsed to every home in the province. This means identifying one nook or room in the house where a member will be situated exclusively once showing manifestationS of high fever and excessive coughing and colds.

In fact, says the United Kingdom’s chief science adviser: Isolating oneself when faced with symptoms will have the “greatest impact” in the fight versus the coronavirus. Not going to hospitals. Because many hospitals can become truly overloaded- medics are often pushed to a very cruel state of having to choose who are to live or die among the teeming patients- depending on the gravity of their condition.

Because “Home Care” is the “ideal place” to contain the virus, the CHRONICLE is publishing somewhere in this issue a full-page Instructional on the hows and whys of “Home Quarantine” as part of our public service contribution. It is educational for household members to know the basics of caring for the sick that requires due diligence, patience and discipline to effectively counteract the virulent virus.

Bohol is also proud of its united medical front. In some places, there are reports that doctors and nurses, fed up with the immensity of the demand for services and the lack of testing kits have reportedly closed their shops already. They, too, are stressed, like all human beings.

As individuals, we have also to do our part. Much publicity has already been done on the frequent washing of hands and avoiding touching the face. Likewise “social distancing” and the cancellation of non-essential mass gatherings.

Of course, even in ordinary times, we are all expected to be hygienic and practice clean, healthy living in terms of food and rest. More so, today. Especially those above 60 years old- according to “Oplan Corona”-emphasizing categorically those with existing medical preconditions to be extra cautious as they appear to be the most vulnerable for obvious reasons.

Not just our bodies but our surroundings, too. One local discovery has been to use 1/4 cup of Zonrox to a gallon of water- and use the combination to clean frequently- touched furniture and home or office objects.

Too- not just our bodies but our economy is also bleeding profusely since Bohol is a tourism-driven economy, by and large. And this 5-day closure will add to the millions in financial hemorrhage- affecting both affluent and the average citizen altogether.

The resort, hotel,s restaurant owners and tour operators will certainly be whiplashed severely but remember so will the lowly drivers, waiters, room boys, tour guides, entertainers, habal habal pushers and even small business suppliers to these big establishments can be also side-swept by this economic tsunami.

Aside from the revenue loss, there are the so-called overhead or fixed financial obligations that one has to pay whether there is business, little or none. They can include bank loans and interest, insurance, rental, property taxes and salary of administration and security, among many others. How many will survive this wayward attack of Nature when no one knows when this is going to end?

A giant trial is indeed facing us today and the next weeks-months on end.  But united, Boholanos will stand together- divided, we all will fall.

In the middle of a United Bohol, let there God be standing in All His Might.