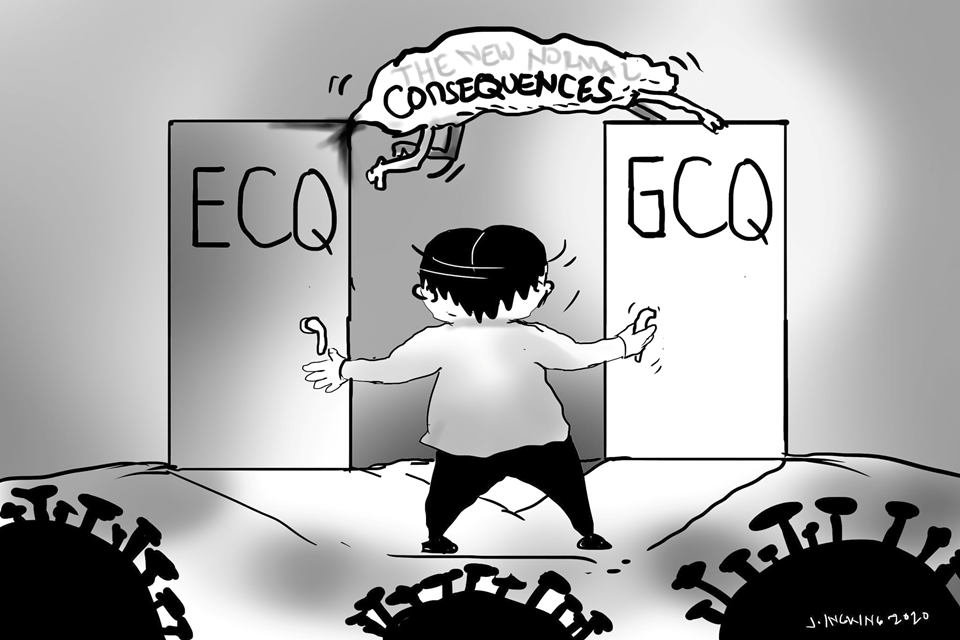 THE EVIDENCE IS THERE for all to see. President Donald Trump has aged from the time he stepped into the White House up to today.

And our eyes may not be perfect, but it seems to us every Philippine president except Erap (too short a reign)- from Marcos, Cory, FVR, GMA and Noynoy bowed out of the presidency- looking much older than when they were sworn into office.

That’s the effect of the collective punishment the rigors of public policymaking is- on the physical, mental and psychological makeup of leaders barring none. It is a daily balancing act of deciding on policies that will never ever please everyone because only Heaven is a Nirvana.

The same is true -to a lesser frightening degree- for provincial down to the barangay leadership. But the nature of the stress is the same. In this pressure-laden age of pandemic, the dilemma faced in making policies is very evident.

Fifty long days after March 16, when Bohol first kept itself under lock and key- the ECH (Enhanced) has been transformed into a GCQ (General). starting tomorrow. The “accomplishment” is a victory for all- policymakers and implementors, (especially) the frontliners and the Boholano community (of this 1oth largest island) who embraced the value of the word  “obedience” to the law.

But what are the current dilemmas?

Due to this reclassification, senior citizens have three free days ( Tuesday, Wednesday and Thursday)- but wait a minute-  they must not only have their senior citizen ID but also the quarantine ID which is given one for every household.  Meaning a couple (both seniors) can never move out together. What if a senior is incapacitated to move alone without assistance?

Are they doomed to permanently be (under the new order) under “house arrest”?

There is an ill-tempered post going around by disgruntled seniors – stating that majority of Cabinet members, many in government positions, many senior officers of private firms and a great number of owners of small businesses are members of the Senior Citizen Brigade. How, therefore, in (Covid’s name) can a nation resurrect its economic flag in the absence of these able generals mothballed at home?

There is a respected study in the United States that shows that the most productive years of men are between ages 60-70- where barring failing health- men will exhibit their best form borne out of skills generated by experience with wisdom and savvy developed over their many years in the battleground.

Yet another medical study shows these seniors are among the more vulnerable to the ravages of the (veerus-) as president Rody sometimes calls it.

How does one make the call?

For the youngsters (below 18), they can leave the house only with the accompaniment of an adult-guardian (what if only seniors are with him in the house?) and, therefore, cannot go out on that coded day?

We know these “relaxed” state of making exceptions is a difficult balancing act between towing the community back to normalcy with a bit of leniency on individual freedoms and preventing the scourge to propagate by keeping the most “vulnerable” stay at home.

Then there is brinkmanship trait needed to attend to the warring factions between two schools of thoughts: that returning OFWs  (after all their heroic sacrifices) have a right to return home (like a pigeon to its nest) and those who think, the quarantine and Covid tests done by the OWWA (Overseas Workers Welfare) and DOH (Department of Health) are not enough guarantees that the returning OFWs will not be harbingers of disaster and carriers of germs.

One can imagine the giant howl of indignation and deafening “I told you so” chorus once one of those returning OFWS becomes a Covid patient here?

Many understand that just one carrier can cause exponential growth of potential victims that can collapse our fragile provincial health care system. It is a no-kidding grim possibility.

Next comes the effort to resuscitate the comatose economy by allowing the re-opening of even the non-essential industries in the province. That looks good on paper. Because with the one quarantine pass a family, that appears like weakening the demand for such reopened businesses simply for the lack of warm bodies- kept at home by the single-pass per family rule.

Are we or are we not revving up the economy, Watson?

The issue of the fiesta celebrations is more clear-cut- by its nature, fiestas are the anti-thesis of social distancing. People hug and high-five one another in festive celebration (food and booze go together) and normally jampack the church and procession in honor of the beloved patron saint.

City Mayor Baba Yap delivered an unequivocal message by simply ordering the city gates and malls closed for May 1, the fiesta of St Joseph the Carpenter and Labor Day.

That’s the example the lead capital would like the 47 towns and 1,000 barangays to emulate for the whole month of May. Masses and novenas can still be held digitally during their respective fiestas and the patron saint float can still go around the streets as the folks cheer and pray by their home windows and stairways.

We have been told Governor Art Yap had said that if indeed laws are made for men- then men should follow them. Of course, as an experienced public servant, Yap also knows that executive orders are not carved in stone- and can be re-calibrated as the province goes through the changes in the dynamics in this one of the most turbulent periods in the world’s modern history- fighting an invisible faceless adversary that kills in wanton abandon.

Let us not contribute in making our leaders age prematurely by complying with local laws as long as they are not yet amended. We are all in this together- divided, we will surely fall.

LET’S BRING THE VIRUS BACK TO ITS HABITAT

THERE IS A VIDEO POSTING gone viral saying that the viruses in this world used to live within their natural hosts: animals and the deep greens in the forest.

Humankind, however, by its destruction of forests, the oceans and its widespread killing of animals for food, game and other human propensities- consequently destroyed the natural habitats of the viruses.

Thus, when the chance came to feed on a new host- a massive 8 billion bodies of humanity- COVID-19 virus decided to make humankind as its new habitat, starting in Wuhan, China last December.

But the virus says it has no intention of destroying mankind because for viruses to thrive, its hosts must remain alive. It does not want to wipe out humanity.

All the virus is asking mankind is to nurture-not destroy the animals and the plants- its own natural habitat by protecting not destroying the environment.

And until and unless humankind decides earnestly to revive Nature back to its original wonder- the virus may be stopped temporarily soon but it will come back – in the absence of its natural habitat-to haunt man back again as its only remaining hosts to dwell on.

Mankind- and each of us individuals-must answer this challenge of the virus now through the changes in our behavior as a people and as consumers of the world’s natural wealth.

We must bring Nature’s health back- the viruses’ natural homes- or face the grim prospect of man’s final extinction.  What is your choice?

You-  especially you, who have always laughed at the idealism of environmentalists. Shame on you.