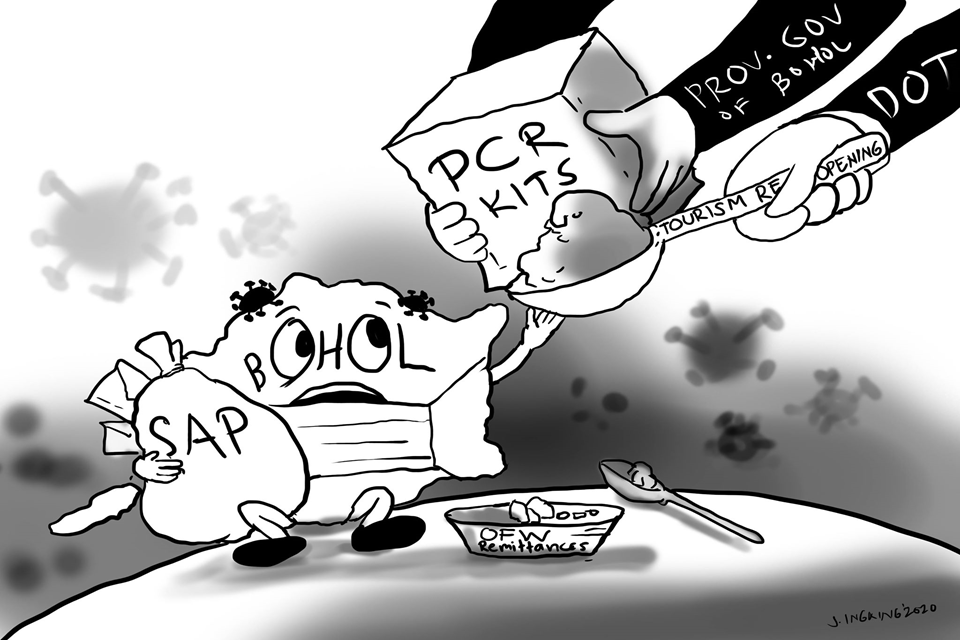 BOHOL, AS A TYPICAL PROVINCE-VICTIM of the Covid-19 pandemic, needs both an “Amelioration” program to provide a balm for those hurt by the virus and a “Recovery” Program to bring back a semblance of a new normal for its citizens.

The Bohol economy has been fueled by tourism and remittances of OFWs- both reeling in a gut-wrenching economic setback unheard of in recent history.

The Department of Tourism recently named publicly and specifically Boracay and Bohol as the most likely tour meccas to be allowed to re-open in a calibrated manner. Confidence is the name of the game, Gov. Art Yap says- of tourists believing in our health protocol as safe and Boholanos that the visitors do not bring the virus with them when they come.

Officially, the stand is tourism is “on hold” until the PCR Lab Test (Mobile) of government and that of the Gallares Regional Hospital are operationally in place- which means no earlier than July 15 (target gate). It is assumed that testing kits are available at sea and air entries and that tourism’s ancillary support industries observe the required health protocols.

It is a good thing, too, that there are enough “amelioration” programs in government in various stages of implementation.

These are the (LDRRMF) Local Disaster Risk Management Fund (estimates only at P138M) for PPEs, isolation centers and food;  Fund Assistance to Individuals in Crisis Situation (mainly OFWs and LSIs) of which approximately P 20M has been expended;

Fund for Crisis Situation under the Office of Social Welfare and Development (OSWD) for financial and food aid for those “communities under quarantine”.

On the other hand, people should know there is the approved “Bayanihan Grant to Cities and Municipalities” which is equivalent to one month of the FY 2020 IRA share of the locality. For Bohol the total is P40-M for the city of Tagbilaran out of the P12-B total budget for all cities.

The 47 Bohol municipalities, on the other hand, each has an allocation of from a low of P5-M to a high of P15-M per municipality or a Bohol total of P404M from the total Philippine municipalities budget of P18-B.

Each person and every municipality and city here has to be vigilant that they get their just share of the amelioration budget. Moreover, citizens should report any anomalies in the disbursement as scores of LGU officials (nationwide) have already been criminally charged for graft surrounding the distribution.

The latest report is that there were 22,000 cases of double-counting of beneficiaries in the amelioration distribution- the system is imperfect.

The “Bayanihan Grant to Provinces”  is a big help in strengthening the health care system of the 10 devolved government hospitals here.  A notice to debit was made on April 21, 2020,  wherein a total approved amount of  P 94.8M was indicated of which only P 28M was obligated in May and all programs  (thereof)to be implemented between July to December 2020.

Smaller amounts of P500,000 is for retraining and the same amount for disinfectants. The devolve hospitals, therefore, can no longer complain of a lack of facilities. equipment, medicine and personnel, from hereon.

What could possibly be a source of curious questions in the future may be the huge purchase of road maintenance equipment (under the same loan application) when such activity is normally given and bid out to private contractors. Does operating them under the provincial government make for efficient economics?

On the “recovery” aspect, Capitol had coaxed the help of the three Bohol congresspersons for Congress to hasten the approval of the Economic Stimulus program even as it pledged a P250M Guarantee Fund to match any loan that the two government banks can grant to the MSMEs (medium and small businesses).

The confidence of the lenders (DBP and LBP), of course, is based on the availability of the share of IRA (Internal Revenue Allocation) for Bohol which is based on population (50%), land size (25%) and equalization factor (25%). By 2022, as approved by Congress, more tax bases will be used in the computation of IRA equalization, thus, potentially enlarging the size of the future LGU IRA.

This confidence, of course, is balanced by the fact that with a currently weakened Philippine economy, the government will collect fewer taxes and, therefore, less IRA allocation for all LGUs. When will the national economic recovery actually start and, thus, inspire hope of projecting a stronger tax base for the government to collect from?

On the other hand, one of the major game plans of the provincial government is to slowly weed out Bohol’s dependence on Tourism as a catalyst for growth and shift some attention to the development of agriculture and aim for food security.

In an interview before national television last week, Gov Yap, who is a former agriculture secretary outlined some definite programs which the Boholano populace must measure him by ( in terms of percentage accomplishment) perhaps by December 2020 or a State of the Province Address sometime in July next year.

His agricultural pivot areas include (1) introduction of high yielding rice seeds producing 116 to 120 cavans per hectare from the present 80-100 cavans (2) promotion of 15,000 hectares of Bohol farms into corn production which then form part of the essential food supplement for livestock, poultry and some aqua-marine products;

(3) assist in the distribution of fingerlings and partial mechanization of 1,000 hectares of the present 4,000 hectares of idle fishponds in the province to produce inland marine food to answer the monopoly situation of sea fish by big-time Cebu wholesalers and traders and (4) obligate barangays to each cultivate at least 1 to 2 hectares each for vegetable production by impounding water from the highlands to cascade to the villages veggie farm lots.

Meantime, Gov. Yap will have his first major test case in the “Recovery” front tomorrow when he dares authorities to arrest him as he will allow the plying of public multicabs, jeepneys and buses on their routes per instruction from DOTR Secretary Arthur Tugade to him.

The LTO and LTFRB are at a conflict situation now where LTFRB allegedly ordered the arrest of operators of PUVs which are without “special permits” from LTFRB. Tomorrow will be a test case.

We hope there will no longer be an issue of similar nature in the near future as the other aspects of “amelioration” and “recovery” are already by themselves terribly daunting to any human being, let alone overstressed public officials.