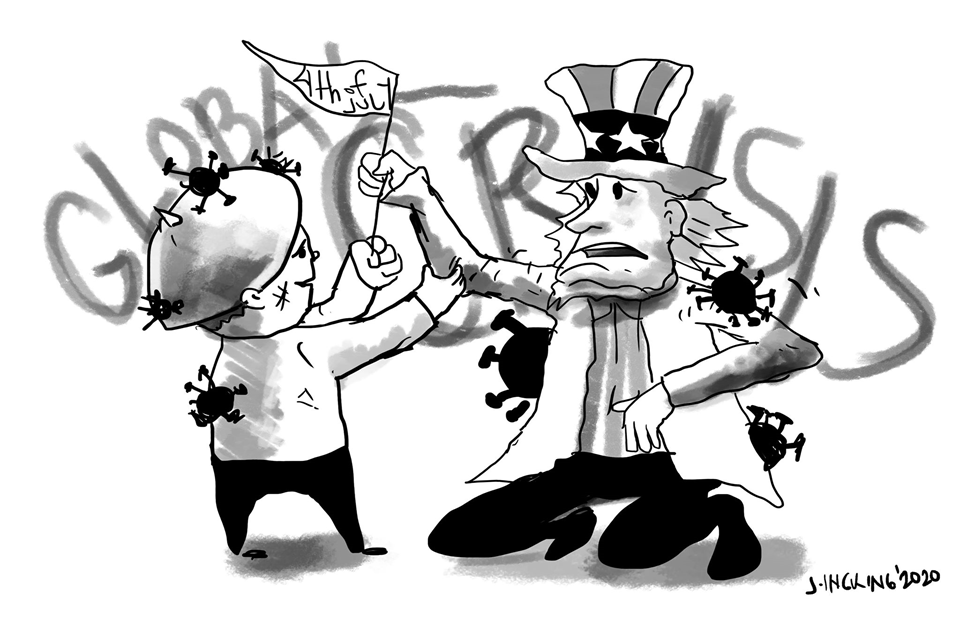 THERE ARE 4 MILLION FILIPINOS working in the United States of America- the second-largest  (2019)ethnic group in The Land of the Brave and the Free.

The USA has spent half a billion dollars to help the security of the nation from 2016 to 2019. The Philippines exported $8.6B and imported $12.7B to and from America (2019) making it the third-largest trading partner of the country. Americans still remain the largest foreign investor in the country with 600 members in the American Chamber of Commerce here.

In the fight versus terrorism and alleviation from natural disasters, the USA has been quite an ally. Spain may have given us Christianity but it was America that taught the Philippines democracy, government and education.

That is why, despite the pivot of president Rodrigo Duterte towards the China- Russia geopolitics, a staggering majority of Filipinos (based on an SWS survey) favors the Americans and are suspicious of the Chinese.

With Defense Secretary Delfin Lorenzana and Foreign Affairs Secretary Teodoro Locsin at the cudgels, the government was able to wangle a recent Supreme Court order to suspend the termination of the VFA (Visiting Forces Agreement) with nary a whimper from the generally anti-American president. Do they know something that we don’t?

No doubt, the USA needs the Philippine as the “backboard of the Asia  Pacific” relative to the South China Sea where sits billions of barrels of oil and trillions of cubic meters of natural gas- to say nothing about the stupendous catch of fish needed by China’s 1.4 billion population. More important, this is the navigational area where 35% of the world commercial trading ships pass through.

Sure, Washington may have Japan in the north and Australia in the south as political comrades but who will cover the underbelly flanks of the Asia Pacific region- but the Philippines?

Filipinos, therefore, look with special attention to July 4, 2020- “Independence Day” of America as a red-letter day not because we are little brown Americans living in a state of the USA- but because of our long-standing historic and now strategic relationship with her.

After declaring her independence from Great Britain on July 4, `1776- or almost 250 years ago- America has become a superpower. Starting from the great Spanish-American War which upended the Spanish colonial rule globally and which it substituted with an American invention called “American Manifest Destiny”.

Filipinos feel close to America as they “liberated” us twice -against Spain and the Japanese Imperial Army. Filipinos were so joyful when American Admiral George Dewey destroyed the last Spanish armada along the Manila Bay that the now Roxas Boulevard was initially named Dewey Boulevard  (in his honor) where the Manila was looked upon then as the Miami Florida of Asia.

Many Filipinos joined the American military after World War II -affected by the kindness and warmth of “GI Joe”- as they rode on their American jeeps in triumph after the war – distributing gums, chocolates and cigars to the “liberated” Filipinos. In fact, one of them was a first cousin- Benny Dejaresco-Canceko, of the US Navy who joined the fight in Vietnam and suffered from shell-shock and post-traumatic depression and returned himself to finish college here and become a pastor in Dumaguete City.

Fast forward to July 4, 2020, America celebrated its day in a more somber note- a very grave year in American history which can signal a turning point in its affluent and powerful history.

It seems America has lost its desire to be the global Robocop- lambasting many of the multilateral institutions like the United Nations, the NATO, the WHO and the Paris Accord on Climate Change. An isolationist- America has become- and the world hates a vacuum- which some countries will fill in soon. But why?

Internally, an author has described America as stricken with “frenetic intemperance” -influenced by a Hollywood culture- that favors money and fame over family and societal responsibility-  a government tagged by trillions in deficit and debt levels that may no longer be sustainable by just printing more and more money.

America is faced with a pandemic as with the rest of the world but many of its citizens are favoring “freedom to safety” and resulting in record-breaking numbers for the USA in terms of those Covi-infected and those who died.

Politically, that nation has been severely divided by an enigmatic and non-conventional president resulting in nothing getting done and immobility. When do you really recall of protestors to be just a spit and a jog away from the White House oval ever? There is an election in November but the issues that agitate the behinds of most Americans will surely divide them more than unite them.

Morally, it has been in favor of moral relativism and “me, myself and I” philosophy. Sadly, it seems to have lost the once vibrant sense of nationhood that made some Americans shed tears of patriotism just hearing their national anthem and the American flag raised on the pole. Where is this Lost America?

Another author depicted America as enjoying a never-ending pleasure cruise- not sensing where “its destination is” and “who is going to foot the bill”. No one wants to take the bull by the horns and would rather be distracted by the cruise’s  “next band playing” and the “next dance” while a gathering storm billows and screams outside the ship- depicting a world in deep trouble.

We do not expect another Atlas to carry the world on his shoulders. But perhaps we need a Big Brother we know who is always there – to be an exemplar of virtue, a restorer of order and global sanity and a leader with direction.  Not a hedonistic cruise ship numbed by the drugs of past success who does not see grave danger even when it is already gnawing at its feet.

Does the Philippines worry about America? Yes, we should be.

Though not as dominating now, when Washington sneezes, the whole world still catches colds.

MAKE NO MISTAKE ABOUT IT –  any one human life is always worth saving. However, we have always wished to temper paranoia when we contemplate of community safety in addressing the Covid-19 virus. Just to have the proper perspective- let us make comparisons with dengue.

The World Health Organization (check this out) says that dengue remains one of the leading killers in some Asian and Latin American countries that are with “warm” zones. It has grown dramatically over the decades with “half of the world at risk”, WHO continues. “Some 100- 400 million people are infected yearly”.Covid -19 has infected only 10 million (is that the reason why the brash President Donald Trump wears no facial masks in public?)

The “known dengue vaccine cure” called Dengvaxia has been placed under medical and ethical questions after all these years. More data, not opinions.

According to a medical article in the Manila Bulletin, from January to June 2020, there were 2,481 dengue cases in Bohol-up 37% from the same period last year with 13 deaths compared to 17 deaths total in 2019.  Extrapolating mathematically, the year-end dengue deaths could number 26. The DOH finds the number of deaths “alarming”. Covid-19 from January t0 June in Bohol is ( only 16 infected ? ) and one death. Are we missing something in these figures?

Do we ever consider warning visitors in Bohol that some wayward mosquito might come harm’s way and infect the visitors in the same way we have been quite Spartan with our efforts to keep people away from our shores because of Covid-19? We wonder and ponder on these thoughts.

Because even if Bohol is in MGCG, many people still -would rather have- the more stringent GCQ to remain. People are mortified that the “hard-headed” Cebuanos will filter their virus to us and that the other LSIs -without any testings from their origins will be infected and exceed our hospital and quarantine quarters here. (We have earlier postulated the present budget and national aid can still be stretched to increase our number of LGU quarantine rooms).

Yet, all over the world, only 10% of those infected by the virus are considered severe (therefore hospitalized) and therefore the remaining 90% are with- from mild to nil symptoms- can be addressed in LGU or home quarantines and most will recover. Remember the death ratio is 6% or less than 1 for every 100  Covid-infected persons will die.

Yet, some people are still paralyzed by fears in reopening their enterprises.  Other people are contented with the “ayuda” many have received twice. Well, ladies and gentlemen, that “ayuda” will not happen forever -because the government borrowed most of that money and will repay them eventually and cannot borrow on forever.

And we have heard straight from the horse’s mouth of Finance Secretary Carlos Dominguez that government “will not spend a single centavo to bail out businesses”. Cheap or even zero interests, yes- but hey, you pay the principal eventually. How can firms pay if they do not start reopening businesses partially now? Interest rates never sleep even on holidays or pandemics, Watson.

Decongesting the metropolitan areas is a government national policy. We can hem and haw about it all day long- it will not change the policy- we have to accept and deal with it. The LSIs and OFWs are coming home in droves.

Authorities have pegged the operation of the PCR machines as a requisite to the decision to reopen the tourism and other parts of the economy. Well, let’s put them to the task- they were the ones who pointed to July 15 as the day the government mobile PCR and that of the Gallares Memorial Hospital will be in place. Any other postponement must be with well-defended reasons otherwise people might lose belief in official pronouncements. We are just saying.

For those who lost jobs or livelihood, the government should start lining up for its provincial allocation in terms of numbers and compensation of thousands of the so-called “contact tracers” that will somehow offset the horrifying rate of unemployment these days and an economy going to a recession.

(Early confidential reports secured from NEDA says RP suffered a -6.7% contraction in the second quarter- and under economic parlance, an economy who goes through two successive negative growth rates per quarter is “in a recession” -whether it admits it or not).

Please do not get us wrong- we value the health and safety of our community- we are from here and teeming with our relatives and friends.

What we are pleading for is less fear-based policies and more open to a normalization of the economic flow- which when good for one will eventually be good for all.

(A final note on “Tuob”, The Bohol Medical Society led by Dr. Jeffrey Ong attests “tuob” is helpful but not a cure to Covid-19. For more varied perspectives, read “One Voice”, “Psyche’s Lair” and a news item in this issue.)