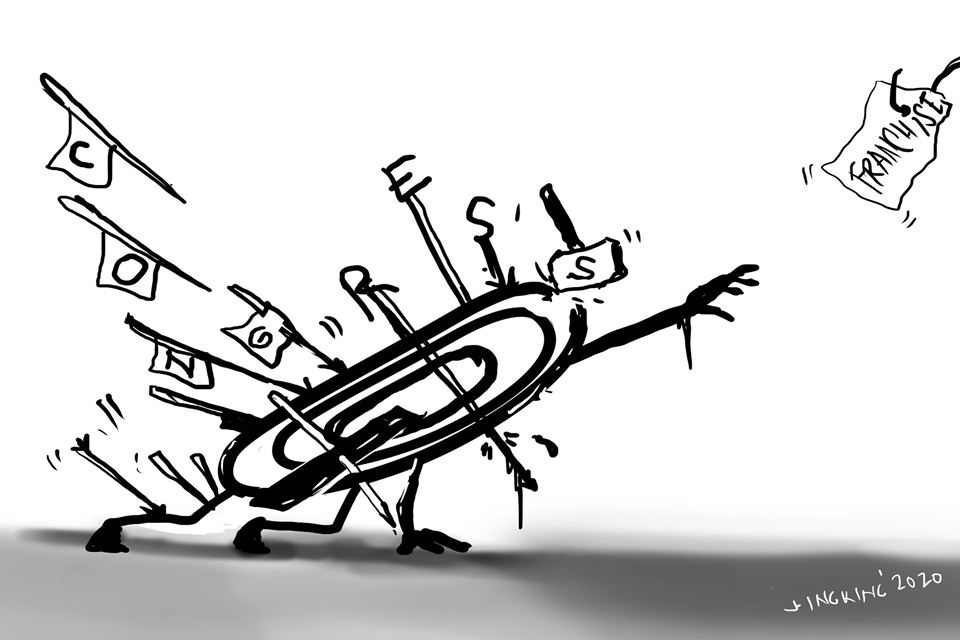 AS EXPECTED, BY A 70-11 VOTE, Congress denied the renewal of the franchise of  ABS-CBN, the nation’s largest news and entertainment network that has been around since the 1950s.

As expected, the congressional exercises were, like in the Erap and Chief Justice Corona cases,  more like those of a political rather than a judicial body.

Because, if it was acting as a legal body, then Congress should have given weight to those agencies ( who-under the law) like the SEC, BIR, Bureau of Immigration, DOLE, PEZA, NTC (even), MTCRB are the final arbiters of those controversial issues that the network has been accused of.

The fact that none of them took issue to bring these agencies of government to court for allowing these so-called “transgressions” of the network is perhaps because it may not have a chance of winning.

Here are some other observations as a non-lawyer at the sidelines of the proceedings.

Since the government agencies had declared that “dual citizenship means one is 100% Filipino” on the issue of the citizenship of chairman Gabby Lopez, Congress proceeded to question the so-called authenticity of the birth certificates of his two parents.

But Meralco, the Manila Chronicle and ABSCBN -utilities and media firms- ( only allowed to be owned fully by Filipinos)- have been in existence since the 1950s,.Was Congress, therefore, implying that all the past governments, congresses and supreme courts -for the last 70 years or so- 1950-2020 were all blind to this so-called “violation” as to the citizenship of the Lopez parents (whose family owned majority of these companies)?

At one point in the congressional hearing, it was asked if the Lopezes should not have been asked to pay money in order for them to re-acquire ABSCBN (after the EDSA revolt in 1986). It is a historical fact that the dictator FM forced Eugenio Lopez Sr to cede ownership of his companies by jailing Genny Lopez Jr,  for allegedly conspiring to assassinate him? ( Lopez Jr and  Serge Osmena III did a dramatic escape from prison after 5 years into exile to the USA).

To the layperson, doing this would seem like the Lopezes lost their car to thieves who for years used it-and when a new LTO declared Lopezes as the real owner- the latter should now pay “extra” cash for claiming their personal asset that has been stolen and depreciated by years of usage by others?

That would be a kind of justice found only on the planet Mars.

Likewise, it was alleged that there is suspicion as to the real owner of the land titles of ABS-CBN in Quezon City. This is like saying that over these decades while the Lopezes were yearly paying their real estate taxes (as required by law) on these properties- there was no doubt as to the ownership then except now – several decades after? All of a sudden?

ABS-CBN was accused of having diversified into related media businesses when there were still no specific guidelines on the same, as admitted by the NTC itself, when to our layman’s mind “what is not prohibited by law, is allowed.” Which is which, Watson?

In another matter, the network was accused of ceding “ownership” of the media to foreigners by accepting FDRs owned by foreigners (practiced by many companies including rival GMA 7). In our moderately long experience in corporate life, control is exercised almost solely- at the Board of Directors or the Executive Committee levels- where the FDR owners were never represented in the case of ABS-CBN. No dividends were ever declared to the FDR owners unlike the real Filipino owners of the network over the years.

The funny thing is the same Congress recently approved that Philippine media could now be 100% owned by foreigners- they must see some merit in that foreign ownership, in the least, for they approved it. Of course, it is beside the point, Watson.

In the apex of pettiness, it was mentioned- that in two cited years, ABS-CBN only paid half a billion pesos per year while a rival network paid one billion pesos in taxes per year in similar years. Yet, it was a sworn statement of the BIR  which stated in the hearings that the total taxes paid by ABS-CBN from 2015 to 2019 amounted to P15-Billion total. That is an average tax payment of P 2.5 Billion a year.

Also, we are quite familiar with the operations of the PEZA where investors are incentivized by the government with tax shelters so that they would pitch camps therein. Perhaps all major  Philippine conglomerates and many medium-sized firms have trooped to PEZA  (with affiliates) to enjoy these legal tax shields including The Big Dipper of the Lopez Group.

For this, the group was roundly accused of Tax-avoidance- which by the way, as the name suggests, is not illegal here in the same way that tax evasion is. Why – The Big Dipper was singled out does not remain a mystery to many.

On the issue of labor-management relations- today- are pending and lists of resolved cases of labor disputes over many years involving almost all companies in the country.  ABS-CBN,, with its large base of over 11,000 employees – by statistical probability- would normally, therefore, have such cases at the DOLE.

Among the “witnesses” presented as a victim of “unfair” labor practices was Jobert Sucaldito, radio-TV host anchor who was suspended for “one month without pay” by the network for suggesting on-air that a depressed star of the network should “jump off a building” as in encouraging suicide. Unfair?

Nobody, much less a corporation, is perfect. Such imperfection was proven in the offer of ABS-CBN to return to president Rudy Duterte P5-Million in poll ad funds which were not aired with the corresponding poll promotion in media by it.

In every election, including the 2016 presidential elections, the network (as other networks, too) has always been accused of unfair coverage (some more than others) by all candidates. That all the candidate camps were complaining simply means all of them felt shortchanged- so the “inequality” of news coverage treatment was universal and not selective.

In fact, it is a credit to Philippine media, that through the years, it has tried to remain as much as possible – to be apolitical (they do not always succeed). To our knowledge (we can be corrected) prestigious papers like Time Magazine and the New York Times- even on the eve of elections-  actually endorse a specific presidential candidate, as an example- to prove how politically biased American media can be compared to ours.

Of course -all of this is water under the Pasig River, so to speak. This is Monday morning quarterbacking as armchair coaches after the game- for Congress had already spoken.

We are sure the 70  that voted against and 11 for- have their own appreciation of the facts and are ready to answer their district constituencies if they seek reelection in 2022 as to why they voted as they did.

Meantime (see Solita Monsod’s column Saturday, July 11,202o in the Philippine Daily Inquirer) there is a nationwide survey saying that 92% of the Filipinos thought ABS-BN deserves to have its franchise back. On the other hand, our own surveys here locally through sister station dyRD showed 72% thought ABS-CBN had some lapses and deserves the “No” Vote.

That only means we are all white, black and gray- in matters of public opinion, we have different experiences and expectations in life. Or it could be that 72% of those who voted “No” here belonged to the 8% in Monsod’s referred survey.

Be that as it may. To us, the real test of credibility for a media entity (regardless of whatever anyone says) is public acceptance. The fact that ABS-CBN remained, doubtless, the country’s No 1 source of News and Entertainment through these many years- means the public believes in their credibility and attempts at excellence to please their audience.

The radio-TV network may have lost its exclusive frequency and the NTC can, therefore award it to the highest bidder. The winner can only hope to capture the imagination and loyalty of a vast chunk of the Filipino audience which ABS-CBN built painstakingly since the 1950s. To the new owners- our best of luck.

For now, the network will have to shed pounds – lay off employees – in order to keep the best ones and be in fighting form. With many of the best talents in town (news and entertainment) inside their tent- they can “can” shows and find a way (legally) to still reach their audience here and abroad -aside from their existing current platforms that cannot be touched by NTC ( cable, internet etc).

Years from now, who knows, the Lopezes and their band of talents, may again seek a franchise under a more benign political atmosphere and be back to “where it belongs.”

Being a media entity- and a follower of events and entertainment, we are saddened, of course, that the “free” radio-TV frequency has been denied access to many of the “Madlang People”- who in this horrific era of viruses, joblessness and deaths- need a free “elixir” of life in free entertainment and need one more credible option to hear news – the better for these poor souls to combat the challenge of this pandemic crisis.

But, in the end- we respect the opinion of the 70, this is a democracy as they should also allow other contrary views. And we wish ABS-CBN (or what is left of it) still the best.

For in boxing as in life, a knockdown is not a knockout.