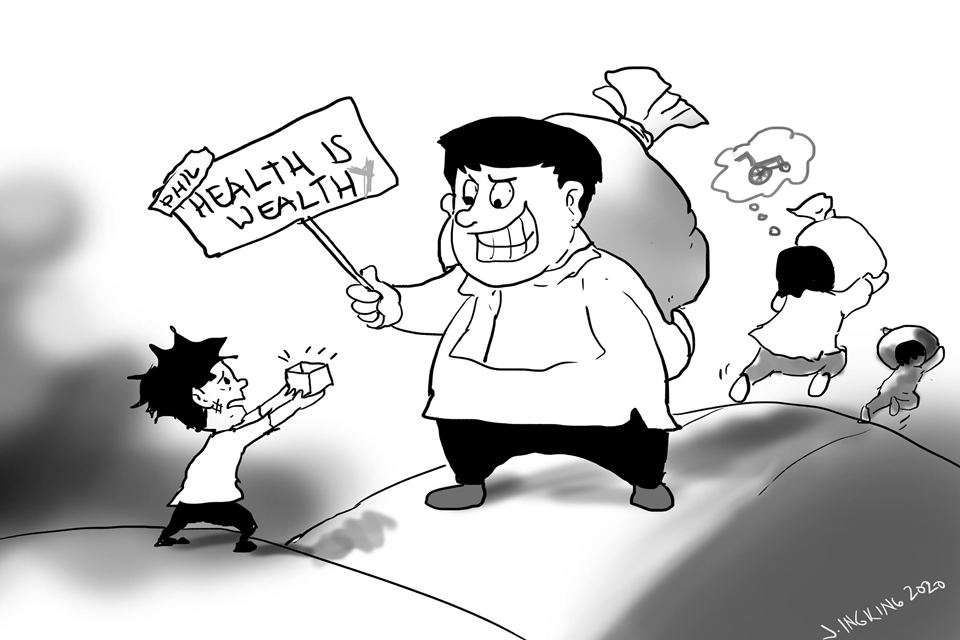 ”HEALTH IS WEALTH” IS A SATIRICAL PARODY  popular in social media this week.  It means if one wants to be rich – fitchy rich- be a Philhealth official.

The insinuation seems to dwarf the former citadels of corruption in the country, namely, the Bureau of Customs (BOC) and the Bureau of Internal Revenue (BIR). Small comfort for their relative -crooks in government. They have just been overtaken in the race to hell.

Boholanos were, however, not surprised hearing the huge corruption at PhilHealth. Shocked by the humongous amount, yes- but not on the act of corruption.

This is so because their point of reference was the glaring connivance of the then “Medicare” with the various hospitals in the province. The government’s health care system has been corrupted ever since with their “partnership in crime”. This was echoed by Boholano clients of PhilHealth during a random radio survey conducted by sister station dyRD’s “Tagbilaran By Night”.

In fact, Bohol was ranked then as one of the top 5 provinces where there were the most “ghost patients” claiming millions worth of insurance benefits.  This malpractice has painted the image of PhilHealth as a “Hall of Famer” ” in corruption here.

In the same radio survey, Boholanos decried the prostitution of this health care assistance program by greedy officials pocketing the monthly payment of workers as their contribution to their health insurance program over so many years.

Congress is currently investigating Philhealth, not just for a “whiff” of corruption there but a seeming forest fire with killer fumes that have raged seemingly over many years- run by a Mafia.

Current Health Secretary Francisco Duque III has been a  Philhealth “fixture” since 2001 when he was appointed Health Secretary by President GMA till today where he sits as chairman- being the top health cabinet official. He has been dubbed by others as the “Godfather” – the Don Vito Corleone of the Philhealth Mafia, who continues, nonetheless, to have the trust of the president.

In defending Duque, the president once aired on TV that ” I know the Duque family. They are very rich. Rich men don’t steal.” or words to that effect. “Tell us about it”, the barbers in the sidewalks say in jest.

Many of the Philhealth officials are on preventive suspension or taken leaves of absence while its top two officials (President and EVP) are very ill even as Justice Secretary Menardo Guevara heads “Task Force Philhealth” which will wrap up the investigation in 30 days. One whistleblower says the loot is P15-Billion.

The accusations include anomalies in the disbursement of the P30-B advanced IRM (Interim Reimbursement Mechanism) to private hospitals for Covid-19 purposes that went astray to parts unknown. Some P 14-B has been disbursed. Others:

P730-M in questionable IT projects of the P1.2 Billion budgeted multi-year in the same amounts. Ghost dialysis and cataract operations and “upcasing” mere cold cases to pneumonia to secure bigger Philhealth coverage by officials. The Red Cross, complained chair senator Dick Gordon, was only given P100M of the P 700M budget so the Red Cross has stopped buying PPEs and setting up testing laboratories. Where’s the money, boys?

The suggestion that “plunder” be filed against the erring crooks is called for. “Yayarin ko kayo” said the anti-graft president- so have the plunder charges filed, Mr. President. Let us not be sidetracked by some of the officials’  sanctimonious waiver on the “bank secrecy law” so they can be investigated for ill-gotten wealth.

We do not live in the ancient “Criminal Land” today- pay-offs are never made directly to one’s bank accounts now. They’re credited to other persons’ names or unnamed accounts in the Cayman Islands or some other tax havens. Let’s stop this masquerade, boys. Or were you born yesterday? Book them, Watson.

Now, the bright boys at Philhealth do the “squid tactics” and try to strike fear in the heart by saying that the Philhealth will go bankrupt in two years- no thanks to wholesale corruption- and noting potential losses of P90-Billion in 2020 and forecasted at P147-B (2021).

This much we know in finance. Insurance companies make money by investing the billions of insurance premiums in various forms.  That incompetence in handling the “free investible funds” of Philhealth leading to losses) should also be investigated- whether they were invested with arms-length consideration and judicious economic sense.

If not, aside from hanging the guilty by the guillotine (figurative) we should also heed the call of one smart lady congressperson from Marikina, this time, we rightly address her “The Honorable” Representative Stella Quimbo who suggested we may have to “privatize” Philheath- to prevent it from being politicized and being converted into a “den of thieves”.

Ambassador Babes Romualdez says “stealing is bad enough, but stealing from the sick and the poor..” you, ladies and gents, finish the sentence and send it to Satan for his proper disposal.

THE INCLUSION OF A BOHOLANA DOCTOR among those eleven suspended Philhealth “officials”  by Ombudsman Samuel Martirez amidst this raging and glaring expose on big-time corruption is a case of mistaken identity. She already stepped down in 2019 after a “ghost dialysis” controversy erupted there while she was sitting in the Board representing the OFWs.

Former Philippine Health Insurance Corporation (PhilHealth) Chief Executive Officer (CEO) Dr. Celestina Dela Serna who was then appointed  (April 2017) by Pres. Duterte as officer-in-charge President and CEO of PhilHealth admitted that she must have stepped over a big toe at PhilHealth hierarchy thus she was dragged into controversy while performing her job as OIC prexy of PhilHealth back in June 2018. It was over a small issue on “travel expenses” not on any graft nature, that she was shown the door.

In her short stint  (about  year) as PhilHealth OIC President and CEO, Dela Serna was very active in the campaign against corruption and was believed to have rubbed the wrong way some well-entrenched officials luxuriating in their cushy positions for decades.

As a neophyte in a government corporation with no record or reputation of corruption, Dela Serna boldly implemented a rotation of personnel that possibly drew the ire of officials.

She  was “surprised and disheartened” when her name appeared in several news reports as allegedly among those ordered suspended by the Office of the Ombudsman.

In a press statement to the Bohol Chronicle Dela Serna stressed that “for the record, I had long officially severed my ties with PhilHealth and had no connection with that office since I stepped down as a member of the Board of Directors in 2019.”

According to the press statement of Dela Serna, the Ombudsman the suspension order is “just one of the many harassment cases which old-timers of PhilHealth boldly threatened to file against me.”