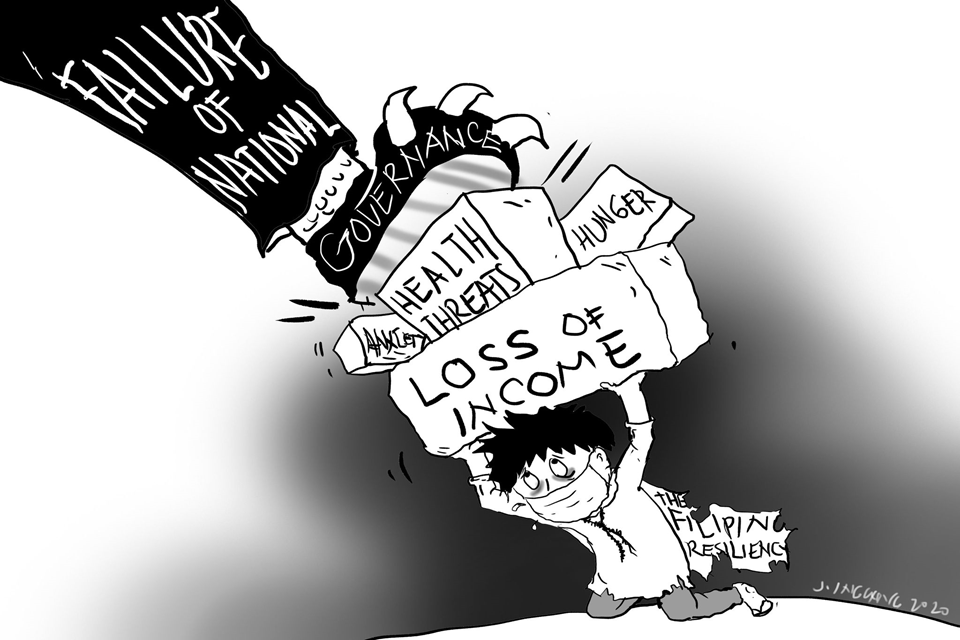 PERHAPS IT WAS A LETHAL COMBINATION of a people- hungry, angry, and anxious- due to health threats and loss of income- that may have finally broken the resilient back of Filipinos. To such extent, that it had broken, as well it seems, the magic spell cast on them by an otherwise novel president who started out with a ton of political charisma.

It was probably the people’s frustration with the sheer mismanagement of the Covid-19 tragedy by the national government who continued to operate “oido” and failed to provide a “rational map” to lick the virus that started it all.  They were looking for a “management blueprint” – with strategies and tactics- with timelines and accountability that corporations always do when faced with an enormous crisis such as ours.

Numbers do not lie. The Philippines has the longest lockdown (varieties) in the world but also with the highest number of cases in Southeast Asia- displaying, if nothing else, the frustrating inability to address the health and economic issues of the pandemic that tore this nation apart.

Of course, people look up to the president, we are after all a presidential system, for guidance and leadership and maybe found little or none. His penchant for a military-style of “management ju-jitsu” to wrestle down a medical and economic giant of a problem just was not working

People looked hard and although the emperor still had clothes on -his robe was tattered- when for four years it was strutted around like a fashion plate, the toast of the town.

Then, the talks of the president’s grave illnesses, of “perpetual isolation”, the near crying outburst of the normally defiant secretary of foreign affairs were capped by a medical bulletin stating that the president had a “near cancer” of the esophagus.

People, instead of being comforted, were aghast at these “verbal calisthenics” -saying a “near cancer” is non-existent similar to calling a woman as “slightly pregnant” even as the flamboyant spokesperson was beside himself explaining what “perpetual isolation” means- two words easy to understand even without Webster’s dictionary.

The issue has become one of credibility. And Boholanos, known to have rewarded the president with a landslide victory here and unstinting support (as Boholanos are wont to do for national incumbents) for a good part of four years, seemed to reflect the national mood- based on a recent survey of the popular “Inyong Alagad” of sister station dyRD.

For the first time, President Rodrigo Duterte got a failing mark from the Boholanos on two issues.

One is the recent multi-billion anomalies at PhilHealth Insurance Corp. His tenacious “defense” on the possible culpability of PhilHealth officials like its chairman-DOH Sec. Francisco Duque III got the President the ire of the Boholanos especially when he said in public that it is remote for a wealthy guy like the DOH chief to be involved in graft and corruption. That does not tally with reality, the Boholanos remarked.

Second, is the issue of having a “revolutionary government” until December this year. In that radio survey – 92% of the respondents said they no longer would believe in President Duterte citing- two statements he issued last week.

First, that he will personally file the cases against corrupt PhilHealth officials. Second, he does not know these people behind the proposed “revolutionary government” en route to a parliamentary form of government.

With barely 21 months left for the Duterte administration, every correct thinking Boholano would pinpoint to the “loyalists” of the President as the prime mover in proposing a revolutionary government in a bid to perpetuate some people in power, not necessarily the aging President himself.

The RevGov Movement is reportedly led by Makati’s  Bobby Brillantes who has an infamous record of having done not so “brilliant” political moves in the past.

A great majority of the Boholano respondents echoed their response saying “dili na jud mi muto-o” (we will no longer believe) the President. It was a surprising and revealing reaction from the Boholanos who have always been (to a shocking fault) supportive of the President.

During the first four years of his administration, very few Boholanos would criticize the President even during those times when he lambasted the Catholic Church, shamelessly called God sacrilegious names and the church hierarchy as corrupt and full of perverts.

The widely-known religiosity of the Boholanos seemed to have been replaced by a combination of fear and awe- and failed miserably to defend the Church as people would justify whatever the President says plus the relentless badgering of the well-paid trolls in the community.

In last Wednesday’s radio survey something has been proven otherwise. People felt some shift in sentiment – hard to describe in words but one knows it when it happens as when one gets a bum stomach. The PhilHealth corruption and the move for a revolutionary government probably awakened people to the reality- by merely separating fact from fancy.

The titanic hardships heaped upon the backs of the people in pandemic was the aggravating circumstance that probably crystallized their position into hardened ice.

In fact, of those who gave the President a failing mark, 35%   of them said they voted for Duterte and they used to be strong believers of his leadership. But, not anymore this time.

A respondent even enumerated the “corrupt” guys whom the President defended like those in the Bureau of Customs. There were others who were axed for graft but got re-appointed somewhere and no big fish really landed in jail.

The majority who expressed disgust on the recent statements of the President recalled that the first failure of the President is the unabated proliferation of drugs and the absence of drug rehabilitation centers in the country. The “RP-Drug Story”, is, instead, represented by heaps of dead bodies of hapless drug users/small-time pushers and very few drug lords and major suppliers.

The fight against Covid 19, on the other hand, probably exemplifies in a dramatic way that perhaps the government may be operating without a “real head” who should put order into chaos, plans into action. For instance, on one single day, one agency advised public utility drivers to refuse rides to “seniors and those below 20 years old” while the DOH confirmed that more than 60% of those with Covid 19 are between the ages of “20 and 40”

Juan de la Cruz was tempted to curse whoever invented “stupidity” and then passed it on permanently to some people in positions of power.

The Boholanos likewise expressed disgust over the flip-flopping policies to fight Covid 19. The forced sending of Locally Stranded Individuals (LSIs) from Manila to the provinces even without having a rapid or PCR Test is glaring mismanagement on the part of governance.

For any “probinsyano”, this is a failure of the national leadership to protect the provinces and left the governors, mayors and barangay captains (no choice) to accept the thousands of LSIs with no medical tests to know whether they are infected or not. This is the height of insensitivity -making the new call for “Balik -Probinsiya” program, a movement tinged with hypocrisy.

Boholanos during the survey said that while billions of pesos go down the drain due to corruption, the government did not care to allocate a substantial amount for the testing kits for LSIs going home to the provinces.

Many of the LSIs were seen on TV- without shelter waiting for trips for home-(and CQs changing every 15 days)- naked to attacks of nature- under the overpass streets, beside the “Libingan ng Mga Bayani” and every available public space- without sleep, food and medicine that it had to be many times the private sector that had to mercifully care for them before they got a ride home.

Where was their priority amidst the pandemic?, asked the Boholanos. Billions have been borrowed and spent to ameliorate the crisis situation, where did all the money go?

Yes, they established PCR laboratory centers- but too late- when the LSIs were already back to their homes, some of them bearing the deadly virus with them.

In fact, the recent upsurge of Covid positive patients in the province concentrated in two island barangays is a by-product of the high level of contamination in our neighboring province of Cebu.

This systemic failure is probably repeated in most provinces so that If a national survey will be conducted, the sentiment of Boholanos on the “failure of national governance” will just be replicated.

Has the political wind indeed changed 360 degrees? If so, it needed no destabilization from terrorists, media, or the opposition. Bumbling, incoherent governance did themselves in.

What a tragedy this has been.