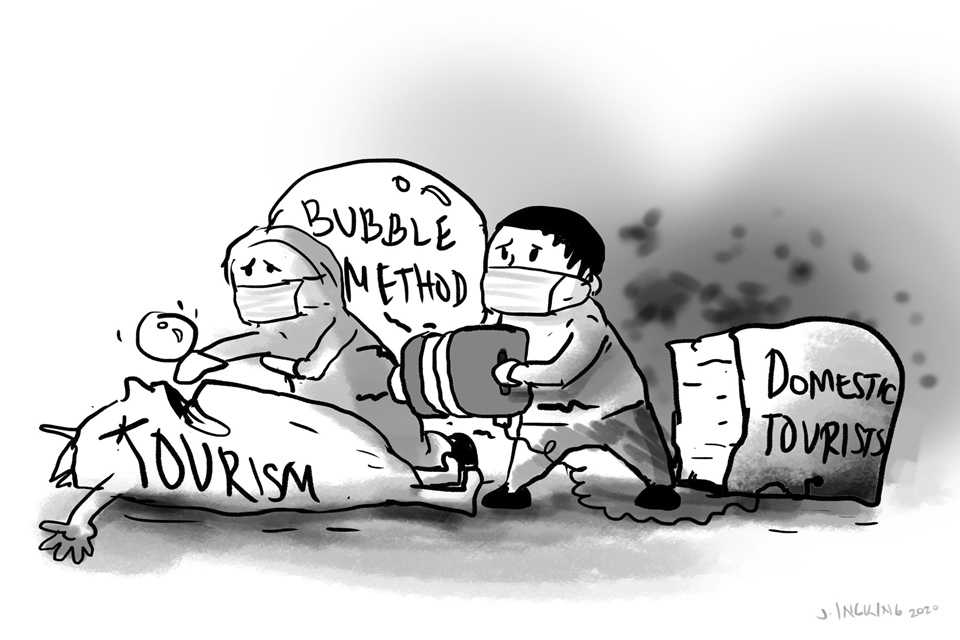 DOUBTLESS, TOURISM IS AN IMPORTANT cog of the Philippine economy. No one will object to any bid to resuscitate the comatose industry.

It is the province’s fortune that  Bohol has been chosen to host this year’s biggest travel event in the country which is the Philippine Travel Exchange (PHITEX)2020.

Having been chosen as host of the event is already big leverage by itself in terms of promoting and reminding the world that there is such a beautiful island in the Philippines called Bohol. A “shining, shimmering splendor”- if  ever you saw one.

A total of 44 sellers of tourism properties and tours arrived yesterday at the Bohol Panglao International Airport to attend the Phitex which is being held at the scenic resort, Bellevue Resort in Panglao Island. Since we are under the pandemic protocol, the 44 sellers will undergo a five-day quarantine at the resort before they can start rolling their sleeves to visit the destinations in the province.

True- it’s a totally different ballgame. Who could ever imagine that our visitors will have to undergo a medical test as all of the delegates will all be subjected to a  PCR test on Thursday- results of which will be released within the day.

This process will identify those who can join the point-to-point tours prepared by the Bohol Federation of Travel and Tour Operators.   (The Phitex is a collaboration effort of the government and private sector as the transportation is provided for by the Bohol Confederation of Bohol Tourists Transport Operators. )

But the big question remains whether this marketing and promotional effort will gain the desired attention amid the pandemic.  Even the international buyers who will be glued on their zoom meeting gadgets starting on Wednesday will just be like spectators of what’s going on now in the Philippines. But, will they be bringing tourists? This will remain a big question mark even after Phitex.

What will be waiting for empirical evidence is the question on whether a five-day quarantine for tourists, once they will arrive in Bohol, will not turn off potential tourists from coming in here. It would still be difficult for under “new normal” for anyone to travel to another country, the way we see it.

Of course, on the other side of the fence, the uproar of the thousands of jobless Boholanos to reopen tourism in the province is deafening.  It remains a fact that the biggest jobless sector in the province belongs to this industry.

But needless to say- the health concern will remain as the equalizer versus this legitimate demand for the recovery of Bohol’s economy. No one in his right mind will favor the opening of tourism at the expense of the risk of having the residents or the tourists contaminated with the virus.

But when we speak of health safety- then we state the obvious that we would need more PCR testing laboratories at the international airport and the others near the major seaports in the province.   This is the only way that incoming passengers, tourists, traders or balikbayans could get quick results of their PCR swab test.  Then the five-day quarantine may no longer be necessary? Or becomes significantly shorter?

It is unfortunate that despite the two existing PCR laboratories in the province, there is a backlog of releasing the results like in the case of San Miguel town where the results for the 30 or more specimens could not be known even after several days.

Per the latest figures from Manila, there is now a locally-made (not imported) lab test costing P8 million.  If these are ready to operate then perhaps, our three congressmen can allocate funds for more PCR lab s here.

Not only the solons, but perhaps even the town mayors under the League of Municipalities can put their budget together to buy several PCR laboratories to be placed in strategic locations in the province to service their respective constituencies.

As to the overall tourism recovery (which dropped 80% globally according to the United Nations), many nations are looking at two saving cogs: domestic tourism and the Bubble Method.

Bilateralism works -be it between two provinces or cities- or two nations as the China- South Korea (business tourism) and the Australia-New Zealand dynamic synergism have proven. We should try it for size.

THE GRIEF-STRICKEN NATION is not in the mood to witness a zarzuela (play) – an extravaganza that involves Philhealth, a national health insurance company so vital in times of a pandemic.

So huge has the “loot” of graft been in Philhealth that it made its classmates in the Corruption School like assorted the crooks in the BIR and the Customs look like St Peter and St. Paul. That the looting is done over the carcasses of the “sick and the poor” represents acts of a breed of criminals that is bereft of a soul- and, therefore, incapable of “soul searching”, Senator Ping Lacson avers.

After a revealing senate investigation- 13 officials led by Chairman Francisco Duque III (chairman) and then president Ricardo Morales were recommended for both criminal and administrative prosecution.

The 77-page senate decision named the charges: Graft, Malversation of public funds and property, gross neglect, tax violations and concealment of vital documents. The Palace said while it respected the senate report, it will await a more “in-depth” report from a Task Force that included the Department of Justice, the Ombudsman and the Civil Service Commission.

Later on – such “in-depth” 170-page decision was  exposed to be wearing “kids’ gloves” and did not include in its finger-pointing the lead actor Duque and a shadowy former legal SVP Rodulfo Del Rosario. The nation cried a collective howl  of “Aww, shit”that reached up to Washington and Beijing and the senate was “dumbfounded” (Senator Sotto’s word, not ours).

The highly-opinionated earthquake shook  Philippine officialdom to their senses- realizing the nation is already tired of  a “moro moro” ,a “lutong macau” justice system and was in no mood to watch another zarzuela after they closed independent media ABS-CBN.

So, the Justice Department and the shark-watching presidential spokesperson fell over one another  the following day -pontificating that the “report was just preliminary” when the word”preliminary” never appeared when they first submitted the report to the president on September 15.

Sensing the ill-tempered national mood, posthaste the President met with Senate President Tito Sotto and Speaker Alan Cayetano. The pow-wow resulted in the President agreeing that the Finance Secretary, not the Health Secretary should chair Philhealth.

The replacement is perhaps the first covert admission of the Palace of the incompetence of Duque -as a manager, gate guardian of risks and custodian of the nation’s health welfare. For the moment , we can leave the alleged “graft side” of Duque III behind- which hopefully,the Ombudsman can ascertain soon -having “motu propio” powers of prosecution, independent of any “task force” and hopefully -oblivious as to where the president wants what side of his bread is buttered.

A bill has been filed in the Senate replacing Duque with Dominguez.

A second consideration is under study- to finally put Philhealth into private hands- privatized- to prevent it from being politicized and turned into its current “den of thieves”.

The task force is asking for another 30-days to “finalize” its “preliminary” report and netizens are quick  to point out that such is an eternity of time for the Houdinis in Philhealth to make documents and computers  magically disappear.

As had happened in Region I – where “roof leaks”  in Pangasinan were deliberately allowed to rain on the Philhealth office- destroying vital documents and computers which  even pro-adminstration Senator Migz Zubri (a Covid victim) said was  a deliberate attempt at “foul play”.

So far, the nation is not amused. And its panned- out patience is now razor-thin.