US’ collapse endangers the Philippines 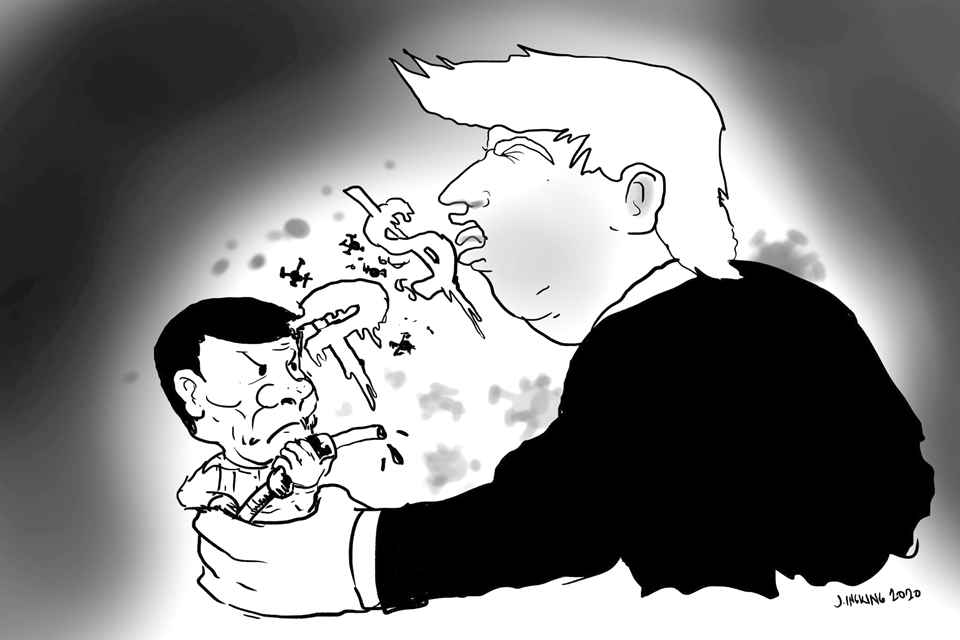 US’ collapse endangers the Philippines

The world was shocked -though not surprised- when American president Trump recently contracted Covid-19 and is now under medication at the Walter Reed Military Medical. He is nursing four signs of the virus- though not in a severe stage.

The sidelining of Trump for perhaps 14 days -unduly cramps his presidential campaign for reelection in polls where 198 million Americans will vote on November 3. Democrat candidate Joe “Sleepy” Biden is leading the surveys. The two -week absence of Trump can be crucial.

Many think tanks observed that given the psyche of Trump, win or lose, he will never concede defeat or anything that diminishes his pride. It is, therefore, important for Biden to win by a landslide on Election Day to prevent a dangerous stand-off.

Eighty-four percent of Americans according to the Washing Post survey would want to “mail” their votes which Trump already condemns as “fraudulent” in favor of the Democrats and that he will contest the results.

He said “fake votes” will be manufactured out of arch-enemy China (where the USA is waging a trade war) even as people remember how the Russians continue to be suspected of influencing the 2016 poll victory of Trump over Hillary Clinton.

There are many US states who made barriers (of which NBA star Lebron James had protested) so that the black, the young, and the poor will have a hard time casting their votes. The belief is the more turnout of voters, the less chance Donald can win the elections.

Doomsday forecasters say an “instigated violence” will happen on election day- suspend the canvassing and use the ensuing uncertainty for Trump to stay in power.

Given the temper of the times with 31 million Americans now under welfare (without jobs) it is an extremely volatile scenario, and stopping the peoples’ will, God forbid, could trigger a civil war.

In 2016, Trump actually lost by more than 2 million popular votes to Clinton but won the electoral voting. The 583 electors this year will be decided by the Senate and the Lower House for which the two parties are now fighting tooth and nail over.

America cannot afford a civil war because it is already suffering from a recession – meaning two consecutive quarters of negative  GDP growth. Since GDP was tracked in 1947, the American economy never slid by more than 3% in any quarter since then. In the second quarter of 2020, the USA’s GDP collapsed by 9 percent- sending chills it is headed for a recession worse than the 1930s.

On top of this, America and China, two of the world’s largest economies, are in a debilitating trade war wreaking havoc on many sectors of their respective economies.

A deeper collapse of the American will, certainly, hurt our country further.

As of 2015, there were already 3.9 million Filipino immigrants in America, the biggest foreign group next to China  – many Filipinos (48% of them) having bachelor degrees, higher than even the American average.

In 2013 alone, these affluent Filipinos in the USA were remitting US$25 B that year in cash to their Filipino families here; but many of them have since lost their jobs or closed their businesses.

A further collapse of the American economy and political chaos will grossly weaken OFW remittances, exports and remittances to and from America to here.

This will help exacerbate the P2-Trillion loss to the Philippine economy and about 7-15 million additional jobless here just resulting from the pandemic. The government had tried to stop the economy from spinning out of control by a load of borrowings to support its increased budget. This is unsustainable. ( See “One Voice” this issue)

In sum, we need to fix our radar and watch as well very keenly on the developments in the USA. One thing sure- this country will suffer proportionately to the slow decay of American progress.