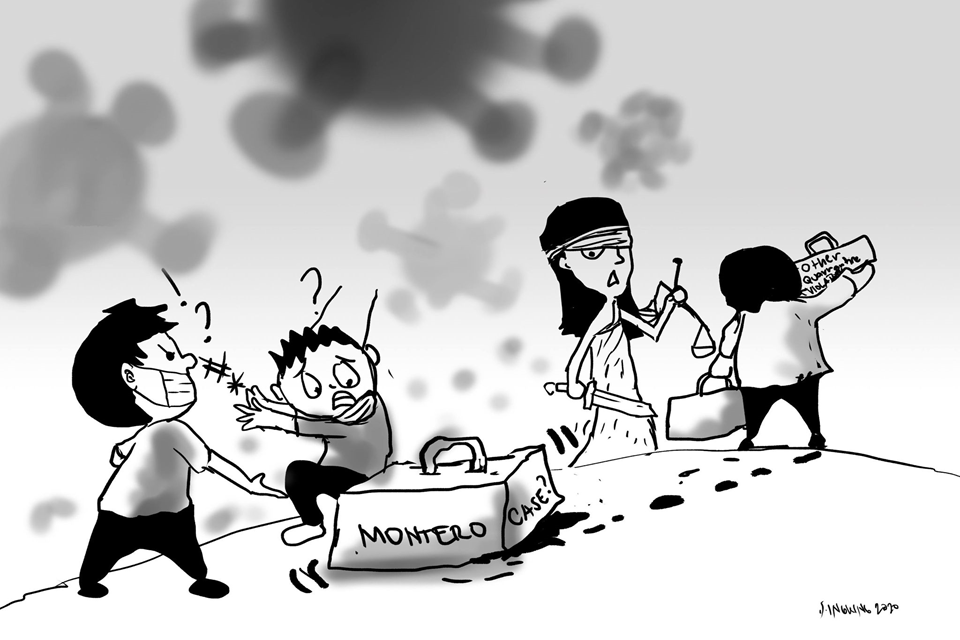 THE 8-PAGE ‘MAYOR MONTERO PROBE REPORT-  conducted by Col Joselito Clarito, head of BIATF Security  Cluster that “dropped and closed” the case against the Panglao Mayor Leonila Montero and 16 others (“company”) begs more questions than answers.

At the crux of the matter, in our opinion, is the fact that Provincial Ordinance No. 2020-22 is a law that therefore lords it over any (mere) issuances of the regional and national IATFs that purportedly allows authorized public officials to be exempt from local safety and health protocols.

To our mind, the spirit of the exemption in the  IATF issuances was to (merely) facilitate the entry and exit of important (national/regional) government officials who may need to execute crucial tasks in the provinces and should not be unduly burdened by local protocols.

Governor Art Yap, who is a lawyer, knows this. That is the reason he wanted to mesh the contradicting elements of the local and extra-local, realizing there was probably a conflict. But, nonetheless, at the time the violation was cited, the prevailing law should apply.

Yap and other government officials and private sector members knew they were at risk for having dealt with the town mayor (after an unauthorized trip)  causing their self-quarantine.

But Yap seems to be conveniently hiding behind the “giving every man due process” clause- in not strongly intervening in this act viewed by most people as a clear abuse of authority and endangering the very people they vowed to protect with strict protocols for the rest of the populace.

This “anti-people” violation makes Boholanos enraged and quizzical why it has now gone into its 40th day since the violation and the law and the BIATF still- did not even endorse the “Third” report of Col. Clarito, throwing it instead to the Legal Team to sort out its nuances.

Many people are now  (through their Facebook posting including that of the Governor’s)  looking at the governor as the new  “Pontius Pilate” since as head of the BIATF and based on facts established already in the public eye and even admitted by the mayor – he could have already rendered judgment on this case. The humorists suggest Yap would be a good “poster boy” for handwashing amidst a pandemic. He did not look like a good and resolute crisis manager in this case.

While it is true that one does not make policies based on postings on Facebook but they do reflect the sentiment of a people that a provincial chief executive should not ignore.

Since the “required 14-day quarantine” is no longer an issue (having past time) and only a P5,000 penalty remains applicable at least on the admission of the mayor of not having obtained a clearance from the Capitol for the Cebu travel, what will now prevent  Mr. Boholano de la Cruz to violate laws- travel to Cebu and just pay the P5,000 fine as well?

What we are most worried about is when people’s trust in government gets eroded because of the double standard justice system- one for the poor and one for the affluent few. In this pandemic, we are sure that the next health protocol violator would demand the same month-long investigation before he would admit his violation.

In terse controversies like this, squid tactics are not uncommon. That is the reason why the issue of “politics” is injected into the discussion. The public knows Montero helped Yap’s rival Jun Evasco in Panglao- in which the latter won. Is “politics” pulled into the equation to negate widespread sentiments that the governor is indeed protecting Montero? Or is he?

Are there considerations, politics aside, that make the two seem to paddle one canoe in the same direction? It is hard to blame entirely the public for thinking this way.

QUESTIONS AND MORE QUESTIONS. Why does the Montero Report claim that the mayor tried four times to get the governor’s clearance for the Cebu travel-one letter of which was allegedly received by Capitol but which is now denied by the latter? Under the Local Government Code- any travel -personal or official – of any mayor has to be authorized by the governor.

Why did the Montero Report claim (contradicting the first paragraph) that all that was needed for the travel was a medical clearance which would make a PNP pass automatic?  The BIATF exposed the dates showing the PNP pass came ahead of the medical clearance.

Why did the Montero Report state that the mayor and the 16 others had themselves quarantined in a Panglao Resort (Amanzara)  from September 14-18 and from September 18-27  (Hennan Resort) when there is much documentation to show that during those days the mayor was up about in the island attending social functions.?  Likewise, sources said that the mere transfer from one resort to another during a 14-day quarantine period is already in violation since the subjects are expected to stay put in one place.

Why did the Montero Report not mention the names of the 16 companions -only lumping them as government- authorized personnel including the Coast Guard.? Who are they? What are their names and where did they get their SWAB tests? if ever?

What was so important about the  Cebu travel that protocol rules had to be violated? The Mayor says it was about the acquisition of a speedboat related to the opening of the island under the Bubble Scheme of the DOT. People know the Bubble to be a private sector activity- that is why some people are asking why the LGU would need a speedboat? The other reason for discussing in Cebu about the informal settlers in Balingcasag could easily be discussed virtually.

Has anyone seen an unequivocal letter from Dr. Anthony Damalerio chief of the Provincial Disaster and Risk Management Office saying that there was no clearance to travel for the mayor and company which can already be a basis of a clear violation under provincial ordinances? In any case, that letter would be superfluous since the mayor herself admitted she failed to get a Capitol travel clearance.

Why was the letter for allowance to travel addressed to the LGU (Panglao) and not the Governor’s Office directly who has the authority to grant travel permits? Deliberate or incompetence?

Now that the “Third” Report has been tossed by the BIATF to legal parties to resolve- the Boholano community continues its exasperating count of the calendar days way past 40 days until the final resolution of the case.

Even if the legal and medical BIATF members say there were protocol violations of the mayor- they could not even impose the P5,000 fee since the Clarito Report already exonerated her and closed the case. Quo vadis?

Has the bigger public interest not been compromised? For what gains? For whom?