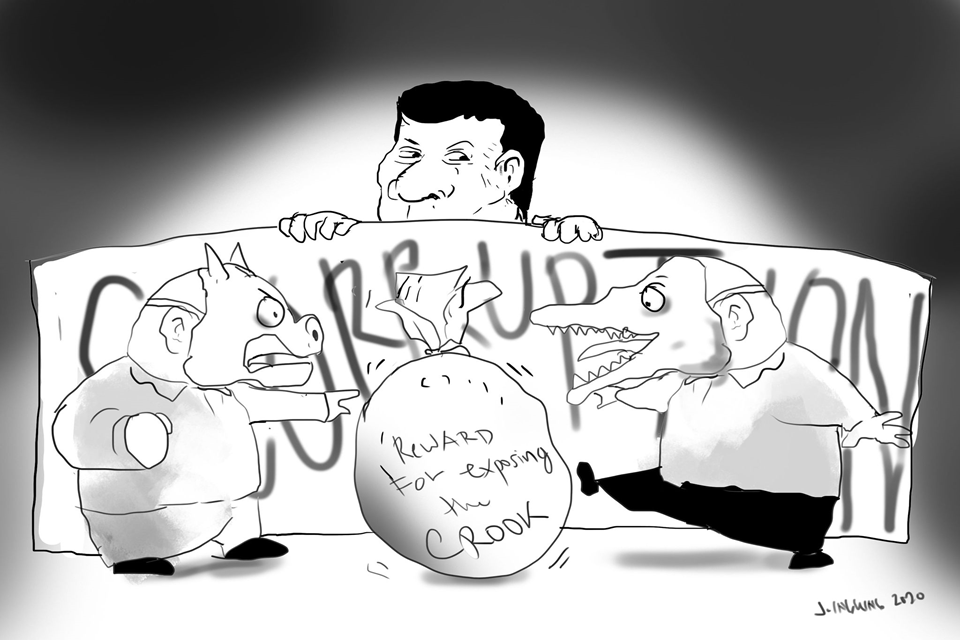 “Corruption is a Cancer: A Cancer that eats away at a citizen’s faith in democracy”. -US President-Elect Joe Biden

FEARING A LEGACY TAINTED by massive corruption, President Digong Duterte has declared an intense war versus corruption as the focus of the last two years of his presidency. Corruption has been cited as one of the main reasons why nations collapse in the book “Why Nations Fail”.

Duterte has asked the Task Force to be headed by the DOJ (Department of Justice) which has 20 times more prosecutors than the Ombudsman in cooperation with the Commission on Audit, the Sandiganbayan, the Civil Service Commission and the Ombudsman itself.

To show his seriousness, Digong promised anyone who can expose a crook successfully with P50 to P100 thousand pesos and “his name will remain with me until my grave.”

This presidential bravado probably rubbed on 15 contractors here-mostly allied with the SEC-registered (ABCCI) or the Association of Boholano Construction Companies, Inc. who signed a manifesto (read in this paper) condemning the  “buy-out” and ” standard operating procedure” (SOP) of kickbacks involving mostly DPWH projects in the province that has been going on for years.

They describe the “unholy alliance” as a collusion between the procuring entities, the Bids and Awards Committee (BAC) and public officials.

The “buy-out” scheme numbs contractors into submission in favor of a designated winning bidder in exchange for a 3% cut of the project without any sweat. On the other hand, in recent years, the “SOP” kickback in the province was reported by the hard-pressed complaining contractors at between 8-16% per project. The known 5%  commission is already an ancient relic of a distant past.

Worse, for the coming 2021 projects, some grease money has allegedly gone up to 18%. Where are the souls of these crooks?

They showed documents that 160 (mostly big-ticket projects) out of the 588 projects in the third district from 2015-2018 were cornered by a certain Muana Construction who did not respond to calls made by the Chronicle. This was during the incumbency of third district congressman Art Yap, now Bohol governor.

The contractors appeared brave enough to name names and point solid fingers if push comes to shove knowing that they will just be a phone call or text away to the president’s office if they face reprisals because of their expose. Their years of silence has also been deafening to the public who is greatly aware but cannot pin details on the conspiracy of crooks.

The ABCCI exposed the methods behind this madness of corruption: change order abuse, exclusion of qualified bidders, leaking of bid information, manipulation of bids, rigged specifications and unjustified sole source awards, among others.

The Big Stick and Broom of the Presidency had made large swaths against corruption recently as an exasperated president once recalled he wanted to quit his office because corruption had become “grabe” in his term and seemingly uncontrollable. But he is moving.

Senior and regional officials of Philhealth have been axed and will face prosecution. The DPWH has been singled out by Duterte as one of the most corrupt agencies in government- with the vultures waiting for the resumption of the “Build Build Build” program involving P1.3-Trillion in 2021.

Files upon files of officers at the Bureau of Customs have been regularly shipped out of their positions for failure to stop not just imported drugs but many others. Its other partner in the Citadel of Corruption (BIR) has been condemned recently by Philstar columnist Bobbit Avila as mercilessly attacking businessmen again even in the midst of the financially-draining pandemic.

About 44 officials of the Bureau of Immigration behind P40-B bribe money to facilitate entry of Chinese without background checks have been sacked and almost forced to eat money inside “pastillas” paper in front of the president. Senator Risa Hontiveros says her next investigation on the “external” corruption of trafficking people out of the country is even more horrible in size.

Hontiveros has also called for the review of the scandalous billion-peso deals in the Southeast Asian Games whose probe was swept under the rug as the games were on-going then. The Senate Blue Ribbon has the choice to pursue the senate probe.

Bono had once quoted that ” The biggest disease is Corruption. The vaccine is Transparency”.

In the case of Bohol, we are coming into a pre-election year (2021) and the provincial budget has been proposed to be doubled to up to plus P4-B and other projects funded through other national government agencies and bank borrowings.

It behooves everyone to be on their watchful toes – in the face of this gut-wrenching expose. Civil society, the church, media, the social media netizens, and every ordinary Joe de la Cruz who after having lost his job or livelihood and fearing for his life for Covid, could now all be aghast that the taxes they pay (whether VAT , income or whatever) will again be devoured by men who should be earning their respect, not disdain.

In the war versus corruption, every man and woman must be a warrior.

For God, country and people. Shalom.