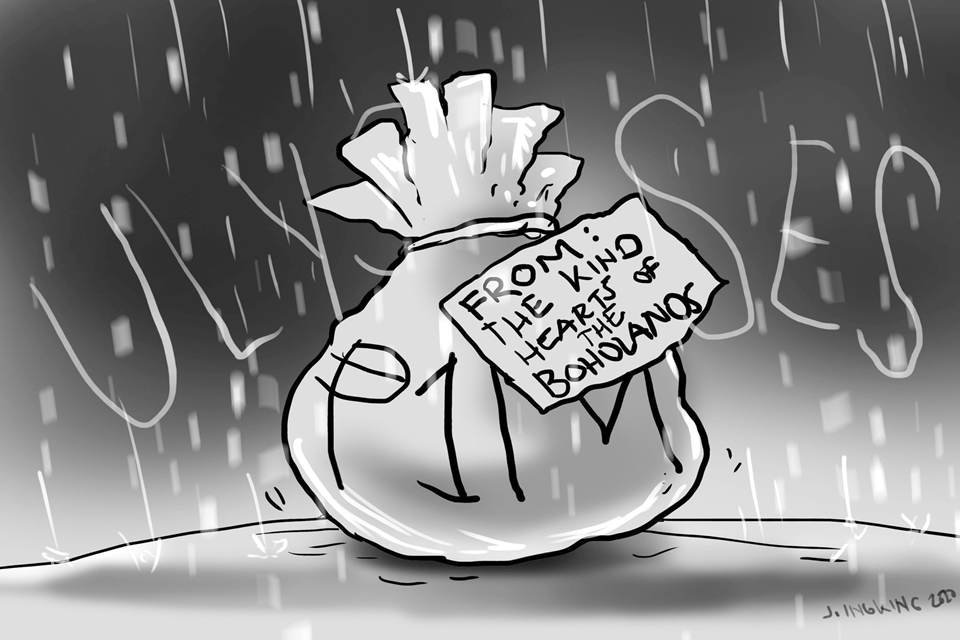 GOVERNMENT STATISTICS DISCLOSED, the Bohol economy lost P 10-Billion and counting. The year is not yet over- and financial losses are still piling. People might expect Boholanos to just run to their rooms, lick their wounds with pity and care less about the world.

What a pleasant surprise we are having.

For Boholanos again showed their seamless, heartfelt generosity. It was more touching as they expressed their kind-heartedness in a time when they themselves are not even in a better condition than the “normal” amidst the pandemic.

We ourselves thought twice if we will launch a fund drive for the typhoon victims of Luzon since we know everyone is affected in one way or another by Covid-19.  We questioned whether the timing was good. Many are jobless. And many more have fewer revenues in whatever businesses and services delivery they are presently being engaged with.

Overall, we had – at one moment- underestimated the capacity of Boholanos to love, to look beyond the four walls of their dwellings – with affection for people they do not even know from hundreds of miles away. They will not even have a chance to say “Thank you” to individual donors. Nonetheless.

Our hearts still beat with sometimes disbelief in the unprecedented gesture of charity for those who are much more in need. Of course, Boholanos needed the money and supplies, too. But the call of it is “always better to give than to receive” was a compelling force they willingly gave in to.

For five days, the “Tabang Luzon” generated P1.1 million from kind-hearted Boholanos.   What is touching to realize is that not only the corporate world of the Alturas Group, First Consolidated Bank and Bohol Quality Corp and others shared their blessings but even ordinary netizens who walked into our editorial offices and radio stations to donate even P200 from their hard-earned daily income.

We chose to give the donation to the flood victims in the poor island province of Virac Catanduanes and to the homeless people of Isabela province.

The spontaneous outpouring of help is something we are proud of as one  Boholano community. We want to share with you the immense gratitude of thanks from our beneficiaries, Bishop Manolo Delos Santos of the Diocese of Virac, Catanduanes, Bishop William Antonio of the Diocese of Ilagan, Isabela and Jane Jocson of DWMX (Catholic Media Network) in Santiago City, Isabela. They expressed profound gratitude on behalf of the hundreds of beneficiaries of their constituencies- stemming from the grace of sharing by our province mates.

On the other hand, we at the Bohol Chronicle Radio Corporation, humbly express our thanks for the years of trust and confidence in us whenever we initiate fund drives during the many disasters that had befallen the country through the years. It is almost an automatic reflex on our part whenever we see our countrymen suffer painfully somewhere.

The Luzon flooding likewise gave the Boholanos a lesson that we should continue with our efforts to love Mother Nature. The massive tree-planting campaign going on in the province is a laudable undertaking as well as our efforts to clean up our coastal areas.

With few dams operating in the province, let us do a more serious drill on how to release the water in times of heavy rains so it will not submerge the low lying towns as what happened when the huge NIA dam was opened to release its water to as much as an Olympic size swimming pool every hour.

Over and above these lessons, we thank the Almighty for this singular privilege to be of service to our country and people even before some help is asked directly from us. Shalom!

ANOTHER CORRUPTION MESS IN QUARRYING?

THE MASSIVE INFRASTRUCTURE BUDGET OF 2021-  of P1.3 Trillion has made quarrying a very promising industry in the Philippines. Quarrying and crushing produce limestone needed for cement manufacturing and sand and gravel often called aggregates needed in construction.

It is, therefore, an important cog in the supply chain for infrastructure.

We were apprised by certain  Bohol quarrying permittees -asking for government delivery receipts (DRs) crucial to legitimizing the transport of the limestone and aggregates –  that they were allegedly told by the PTO (Provincial Treasurers Office) that there were scant copies of the legal documents sought and instead asked them to call a certain “Ivan”. He was reportedly ” in charge” of the issuance of DRs.

“Ivan”, a live person who answered  ( but faded away) the cellphone call (by this paper’s Senior Reporter) – allegedly designated in charge of the DRs reportedly asked for P 50/ cu. m of the total volume of the permit. An obvious form of kickback.

This plus the additional fees charged under the new quarrying mining ordinance is, of course, burdensome, to the operators.

Provincial Administrator Atty Kathyrin Pioquinto, informed of the mess said: “This is a serious accusation” and vowed to investigate.

We suggest the investigation starts with the PTO officials ( they should not be hard to identify) who pointed to “Ivan” as the decision-maker in this kind of request. Further, they should disclose to the public who this “Ivan” is- is he not part of the government and therefore a mere “consultant” to Capitol for this specific economic activity.? So, why is he allegedly making these “tongpats” on the volume of the quarry? Was he acting on his own? And thus exonerate his principals, if there are?

It is not unlikely that by now- the mysterious “Ivan” will have changed his cell number and will disappear like a phantom in the night. If not, the government should answer the accusations hurled. Let us begin with  “why” the shortage of delivery receipts – shall we, therefore, stop all economic activities until we produce these forms?

Insinuations that the quarry operators made the expose as an expression of their resentment on the new higher fees charged for quarry output under a new ordinance does not hold water. That sign of pique will not – in any way-change a newly-minted ordinance by any stretch of the imagination.

So, let us just take the bull by the horns and settle this accused mode of graft.

The Mega Task Force assigned by President Duterte to curtail the scandalous proportion of corruption in the country reportedly got hold of copies through social media of the expose done by the local DPWH contractors and published last Sunday in this hard and online versions of the Chronicle and perhaps those of our sister stations who carry similar news articles and editorials.

Will this Quarry Mess be added to the smoldering cauldron of corruption as shared by the other Boholano whistleblowers through the media? It is a “serious accusation, indeed”.