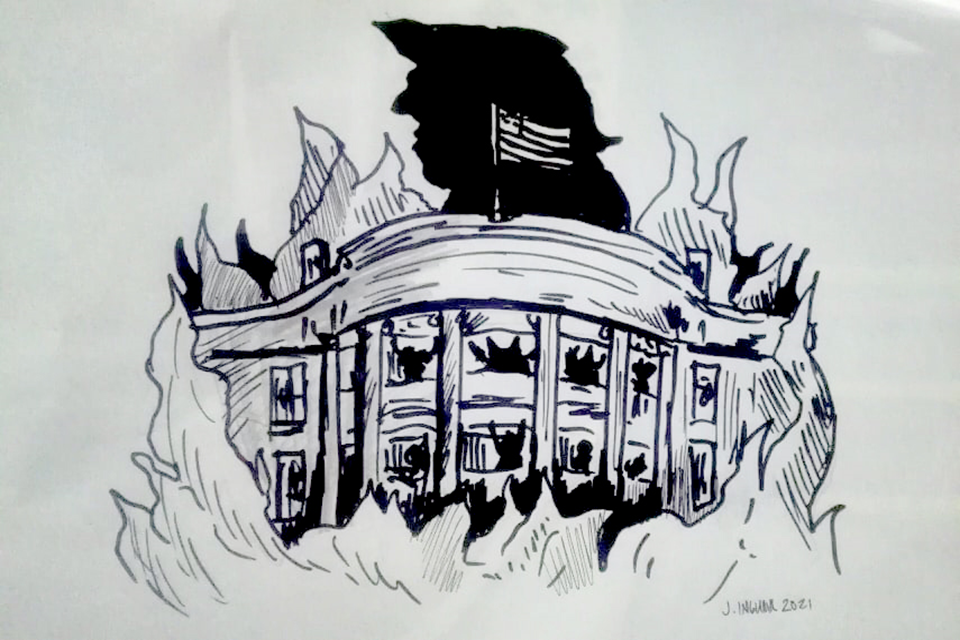 This was the Bombing of Pearl Harbor when hundreds of Japanese Kamikaze  airplanes dropped all the bombs and bullets on sleeping Americans in Hawaii -soldiers and civilians.

January 6, 2021, on the other hand, marked the second “Day of Infamy” for the greatest nation on earth.

This was when a gang of hoodlums and some decent-looking men- incited by the incendiary language of a sitting president –  who answers to the name of Mr. Donald Trump-attacked Congress which was to count the Electoral College votes of the November presidential polls.

Mind you, the avid listeners here of “Inyong Alagad” of dyRD were beginning to entertain thoughts whether somewhere in Trump’s genealogy was inserted a pint of a Filipino politician’s blood in him which disables his faculties to accept defeat.

Mind you, this was not an “upset victory”. Officially. Democrat Joe Biden walloped Trump by over 7 million votes (81.3 million vs Trump’s 74 million) and an even higher statistical majority of 306-232 in the Electoral College. Trump was hallucinating about massive electoral fraud in the greatest democracy in the globe- with no iota of evidence.

It was Biden with a  clear victory -like another actor’s victory here in 1998- that when Joseph Estrada bamboozled every candidate from the electoral map in his “landscape” victory.

Funnymen were already posting memes of Erap advising his fellow (reality) actor Trump saying-” Pareng Donald, mag-conceive ka na”. These days, Trump will be the only losing American presidential candidate who  conceded too late to the clear winner.

Trump also vowed never to attend Biden’s induction into office- about the only thing he and Joe Biden seem to be in agreement about. Facebook has disabled him and Twitter permanently banned Trump from his 80 million followers.

This is the yellow-haired Katzenjammer kid who is tearing his hair apart just because another boy would not give the lollipop he legitimately bought at the canteen. What Donald wants- he wants to get.

Of course, Boholano listeners were in utter shock at what they saw on live television CNN and all global networks. What they thought could happen only in countries ruled by fascists was happening on primetime TV in the world’s most celebrated democracy.Pastilan!

Providing the legal, on the spot coverage for us was Boholano Atty Christine Tungolh- Cabagnot in Washington D.C who provided a “ringside view” of a Boholano perspective of an American political crime.

Sensing that his own violent version of the “EDSA” revolt over “fraudulent polls” did not spring popular support – not in Washington D.C. or anywhere else, Trump told his cowboys and Indians to go home and condemned the violence – which resulted in 5 deaths- to perhaps escape personal culpability for “inciting insurrection”.

As one of his relatives wrote in a recent book, the narcissistic Trump is so deathly afraid of the loss of the presidency because it is the adulation and attention given to the most powerful man on earth that he will miss the most and, like crazy.

Born, raised and bathing in his billions, Trump had gotten to where he is now without spending one day in government before the White House- neither as elected or appointed official. He is used to brinkmanship- escaping like Houdini with all of his  legal Ali Shuffle and using the full limits of the power of the Almighty Dollar to protect his interests over the decades,

Trump seemed very good at picking fights- with the powerful and helpless (multilateral institutions and orphans) and we doubt if he had read one page of Dale Carnegie’s all-time popular book at public relations called ” How to Win Friends and Influence People”. To him, everything appeared “transactional” and the end always justified the means.

On January 20, Donald Trump will be political history and a sad footnote in the art of misgovernance and turning off people. But, at the very least, the danger of having nuclear weapons at the fingertips of one powerful man with a strange temperament will now come to a dolorous end.

Speaker Nancy Pelosi says if Trump does not resign over his recent illegal acts, the current House will impeach him next week- rewarding him with an unprecedented ignominy of being the ONLY American president to be impeached twice.

Of course, his strong point was the American economy- that is why despite all his anti-hero gestures, 75 million Americans still voted for him.

There are those who believe that if Mr. Covid 19 had stayed in the caves ( okay, in the labs, Watson), Donald had more than a (pardon this most insulting pun) Chinaman’s chance of getting reelected. Because the economy would have blossomed like tulips in Holland.

But such are men and mice fated- there are bright and dark stars in their firmaments called Destiny.

Thus, Frank Sinatra can croon, and “now the end is near”. And the Fat Lady is about to sing her farewell solo.

Many will miss this flamboyant man with long golden hair that doesn’t’ seem to go with the wind. A best -dressed president who always wore white shirts and ties that matched his coat and always an inch below his belt on slightly high-waisted trousers.

He always looked like he just stepped out of a fashion magazine like GQ. While others -no matter how they try- would always look like GQ ( Galing Quiapo).

In his younger days, Donald looked good enough to be a movie star. On good days, he can be compared to another Republican president (actor) Ronald Reagan. Except that Trump’s words are way always combative and profane while Reagan was Mr. Communicator- suave and compassionate.

Whereas, Ronald would weep and embrace a man and hold his hand after losing a relative – in war or in peace; Donald seemed oblivious even to separating children from their immigrant parents.

In the end, cosmetics and proper haberdashery will only take one so far.

Some day- and that one day has come- people will find out that their Emperor really had no clothes, after all. And that Servanthood can never be replaced by -and, especially, not – by imperial behavior.

The 81.3 million Americans who voted Trump out from office will remember the virtues of decency and integrity. Because they are the two things Donald never had.