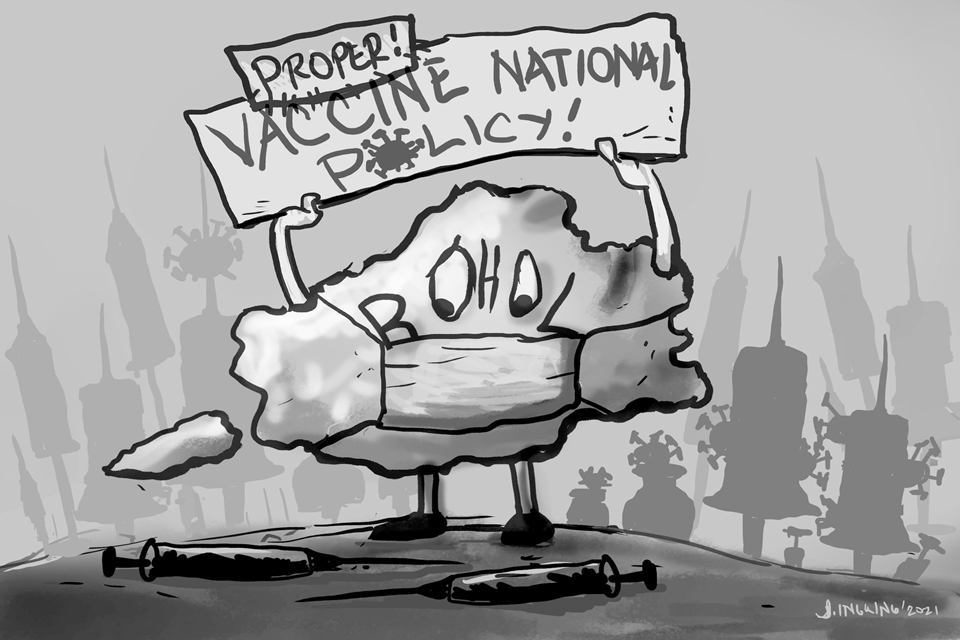 IT IS FUNNY IF IT WERE NOT SAD,  that Filipinos still debate to death policies on the Covid-19 vaccination while other nations have already inoculated millions of their citizens.

Sometimes, we talk too much, do too little. Long after the cockfight ended, the Filipino elders still debate with gusto why the red cock was killed by the white rooster. As if winning the debate will bring the dead cock  back to life.

With the Provincial and city governments allocating P100 M and P 10M, respectively, for the vaccine purchase and the Bohol herd immunity number tagged at about 7o2,000 Boholanos to be vaccinated, it is obvious that if one does the mathematics side of it, the national government, LGUs and the private sector will have to get involved together. As two doses are required per person.

But even if the funding is multi-sourced, it will be more orderly that only one entity- IATF- if we decide, to say who will be injected first, in terms of vulnerability, importance to the running of the state and to foster as credible samples as vaccine-getters so as to destroy the attitude of a high 76% of Boholanos who maintain reservations over the whole exercise.

How about locational direction- with limited transportation across 7,000 islands- how will the dissemination be – from the cities to the towns – from urban areas to the edges of Aparri and Jolo? Who will decide specifically?’

Some P82-B is expected to be spent for the vaccine this year. Since most are accessible from loans and agreements have been signed with some manufacturers- believers in the “time and motion” studies should insist government present the timeline for the implementation.

That should include logistics on transportation and storage- even if stated in sentence outlines as to cohere a plan on paper like a project study.

We are a democracy – and therefore, whether one takes a vaccine or not should be a matter of choice. Would choosing the type of vaccine used also be a  matter of personal choice as well since the vaccines are funded by loans which will eventually be paid, anyhow, by people’s money through various forms of taxation?

Would a Filipino who signs a waiver not to be vaccinated – be given equal treatment in hospitals if and when he contracts the disease without being booed in his face and be reminded ” We told you so, Hard Head”?

That it is not simply a matter of protecting oneself from the possible side effects of the vaccines as it is an issue of patriotic “Otherness”- asking as to how many will I eventually infect of my countrymen if I get the disease because of my refusal to be inoculated?

We need to have “role models” in society to be in the front line of the vaccination queue and say I am risking my life so we can continue to be of service to you.

In this category we figure would be medical front liners, the military, leaders in the three branches of government, priests and pastors, teachers and civic leaders. Men who people look up to (generally speaking, of course)- and assimilate courage from them instead of fear.

Think of That Man from Nazareth who was certain He was going to get beaten, crucified, and die on the Cross but went ahead, anyway, for a Cause larger than His own Life.

Large corporations who have the money to purchase the vaccines have the right to choose who the vaccines will go first, of course. But what about LGUs- are they not to fall in line with the IATF national directives just because they funded the purchase “themselves”?

How much liberality can Government tolerate without converting the nation into hundreds of noisy, unintelligible Towers of Babel-  Islanders speaking in different tongues, not necessarily emanating from the venerable Holy Spirit?

Our fellow countrymen, this is a crisis situation that calls for the highest values there is in the human soul. We have seen the pandemic shrink the Bohol economy by P10-Billion and reversed the once claimed 9% Bohol GDP growth into suffering smithereens.

Let us urge our national and local leaders to act now. And not do for tomorrow what can already be done today.

Procrastination is an evil that can make people be late even for their own funerals.

Let leaders define immediately the Rules of Engagement in this war against Covid-19.

Then let everyone toe the line. Those who will not, cannot, just do not stand on the way of the Believers in this continuing crusade for national survival.

The Philippines targets 70M Filipinos or 140 doses to come close to the mathematical herd immunity number.

So far, we have contracted (25m) from Sinovac, Astra-Zeneca (13m), Gamaleya -Russia (20m), Moderna (20m) or a total of 78 million dosages. Pfizer has promised to allot millions to the Philippines.

Of course, the larger scientific questions remain: how long will the vaccines guarantee protection ( years? Forever?)  even against possible mutations of Covid-19?

Even if they are valid posers, they do not represent a wall to prevent our policymakers to act now on what we have.  Analysis- Paralysis is a bad pastime to have these days.