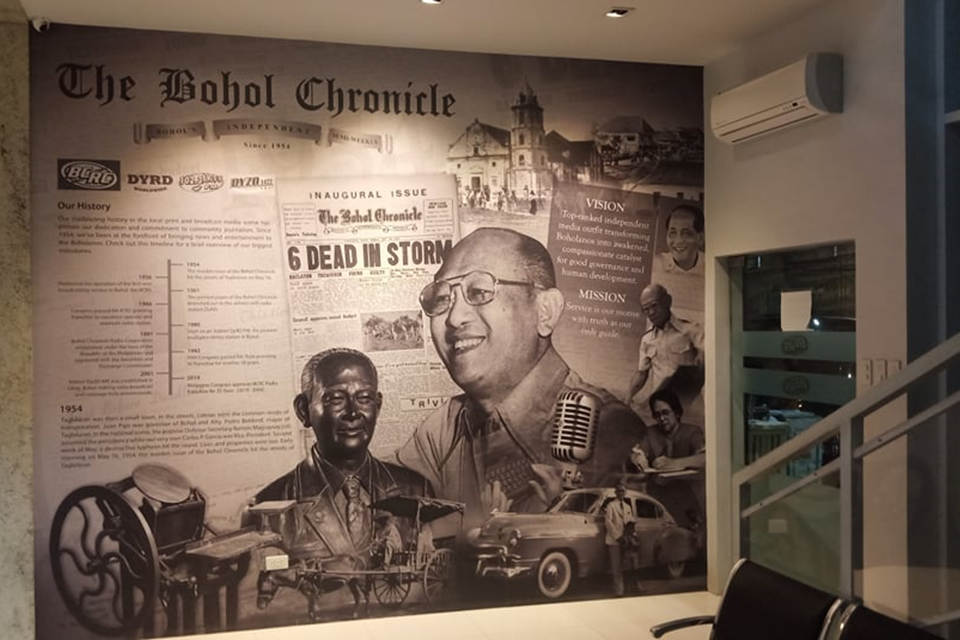 Today, February 11 is the 100 th birthday of Atty. Zoilo Dejaresco, Jr., founding editor-publisher of the Bohol Chronicle, who is considered as Bohol’s media icon for his great contribution in journalism. He died in June 2002 at the age of 81.

A lawyer by profession, Dejaresco chose to be a journalist and founded Bohol Chronicle on May 16, 1954.

Seven years later, he branched out to the airlanes after he opened radio station DYRD in October  1961 which was soon to become Bohol’s trusted news and public affairs radio station until this time as the station turns 60 this October. He also pioneered FM radio in Bohol with 102.3FM and the first out of the city radio station with DYZD-AM in Ubay town,

It is part of Bohol’s history that Jun Dejaresco, bruited as the “Father of Bohol Journalism” , was a one-man show: writer-editor- proof reader- advertising agent-collector at the start.  No, he was not even a journalism graduate. He was a lawyer- who knew his English like his body and had this passion to chronicle the life and times of Boholanos.

No, he was not even a Boholano. Born in Negros Oriental but Boholano by choice. Part of that big choice was to meet, court and then marry the love of his life from Bohol- the demure, piano stroking  lass Charing Pernia on New Year’s Day in 1949. He decided to live and die in Bohol -with his boots on, so to speak.

There is that over-used story about a certain well-meaning priest who proclaimed  (not ex cathedral, of course) that either the paper or Dejaresco will die , one after the other. The Chronicle due to lack of business and Dejaresco from sheer fatigue and disappointment.

Jun Dejaresco  lived up  to the ripe age of 80’s while the poor priest had long been buried six feet on the ground.

And so the Chronicle went on to live another day- and another -yet another till the months turned into years, years to decades.

For 66 years now, the Chronicle missed only one Sunday  issue right after the declaration of Martial Law. Amid storms,earthquakes, political repression and financial challenges- it sailed through unflinching -with eyes focused to  our goals.

Public service is a public trust. Service ,not profit, is our main motivef of the founding editor.

The Chronicle’s late founder who solely started the weekly in 1954, was the third chairman
of the Philippine Press Institute (PPI) succeeding Joaquin “Chino” Roces, founder of the Associated Broadcasting
Company and the Manila Times while its first chairman was Carlos P. Romulo.

As a civic leader, he served once as president of the Philippine Lions while serving as District Gov 301-B governor of the Lions International based in Bohol. He likewise served as the first commander of the Phil. Coast Guard Auxloiary in Bohol and chairman of the Chocolate Hills Development Council which carved the highway leading to the now popular veiwing deck of the Chocolate Hills in Carmen town.

As part of his apostolate as lay, he , together with the late banker Alfonso Uy of the First Consolidated Bank spearheaded the construction of the Divine Mercy Chapel in Dampas, Tagbilaran City which will soon become the diocesan Divine Mercy shrine in the province of Bohol.

Now having its daily online news  through www.boholchronicle.com.ph,  the paper holds the distinction of having been awarded as the country’s most  outstanding community paper by the Rotary Club of Manila in 1970, aside from the other awards.

In 2015, the paper won the “Best in Arts, Culture and History Reporting” among all of the country’s weekly newspapers.

“The Bohol Chronicle is a newspaper that shows professionalism, uniqueness, and in-depth reporting of culture,
arts and history in the community,” said PPI in its award given to outstanding community newspapers in the entire country. “This newspaper goes beyond providing news or information and also inspires readers to get involved, get
engaged for the development and preservation of culture and arts.”

This followed the Chronicle’s winning the 2012 “Best Editorial Page” and the 2013″Best in Disaster
Reporting”.  There were only eight newspapers nationwide that won the awards last year for both the daily and weekly categories with the Chronicle, the only winner from the Visayas in the Weeklies Category.

In 2016, Bohol’s first newspaper bested other community weeklies from across the archipelago in that award segment. It topped The Ilocos Time and Business Weekly Mindanao, finalists from their respective regions.

Now on its 19th year, the annual awards are given” to raise the standards of journalism in the countryside, seek
to honor news organizations not only for editorial excellence but also for their role as catalysts for community development”, according to the PPI.

The Bohol Chronicle was also a finalist in two other categories, including Best in Business and Economic Reporting and Best in Environmental Reporting.

In 2016, The Bohol Chronicle and the Mindanao Cross had the most nominations at three in the weekly category.

The 16 finalists from Luzon, Visayas, and Mindanao were handed plaques of merit while the victors were given trophies and cash prizes.

PPI’s Civic Journalism Awards is now on its 19th year. However, it used to only give awards to regional newspapers when it started in 1997.