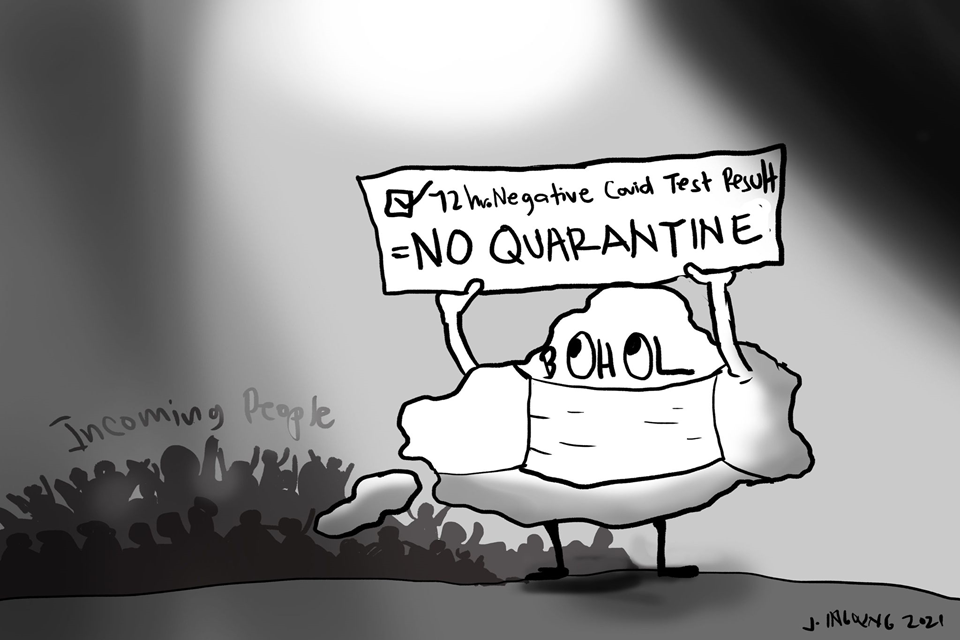 THE FACT IS THAT for close to a year now, Covid-19 has claimed only over 11,000 lives in the entire archipelago of 106 million Filipinos.  Many more diseases have claimed 5-10 times more lives than Covid-19. That is a fact.

The Philippine economy is in a post World War II status- dropping by 9.5% in GDP- a degree that was not even seen in the worst of the Martial Law years. The economy had lost trillions and Bohol -the last time it was counted when 2020 was not even over- was already P 10-B.

No amount of ayuda of P8,000 per family and sacks of rice can ameliorate that. Now, the government is relatively low in funds- it had to borrow over $1.2-Billion from multilateral institutions just to buy the vaccines.  That is a fact.

They know that the issue of poverty and hunger can backfire against the government and becomes a socio-political issue as the day of reckoning in May 2022 approaches (as in the elections).

Now the Covid Management team -made of generals, medics and bureaucrats -at the national level – is finally listening to the economists and finance men they have ignored for too long.

When Secretary Sonny Domingo, who closed his own Marco Polo hotel in Davao City, told them point-blank two weeks ago that the economy was losing P2-4 billion a day in this over-acting lockdown, they were wetting in their pants.

To continue the biological metaphor, the shit had hit the fan. And this is when the government finally was poised to declare the entire nation under the most liberal type of lockdown: the MGCQ. The truth is we the nation cannot afford to shoot itself on the foot much longer.

On cue, the Bohol LGU made its own adjustments to this gripping reality Thus. The Bohol IATF issued Executive Order (No 12)  which finally relaxes the health protocol.

Starting March 1, Gov. Art Yap signed the new EO mandating that there will be no more quarantine for incoming Boholanos and visitors as long as they are bringing with them (from the port of origin) a 72-hour negative PCR test result.

Other indications of a more relaxed protocol are the following new policies: Upon arrival, one can go straight to his destination while the receiving LGUs are still requested to monitor their arrivals. However, if an arriving passenger gets in without a PCR test, testing is done upon arrival, arriving returning residents shall be placed under quarantine until the release of the negative results.

Aside from the expensive PCR Test, Bohol IATF will now accept Rapid Antigen Test (RAT), but it should be 24-48 hours prior to the confirmed flight, The validity of the RAT test shall be for five days. If they stay beyond 5 days, they shall undergo another RAT and should yield a negative result.

The 14-day quarantine will be imposed only if the inbound travelers will develop symptoms anytime during his/her stay in the province. Dr. Jefferson Ong, President of the Bohol Medical Society (in the front page of this paper) had itemized the defensive medical strategies to meet this new enlightened liberalization of the economy.

But overall, nationally, we have been known to be a country of slowpokes. We had the longest lockdown in Southeast Asia but had the highest number of cases. We were one of the worst-hit economically and tagged to be slower in economic recovery than the rest.

What we lack is a sense of urgency all the time – the lack of “Virtuous Impatience” which is the title of the book written by resigned NEDA boss Ernie Pernia. We are just fond of debates and power play to show who has the biggest muscle and control to the detriment of society at large.

Now that the policy-makers have seen the light at the end of the tunnel- we hope they will not covert it into one coming from an oncoming train zooming at 1,000 kilometers per hour. Let us not convert a tragedy into a disaster.

MARKET OR SHOWROOM? LAWYER OF LAWBREAKER?

THE PROVINCIAL GOVERNMENT LANDED on the limelight (again) when its city project of constructing a “Bagsakan Center” was stopped by the City Government due to the absence of a building permit. City Hall stood firm on its jurisdiction over building  any structure within the city by ordering the stoppage of the project which is situated at the Carlos P. Garcia (CPG) Park along the busy street of the national highway of CPG Avenue, right in front of the Bohol Wisdom School.

Mayor Baba Yap confirmed the issuance of the stoppage order. The mayor should insist on his power as the city’s top executive to impose the law. There are zoning imperatives and no one is above the law- not even the governor of this province.

The concept of providing a selling area for farmers’ products is clear and well appreciated by the public. But, the place where it will be is the point that is being questioned. Since the application indicated the place as a “Bagsakan Center”,  City Hall is vehemently against the project as it requires several documents prior to the approval of constructing a market as what a “Bagsakan Center” truly is.

The construction of a market needs a zoning certificate from the House and Land Use Regulatory Board (HLURB) and a sanitary permit from the local health authority on where the market will be constructed.  Upon the issuance of the stoppage order, the spokesmen of Gov. Art Yap, led by his Prov’l Agricultrist Larry Pamugas were so quick to divert the project calling it a “showroom” while the propagandists under the Capitol called PRIMER said it is a “Farmer’s Market.”

We do not see a need to “showcase”  in a showroom what a dressed chicken, cut pork, chopped beef, what fish and crustaceans look like. Perhaps it is good to cut the BS and call it a “market” when it sells goods. Because if it was really just a mere “showroom” how will that help the farmers and fisherfolk?

Gov. Yap who is proud of his so-called claimed agriculture-expertise (as GMA’s agriculture secretary) came out with his statement that he will pursue the project at the CPG Park saying that with all good intentions, the project is for the benefit of the farmers. In his nine years as congressman of the third district, how did Bohol agriculture actually benefit from this expertise?

Yap had openly criticized that the over-emphasis on Tourism had made Agriculture the neglected cousin in Bohol’s development. Could he not be part of the Official Neglect?

He even challenged any well-meaning Boholano to argue with this project of providing a market for the farmerts’ produced.  Sorry, Mr. Governor but you are singing the wrong tune.      Nobody is against the project of a “Farmers Market” for the farmers to sell their products. What is being questioned by the public and the city government is the location where you are insisting to put up your desired market right within CPG Park in a place where there is already an existing drainage problem and a heavy flow of traffic.

So much has been said . But whoever is the contractor of this market started to work despite not even securing a Building Permit does not auger well for a government “of, for and by” the people. How much more favor should it get? It would seem like a government is ruled by kings and their courts, not the rule of law.

Secondly, the Capitol said this is only temporary once completed. A humongous P8 million cost of a project is just being used for a “temporary” structure? What a waste of money.

Public clamor calls for the relocation of the Market project (be it a Bagsakan Center, Farmer’s Market or a Showroom) since that area is one of the heavily flooded areas in the city, aside from the heavy traffic especially when face-to-face classes will eventually resume. Not to mention the inconvenience to almost 1,000 Capitol workers nearby who will pass the same highway.

What is surprising is that while Captiol wants a market to be constructed there, it has budgeted another P10 million for the beautification of the CPG Park where the market will be constructed. We may have missed some units in college for culture and art, perhaps?

The governor’s apologists are quick to point to “politicians and their conspirators” whenever Capitol is being criticized. Look hard in the mirror,  ladies, and gents, is there anything political in this issue?