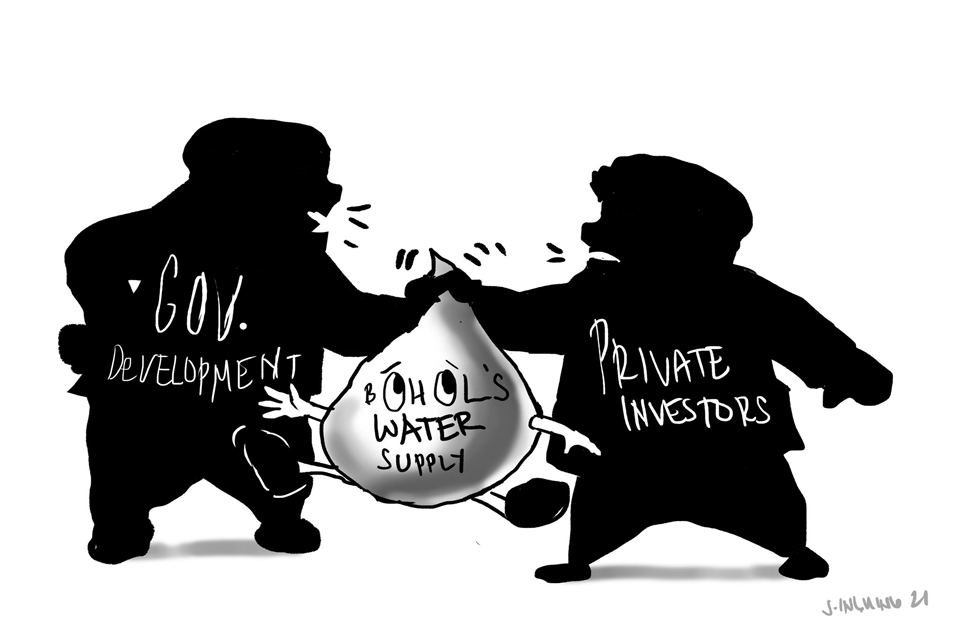 WATER MUST BE GOLD, the way the public and private sectors have suddenly shown interest in H2O here in Bohol. Of course, water is life. Without water, no man, animal, or plant will survive its absence for a few days.

For decades no entrepreneur or government pursued in a big way water development here. This in spite of the fact that NAPC ( National Anti Poverty Commission) -annually- cited sitios in Bohol deemed “waterless” for decades. By definition- “waterless” means more than half of that community does not have access to safe and clean water.

Moguls and taipans surely talked about Bohol Water Development but none sank a single centavo into such big ventures. It was only a local businessman Richard Lim and his Richli Corporation that dared invest and borrow over a billion (P1.2B from DBP) to start a water project from a surface water river source in Cortes.

Richli now serves parts of Tagbilaran city, Dauis, Panglao, parts of Baclayon and Corella. The cost is rising due to the pandemic curse but Lim says they are looking at expanding in Cortes and Albur (if needed) plus a wastewater project in Panglao all costing another P500-Million.

We were surprised to find out that the Provincial Government is currently protesting with the National Water Resources Board over certain of Richli’s water operations. BWUI (Bohol Waterworks Inc) claims to be an aggrieved party in Richli’s water forays and is owned 30% by the government; 70%  reportedly by a businessman not from Bohol.

For the interest of Bohol’s development,  for us, quarters should not quarrel over water areas that are served well already and look to give H2O to other waterless communities. Are they?

The provincial government will shortly avail of P1-B of the P2-B Omnibus Credit line granted by the Landbank for the “water projects of the government”. It will have a grace period of 3 years and 15 years to pay by the government from taxpayers’ money (after 3 years).

According to the terms, it will be a “supervised” credit wherein Landbank will only release on the basis of the progress of the water project. This means the LGU must advance the wherewithal first (guaranteed by the assignment of its IRA allocation from the national government) before they can draw on the loan.

It could be a daunting task for the LGUs. This probably explains why only four towns apparently approved the LGU-PGB-LB deal (according to BM Lucille Lagunay who voted no to the  SB resolution):  Sierra Bullones, Duero, Valencia and lately, Pilar. Reports have it that those who said “no” to the proposal are: the towns of Buenavista, Ubay, Bien Unido and Talibon.

Those whose SB’s are currently reviewing the deal are Trinidad, Mabini, Alicia, Garcia-Hernadez, Sierra Bullones, Guindulman and Carmen. How will they vote?

Aside from the stiff cash flow pressure of a “supervised” credit, water sourcing and “gestation period” before a water project can take off add burden to the project feasibility.

When Richly Corporation launched its water project, the witnesses were educated that  bringing “quality” water to one’s house and business involves five processes (which Richli does):

Most deep wells that are existing legally and illegally in the province only do one step: chlorination which makes water available but is it safe and clean? If not, then providing such water does not upgrade the “waterless” status of the communities on the basis of lack of safety.

We are for “Water for Bohol” for sure. But let’s make haste slowly and make sure we understand the business fully. Most of all, development projects should be stripped off politicization and enhancement of self-serving vested interests.

BEING A ‘DRAGON OR IRON” Lady seems to be an image that Panglao Mayor Nila Montero wants to live up to. Or is she just born stubborn and could not care less as this is her last term as mayor and is throwing caution to the wind?

But when such bull-headedness translates into “health protocol violations” that affect the leading tourist island in Bohol, several sectors in the province get annoyed. Let us count the ways.

Going viral-hot on social media, people were shocked to see a so-called foam party brandishing “no mask, no social distancing” decorum while an apparently “drunk” lady guest bared her breasts and romped the ramp oblivious like a Lady Godiva in Amansara Resort the other weekend, reportedly.

Warned by Capitol not to repeat the granting of the same permit to the resort violator and by the Regional DOT  that the resort is non-DOT-accredited and therefore cannot do such promotional events amid the pandemic, the event apparently happened again last Friday. Montero instead defended Amansara as doing its “share in reviving tourism” and defied Governor Art Yap and was told to take a walk because Panglao is her turf.

This was Strike Two for during a Halloween Party in the same resort, footages showing health protocol violations- punctuated by a smiling, conniving mayor also surfaced- followed by public indignation.  No action done- thus, the bravado?

Montero may have also seen some weak chinks in the armor of Governor Yap when before these- she and a bunch of allies went freely to Cebu and back breaching all health procedures. In fact, the highest officials of the province, Gov. Yap, VG Rene Relampagos and Rep. Edgar Chatto self-quarantined themselves after she socialized with them in a function upon her unauthorized trip.

Public opinion hammered Montero from wall to wall for practicing double standard: a set of rules for the privileged and rich and another for the ordinary folks. The governor, instead of acting with dispatch on the basis of his supervisory powers over town LGUs (under the Local Government Code) hesitated to do anything for a good two months.

Before the dam’s wall would break, finally, administrative and criminal charges were filed against Montero. But this was a trifle too late and the damage was done. Probably, the mayor thought she could get away with murder, not literally now. Thus, the chain of events, thereafter.

The Provincial Attorney’s Office is again studying what legal sanctions the new defiance would merit. Another foot-dragging here would mean a real lack of political will somewhere.

This would not augur well for the rest- as any other mayor might assume he/she can take liberty on their hands if Mayor Montero can. What is sauce for the goose must be sauce for the gander.

With the Law and Public Opinion behind him, we suggest people in authority act with dispatch. In defense of Amansara, Mayor was not defending tourism, but endangering its full blooming by risking public health and the greater good.