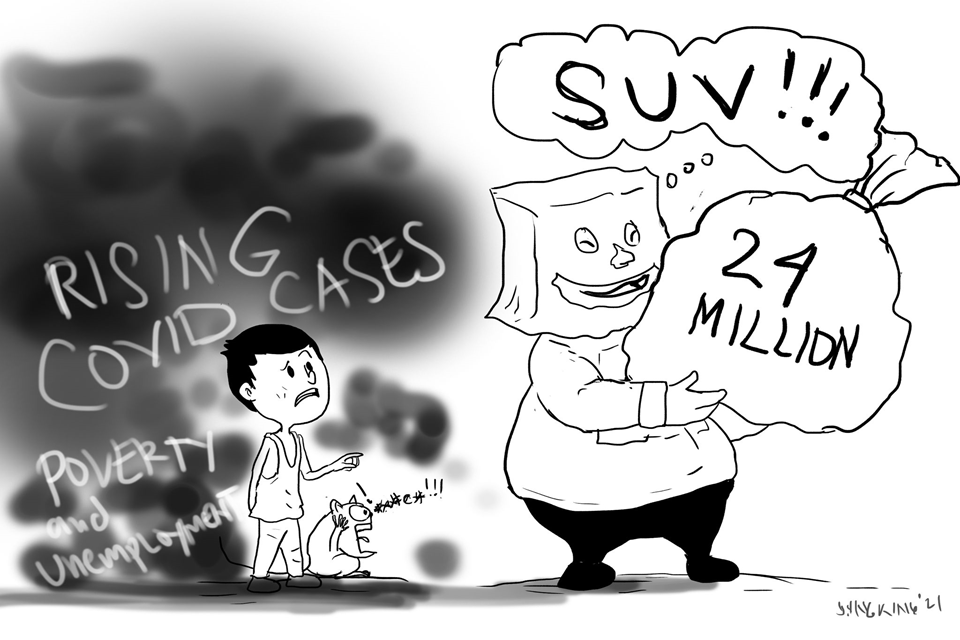 “TO BUY OR NOT TO BUY”- that is actually NOT the question.

This refers to the recent controversy on the proposed purchase of SUVs or Pick-Up vehicles for the Vice Governor and the members of the SP worth P24-Million for 14 vehicles.

“Timing is everything.” Without sounding facetious on such a serious issue, even our Fighting Senator Manny Pacman believes so when using his lethal left-hand hook. Maybe one can ponder on the wisdom of that phrase.

We think the Boholano general public can be convinced about the need to replace those decrepit (fully depreciated-accounting-wise) vehicles for their use in the line of duty.

Every year that passes, everyone who owns a vehicle knows- that the cost of repair goes higher, the older the vehicle becomes.

It can be argued further that many of the SP members are based out of town and are expected to visit their constituents to hear their concerns, needing, therefore, able vehicles.

Those arguments will, however, fall on deaf ears if the ones concerned are people who have lost their jobs and livelihood- with a future uncertain amid the ferocity and unpredictability of this raging medical challenge. It will pain them if they are not clear where their next meals are coming from or whether the family will now eat twice instead of thrice a day- and then see these fancy vehicles whizz past them- and they are left inhaling the fumes from the exhaust. Insult to injury.

We feel this because when there was no pandemic in 2019 – there was just little objection from the public when this was initially approved. So, it’s timing folks.

Maybe, if this was budgeted again for 2022 when things will hopefully be better by year-end 2021, perhaps the resentment might not be there anymore.

And please, kindly refrain from arguing that just because the government provided P800M in 2020 and P1.2 Billion (2021) in Covid response budget- it is a license to buy those cars now. The Covid 19 funding came from the people’s taxes coursed through the national or provincial budgets. Those two expenses are not mutually exclusive.

Or it should not be: that if you have one, then you must also have the other.

Furthermore, Capitol should not be so onion-skinned when people criticize because for all one knows, some of them voted these very same officials into power. Even if they did not, they have a right to question any expense which at the end of the day will be paid for by the people’s taxes or borrowings to be paid by the same.

We must be reminded, in case we may sometimes forget, however, that we are still a democracy that enshrines the citizens’ right to free expression and seek redress of grievances. To say that every criticism of Capitol stems from political motives is to insult the ordinary citizen’s capacity to think freely.

Or it might necessarily create in the minds of many people how grossly the political paranoia has grown in Capitol -long before the deadline of the filing of candidacy occurs. Of always thinking that anyone who shows a long face at Capitol already has partisan motives.

Besides, it would be best to remind all public officials (not just Capitol) that when they were campaigning, they swore on their elders’ graves (pardon the exaggeration) that they will have all ears for “Haring Lungsod” as to their concerns. Why be pissed now?

The people need a “listening” Capitol, not an overly combative one. And it will not be helped if the chief executive, Governor Art Yap, once again washes his hands like Pontius Pilate and says the SP, being the Legislature is free from Executive control and has the ‘power of the purse”.  But it was the governor who requested the DILG to grant the approval for the SP purchase- so is he or is he not objecting to a P24-M usage of funds under his stewardship being the Governor?

In the end, we in media are oftentimes just the messenger of the wishes of people. If we agree with the people’s concerns we will say so, if not, we will still say so -being the bridge between the governed and the governors.

In this issue, we say we agree there is a need to replace those rickety vehicles. But then, again, perhaps that government must keep the word “sensitivity” close to our hearts especially in these most trying times when almost everyone is crying sighs of utmost desperation.

One should, therefore, err on the side of compassion. Enough said.

DEPARTMENT OF TRANSPORTATION Secretary Arthur Tugade is just what the doctor ordered in order to address the country’s infrastructure weakness – particularly in the area of transportation. Our lack of infrastructure , as we know has been one of those singled out to be behind the anemic economic rise of the Philippines over our ASEAN neighbors.

Tugade is a blessing. Not only is he a self-made billionaire and may not be as inclined to think about “funny” deals (kickbacks) on projects just to inflate his bank accounts. Or is not your traditional bureaucrat who makes a livelihood out of one’s public office.

Nor is he a man – all talk and plans- but is dubbed the “action man”.

This combination of personal facets partly explain why the Bohol International Airport finally took off the ground (no pun intended) -over a 220 hectare Panglao property. It is capable of servicing 2 million visitors per year, has pro-environment features and ranks among the 10 largest airports in the country.

What is does to Bohol Tourism cannot be overstated considering that back in 2019, some 600,000 Bohol visitors stayed in Panglao where the airport is located.

This week, the DOTr and the Philippine Ports Authority formally opened the second terminal of the main sea entry to Bohol- the Tagbilaran port- part of the P2.3B budget for port development here. This will raise the passenger holding capacity from 497 to 1,110 passengers. Then, there is the Maribojoc port, 95% finished, which will be the alternative “cargo port” to the city port.

Both were partially damaged by the nasty earthquake back in 2013.

There are 22 projects of the DOTr in transportation here- 21 of them seaports. This benefits the exiting ports of  Tubigon, Ubay, Talibon, Jagna, Getafe, Clarin and Tagbilaran. With a budget of P560M each, Getafe,Loon and Jagna seaports will have RORO (roll on-roll-off) facilities. There are new initiatives, as well, in Bien Unido, Catagbacan, Cortes, Inabanga and Buenavista.

There is no question, these facilities will provide both “mobility and connectivity” of the island province to our neighbors and the world.

We can only thank profusely the national government and those officials who followed up on the projects including the resigned NEDA chief Ernie Pernia (of this city) who made sure the added features of the international airport came to fruition in his term.

Let us put these new infrastructure adjuncts into their best use, preserve them and not waste their intended purposes with grandiose plans that never come to pass.