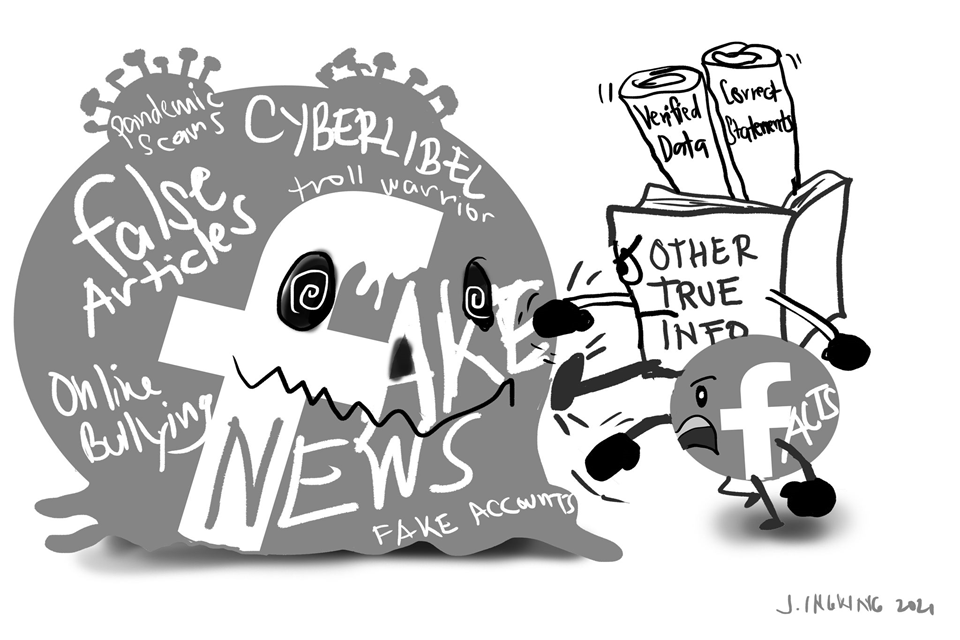 FACEBOOK, USED BY 2.8 BILLION people worldwide in 2021 is the preferred social media platform of people (63%),and can generate about $100 Billion in annual advertising revenues since 200 million businesses use it. It is the seamless wire that connects people worldwide and used to advance business and political goals.

Making the planet smaller through connectivity by Facebook is one of the century’s greatest blessings to mankind. However, used by the wrong hands and diabolical minds, it can be a nightmare for a civilization. It has been for the Bohol medical profession, of late.

The medical community in the province rose as one in denouncing the recent attack maligning the medical profession amidst the pandemic from an FB account called “Bohol Monitor”. It blatantly accused the doctors to have put extra money into their pockets due to the pandemic, betraying their chaste Hippocratic oath.

The Bohol Medical Society, standing on behalf of the physicians in the province, denounced the refusal of the masked marauders to reveal their identities – describing said information source as a “faceless coward  who hides behind a computer screen and taps his attacks on a keyboard.”

The doctors’ group said the “Bohol Monitor” ignored their call to properly communicate with a representative of their group it has accused and shamed very crudely.

The physicians, men of science, have been at the heart of policy-making in the anti-pandemic world since the challenge of the current Covid crisis (which has been largely medical in nature) but with a profound socioeconomic impact on the population. Who would benefit from discrediting the medical profession which is the very frontline that saves people’s lives on the brink of annihilation by a wily virus? Think.

The poor doctors, the hapless victims of these vicious attacks, say the attacks have caused many of them morale-deterioration and given the fact that ( there are many burdens the physicians still have to shoulder on this monumental crisis), the attacks have, therefore, been thoroughly counterproductive, if not destructive. What relatives of Satan would wish our temporal saviors (physicians) ill?

The abuse in social media is becoming glaring and rampant. Many FB accounts are now even masquerading as media outlets but have, in fact, been becoming barkers of some political quarters.  Indeed the social media have changed the media landscape and the world accepts that fact.

And because of the far-reaching FB benefits, hacking has become rampant lately.  The Bohol Chronicle website was not spared from these hacking maneuvers. For four days, it was blocked from view- giving us a left-handed compliment since “no one kicks a dead horse.” Why hack an entity that no one reads?

The Bohol Chronicle, one can conclude, must have hurt their sensitive nerves and since the perpetrators are fearful because the paper has credibility, therefore, hacking it -even temporarily- they thought- was one solution. It gave them respite from investigative eyes and true-blue journalism. How long can they hide?

For sure, the hackers had bad intentions in doing so. And the closest we can guess as to their identity are those who want to silence this advocacy for a better Bohol community through better governance.

And while the mainstream media accept full responsibility for its statements, these FB accounts hiding behind media-sounding names as “Monitor” and “Flash Report” stand as among these cowards who just want their personal gains at the expense of those they want to malign and destroy without accountability for the truth.

We hope the anti-cybercrime of the Philippine National Police and the National Bureau of Investigation will soon collar these culprits in social media, both the hackers and those dishing out irresponsible statements and disclosures without giving their real identities to the public.

The arm of the law is long and soon they will be caught and will be punished to the full extent of the law as part of the wide-ranging list of cybercrimes.

Those who use the wide breadth of Facebook’s audience and FB’s longevity in the social media world by peddling disinformation and lies (to gain illicit personal, political or financial capital) will soon be deleted from Cyberspace.

As had happened to 150 one-China network FB accounts and 54 other home-based  FB accounts that were summarily vanished from the face of the earth by the  FB’s decision in order to preserve its integrity back in September 2020.

As surely as night follows day, they will eventually be caught as the Russian hackers have been – after gate-crashing into the USA 2020 polls- that resulted in the expulsion of Russian diplomats. companies and individuals in 2021.

Judgment Day might come to a trifle late- but it will come. Don’t bet your “paid-hack” stipend on it.