Defending the truth, it’s worth it 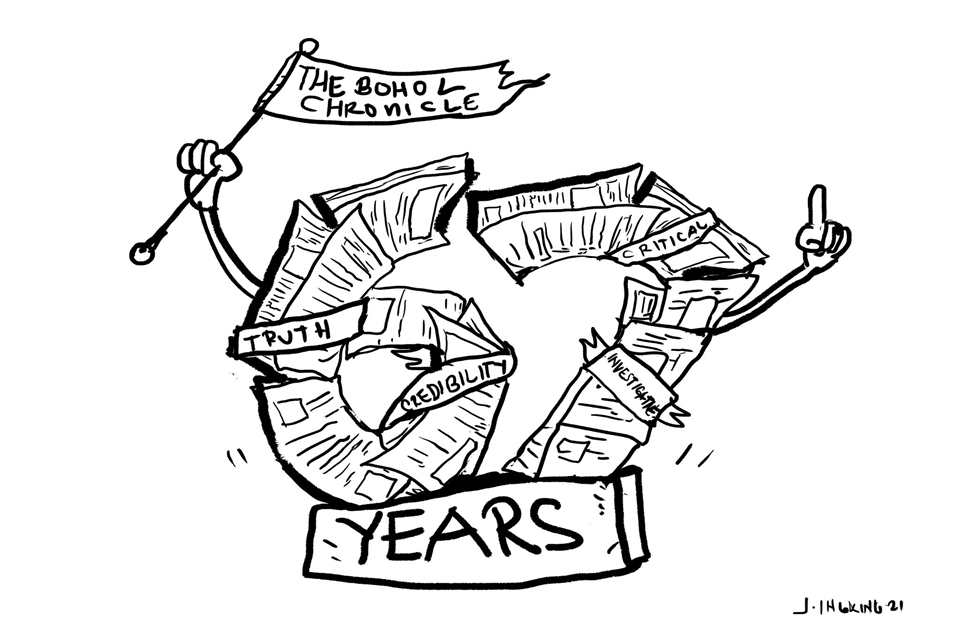 Defending the truth, it’s worth it

Once, when it started in 1954, doomsayers saying either this paper or its founder -or both- will die from lack of business or exhaustion. Second, in 2002, when the “Father of Bohol Journalism” passed on, the naysayers saying that the second generation will not step up the plate.

However, from the original 2-pages, the paper went to 40-plus pages pre-pandemic, has hard and digital versions, and won four national Philippine Press Institute (PPI) Awards. (PPI is the largest print media organization in the country).

Of late,  the paper is one of only eight regional community newspapers invited to partner with the Philippine Daily Inquirer, by far, the nation’s most respected and feared national broadsheet.

Truth must be defended at all costs. That has become some sort of mantra for the paper.

Because it is assaulted daily by institutions corrupted by a policy of lying and because of the conversion of social media into a cauldron of fake news and poisoned opinions by people whose only qualification is the ability to type or touch on the boards or screens.

In the Babel of confusion, society today always needs a “Bastion of Truth” to run to who they observed will leave no stone unturned to arrive at the core of truth and lay on the line its name, reputation and fortune for possible libel and off-court defamation just to tell the public The Truth- and nothing else but.

Responsible media cannot allow its veneer of neutrality and obsession for the truth to crack.

Because we know that for all its romance with the use of social media today, society, by and large,  still resents being lied to. “News is not always what government says it is” and there is no shortage of public stories with vested private objectives. There is always the conflict between the haves and the have nots, the governed and the governors or any sets that have two sides of it and there must be an unbiased referee in between them.

That is what credible Mainstream Media constantly aspires to be. The Chronicle in this case.

Because without sound, factual information, the public can be easily manipulated by the armies of trolls- paid and unpaid- with various agendas that are an anathema to the truth. If the freedom of “informed choice” is a man’s goal-then he must be led to find the truth- the only one that will set him free to exercise his options wisely.

For the Chronicle, truth is absolute and indivisible. Create a half-truth and it is a half-lie. A half-lie embraced is akin to one accepting that women can become slightly pregnant. It is against the natural law.

That is the reason why we try to run after the truth as a dog does for a steak bone, That we do not always succeed is never due to a lack of good intentions and effort. Because we always like to sleep soundly at night.

But the enemies confronting truthful, critical, investigative and independent journalism are many and come in various forms.

There is the threat of physical harm and even death. This comes from both real adversaries and neutral elements alike.

The founder of this paper challenged into a gun duel by a public official at the airport (which he showed up for and armed with a licensed firearm) and threats to rain our editorial office with bullets and a grenade are hazards that surely come with the territory from human adversaries. Being silenced (by force and death) and harassed while on media duty must be accepted as a given for one who wants to be an authentic messenger of truth.

Staying in between an actual gunbattle along a boulevard and witnessing the fierce firefighting between soldiers and terrorists are examples of a call to duty that no media man worth his press badge must shirk away from.

Chronicling events at the eye of vicious calamitous storms is a horrifying risk-taking gambit and relentlessly pursuing human interest stories in the aftermath of the worst earthquake in 2013 won the Chronicle PPI’s “Best in Disaster Coverage” national award. Natural calamities are but – our neutral combat areas. These are not man-made.

Threats of economic strangulation, on the other hand, by tax review harassments, pressuring our allied subsidiaries, and advertising stonewalling and favoring the opposite media- we all bore and passed through those fiery tests. We continue to do so.

In the Estrada days, the PDI (Inquirer) was also seen reeling with advertising blockade from the administration allies and the ABSCBN network was unplugged from its socket recently.  But both also lived to tell the tale in an inspiring drama of test of the wills.

Freedom, after all, is never free.

Misguided elements sometimes accuse us of politicking but politics is an allergy to us- the game we are not inclined to play even if was the only remaining game left in the universe. From the time of the founder to today, there have always been offers for elective and appointive positions that we, as a matter of course, will generally decline- preferring rabid independence versus subservient alliances.

We know politicians, even bishops and generals come and go.  But our 67-year old logo still proudly remains floating today, by God’s grace and the support of the staff, readers and advertisers. Why settle for the fleeting glories when the long-term rewards beckon?

Libel cases to us are, likewise, a dime a dozen and we do not recall ever losing one -as they could never prove malice, a special ingredient in successfully building a case of libel.

Of late, one has heard of masked marauders crusading as journalists as those behind the “Bohol Monitor” who dispenses news and what-have-you depending on who butters their bread and not always in the pursuit of truth.

Our own online version of this paper ( The Bohol Chronicle) was even hacked recently for three days- the enemies of truth unable perhaps to stand the heat of a bothered conscience heckled perhaps by our constant exposes(?). They enjoyed three days of untruth- at the most,

But we also have good news here. Articles about honesty, government landmark achievements, personal acts of greatness, fund-raising for disasters and edifying individual stories of humanity (including community pantries ) we allot space for- in order to “completely capture” the entire essence of Boholano history etched in every page of 67 years of Chronicle publication.

Public service, to us, is a public trust. Service, not profit- is our motive. Truth is our Goal.

And it has all been worth it.