We inform, you decide 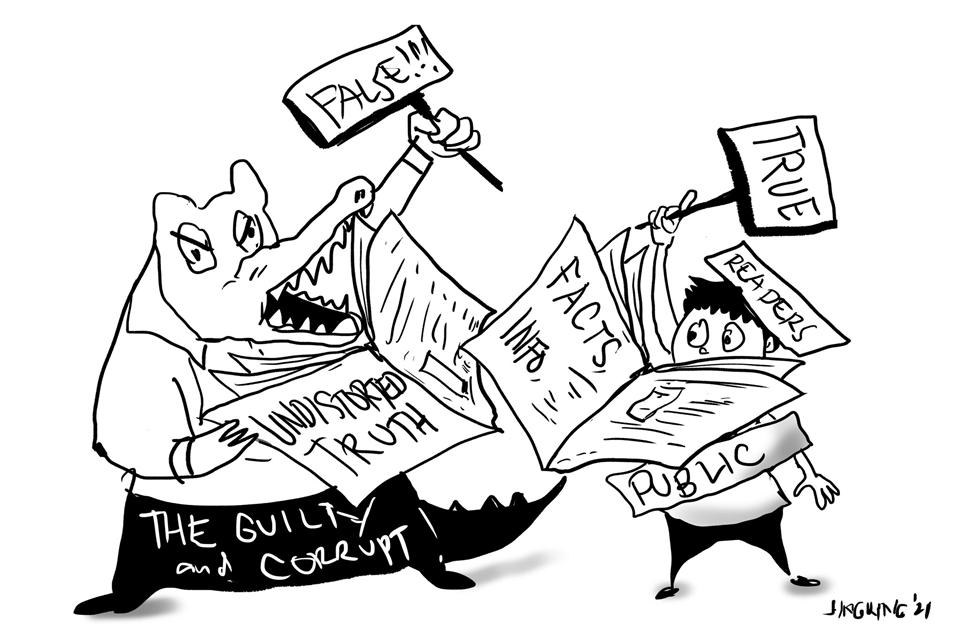 We inform, you decide

THAT IS NOT OUR original slogan. That is of Fox News. But we borrow it for now.

Because that is all our news departments in the newspaper and radio alliance do daily. The outcome of such straight news- whether it adds slime to the already mud-laden faces of officials (due to their own making) in the eyes of an already-disgusted public is not our doing, not our intention nor do we care, frankly, dear readers.

These officials presented themselves to the public to be their servants- to provide projects and service with a clean slate and got elected on those promises. If the public perceives them to be both incompetent and corrupt, media, the messenger has nothing to do with that. They have their own multi-million budget to sway public opinion (even with supplemental budgets), why blame the media if the public looks at them with jaundiced eyes?

Least of all, we are not in the business of confusing people-what does media get out of that? If that is all we peddle all day- will we have enough listeners and readers to patronize us- then, now or ever? Distorting the truth does not help our business.

Governor Art Yap cannot be the father of the province on some days and not on others. He was quoted bare-faced that Capitol was not going to spend millions for low-refrigeration freezers (-80 degrees) and would rather buy more vaccines. National IATF, thus, bypassed delivering Pfizer to Bohol for that same public reason. As “Papa of Bohol”, Yap knew not that his primary hospital (Gallares) ordered and got such freezer? Did media create the fact that they (anti-Covid team) do not seem to be communicating well with one another, a facet needed in good leadership?

Through FB, the city and provincial governments showed the kind of refrigeration systems they have. Media, as the Fourth Estate, challenged the government to show as well what Gallares’s Hospital freezer purportedly was. Was there a need to show that or public skepticism on what the government says has gone so high that the Doubting Thomases had to be shown literally through their human senses? Who is responsible for making the public both skeptical and confused by miscommunication, Watson?

Further, we merely quoted the summary of vaccines purchased by the national IATF which listed Pfizer as tops with 4O million doses, Novovax (30m), Sinovac (25m), Astra Zeneca (17m),  and Moderna (13 m). We were not instigating the public to demand the Pfizer type of vaccines although the majority of the citizens really do prefer that kind of American brand. Who is confusing who?

For more than six decades, the Chronicle had tried to run after and print the truth. We want our dear followers to read us, not to make our printed copies as wrappers for fish from the market. We quote sources and allow the aggrieved to say their answers unless they themselves are allergic to our newspaper logo and refuse to be interviewed. Let’s cite examples.

It was a group of aggrieved contractors who blew the whistle that favored fair-haired boys (mostly out of the province) cornered major government projects; they even disclosed ways how biddings are circumvented. Disgusted anapog-miners disclosed that a mysterious phantom (Ivan) was skimming percentage from their produce. The former city mayor Dan Lim filed a legal case at the Manila Ombudsman for various Capitol shady deals. Did Media invent all these to sow confusion?

Despite our past years of mortar warfare with Dan Lim, we never allowed our personal feelings to get in the way to pursue the truth for the greater public interest. We gave Lim space and airtime for the public grievances- not seeking nor expecting any apologies from him for the hurt he inflicted on our institutions. If there is any doubt in anyone’s hearts about our motives as a media entity, let the Lim episode speak for itself.

It is election time again and every politician is now overly conscious about public opinion confusing it immediately as a political tactic to browbeat politicians. We conducted a station dyRD survey which showed how resoundingly Boholanos were turned off by this planned P24-M purchase of new vehicles by the SP at this time of the gravest pandemic in our memories.

In our past Editorial, we agreed those vehicles need to be replaced but the timing of the purchase is awfully bad, buddy. There is starvation, loss of jobs and income and the threat of a virus on an overhang. Postpone it a few months, maybe, we hinted- but of course, there’s an election campaign coming. And now- everyone and his uncle involved in the unpopular allocation are washing their hands like it were a hot potato.

But there are public documents available- for every citizen to legally ask for and see- who recommended the purchase and the itemized designation for whom the 14 brand new vehicles were going. “News is not always what government says it is”. Enough ducking like Mayweather.

And just because the Media prints bad detrimental news against certain incumbents does not mean we are engaged in politicking or politics, a useless game to our minds that’s why we never (will never) enter that arena. When we translate what the bar of public opinion said into the news- we are not fomenting propaganda, we are broadcasting and printing news about survey results- which was conducted live.

At the end of the day, people will be able to distinguish between the onion-skinned and the seasoned politicians. Those who do not want to be criticized nor questioned by Boholanos have no right to run again because they will always be enslaved by their sense of “righteous” entitlement. And even if the black stars favor them and win mandates with the help of P200-300 voter’s price, what kind of legacy will they really leave behind to those who know better and will judge them in history?

Let us be clear about this. We have long drawn the line on the sands of Panglao. That line is called “public interest”. Once crossed, we are no longer allies.

GUNS IN THE HANDS of good men can be useful to protect oneself and others and maintain peace and order. In the hands of bad men, they can be used to kill or terrorize other men or maim animals.

Large budgets in good public officials’ hands result in progressive communities with above-board projects and impeccable service; in bad ones, they can lead to inferior projects and bad service and, thus, merely fatten the wallets of officials and their private-sector collaborators at the expense of the tax-paying general public.

What has been deliberately kept from public view by our official Houdinis-in-Office is that next year- 2022- will be the first year that the Supreme Court-directed implementation of the so-called “Mandanas Ruling”. This is a landmark decision initiated by Batangas Governor Hemilandro Mandanas and former Bataan Governor Enrique Garcia Jr.

The landmark SC decision cited that based on Sec.6, Article X of the 1987 Constitution, LGUs are not entitled merely to a percentage of the total collections of the BIR (Bureau of Internal Revenue) but several other sources, as well.

By 2022, therefore, according to the Department of Finance, the share of the first-class province like Bohol will increase from P814-M to P4.4 B. First-class cities will hike from P394-M to P2.1-B while first-class municipalities will improve from P187.6M to P1.0B. It’s one helluva windfall just sitting there in positions of power at the right time.

Of course, this will have to dovetail with the unprecedented P5.02 Trillion proposed National Budget for 2022 which will be passed this year which will also devolve some functions from the national government to the LGUs. According to official statistics, for the entire country, the tax base for LGUs will register at all-time highs of P354B (2022), P382B (2023), P420B(2024) and P406B(2025).

The civil society organizations, media, the Commission on Audit- here- the VACC (against Crime and Corruption) and the Anti-Graft hotline of the President’s Office will have their hands full looking over this new abundance of funds especially under the jurisdiction of persons who may have been linked to graft and corrupt practices all their lives or support others who are.

Meantime, two bills have reportedly been filed in Congress by opposition Reps. Aris Aumentado (2nd district) and Rep. Alexis Tutor (3rd district) to redistrict Bohol from 3 to 5 districts that would have resulted in bigger aggregate national government fund allocations to Bohol by reportedly an additional P600M to P2 B per year.

This scheme which has been successfully implemented by other provinces to secure more developmental funding is “stuck” as Rep Aumentado calls it- not getting apparent support from Capitol. One of the criteria for the House of Representatives to consider redistricting proposals is that such has been discussed in consultation with the local Sangguniang Panlalawigan, which, of course, is under the baton of the Capitol.

When is the increase of developmental funding for a province good (as in an increase in the share of national taxes) and not as good (when done through redistricting) in the eyes of the powers-that-be?

Is it in Watson’s broken English- it’s depend- on who controls such funds- the real answer? What do our thinking Boholanos have to say on this?