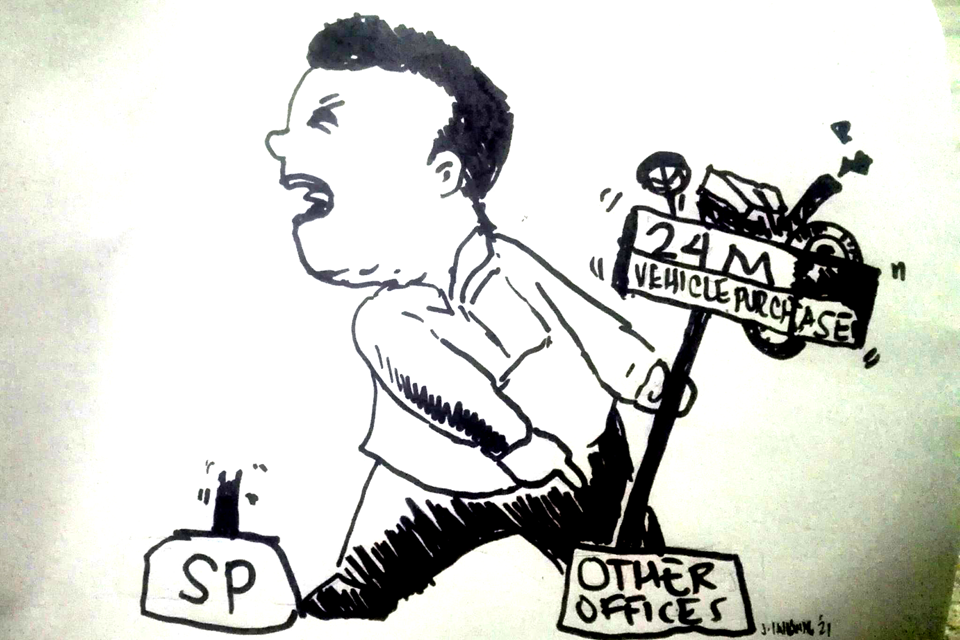 “A politician thinks of the next election; a statesman- of the next generation”- James Clarke

THE POWER OF PUBLIC OPINION- is the reason Vice Governor Rene Relampagos and the SP purchased P24-Million worth of vehicles but immediately reassigned them to certain offices.

Media had nothing to do with it. It merely recorded the voices of an angry people in a survey concerning the controversy. VG dismisses that this is just the opinion of “the same, few people” playing politics and not the tsunami of anger that this ill-timing and insensitivity had generated on a large segment of Boholanos.

But, if this is so- why bow to this opinionated sentiment of the “same, few” people and transfer the use of the vehicles elsewhere?

Were they afraid that through the action of 8888- the citizen complaint center under the office of the EXecutive Secretary Salvador Meldiadea- in turn, asking the DILG, that this will lead to the floodgates of a no-nonsense investigation?

We stand by our headline last week that it was President Duterte- acting through the office he created and had lent his authority (8888)- who was the one perhaps scandalized by the impropriety of the purchase amid the worst pandemic- and sought the inquiry. Let us elucidate.

When Pope Francis, for instance, decrees ex-cathedra a directive- and announces through the church’s prelates, say, by Bishop Abet Uy- to the populace, this does not diminish the Papal authority on the same. Well, if in doubt, ask Secretary Martin Andanar.

It is just hair-splitting -with the same results-when VG obfuscates the issue that what they are buying are mere Pick-Ups, not SUVs. (We printed a Pick-Up photo on last week’s page – go check. Pick-ups and SUVs are also almost priced the same. See Page One today).

The real issue here is not whether it is a goose or a gander- the issue is – is the timing proper to buy for-personal-use vehicles  P24-M worth when people are starving and death is upon us through the virus, right?

A government-purchased testing lab just broke down (and prolonged the results) and the vaccine program facing some drawbacks and therefore makes the “herd immunity” to the economic recovery seem distant-is this not more compelling an issue to address? That’s what people can see and are asking.

The VG proudly says for the record he has been using his own vehicle and will continue to do so. If this were so, why purchase 14, not 13 vehicles when one (sic) is not needed (and there are only 13 SP members including the ex-officios)?

Is this not a waste of people’s money when on top of that, they will also retain the “expensive to maintain” and “dangerous to life” old vehicles on top of spending a fresh P24-M for the new vehicles? Why not sell those old vehicles and add them to the pandemic funds?

We are sure the partisan critics will also secure photos and plate numbers of the new vehicles and document whether any of them will be used for the political campaign period for the May 2022 polls.

The VG – in an argumentum ad hominem- said the provincial government had spent millions for the Covid fight which is, by the way, every government’s look-out (and coming from people’s taxes); it does NOT justify a badly-timed inappropriate purchase. The government is not mandated to spend on a quid-pro-quo basis but on the necessity and perfect timing of things.

Some people insist this a politically partisan issue- it is not. It is not – because those who will benefit from the planned P24-M are not all administration party-mates, some of them are in the opposition. What politics is involved here?

Our suggestion to our detractors is that rather than turn red on the face and raise their voices to defend their indefensible position, that they strengthen the logic of their arguments- and convince- not bully people- into their way of thinking.

ARE THEY DOING SOMETHING CONSTITUTIONAL?

“Education is the progressive discovery of our ignorance.”-Anonymous

SOMETHING FOR THE LEGAL AND FISCAL MINDS. On July 1, 2014, the Supreme Court, in a vote of 13-0-1, decided that the DAP ( Development Acceleration Programs) was unconstitutional.

(To recap, it appears that the VG/SP had decided to use the purchased vehicles bought from their Legislature’s budget to offices and agencies belonging to the Executive Department.)

In summary, the SC declared three reasons why DAP was unconstitutional: (a) cross border transfer of the savings of one branch of government to another (b) allotment of the project activities and programs not outlined in the General Appropriation Act and (c) creation of savings prior to the end of the fiscal year and withdrawal of these funds for implementing agencies.

Was the assignment of the fruits of the Legislative bUDGET (vehicles) to the Executive branch (offices) not a de facto unconstitutional cross border transfer of savings? Were there savings in the first place when we are too far away from the end of the fiscal year?

In this era of the strict line rather than lump-sum budgeting, is the diversion of the use of the funds not mentioned under the GAA specifications not largely a case of technical malversation?

As far as we know  (under the 1987 Constitution)the Executive Offices and constitutional bodies (Comelec, Sandiganbayan) can move their savings as long as it stays within internally and not coming from outside like the approved budgets of the Legislative and Judiciary separate branches of government.

It might be good for SP to look into this before it gets into bigger trouble than it already has.

And let everyone be reminded that no amount of tirades will keep this Media from pursuing leads and commenting on issues that will affect the public interest. It is our calling- we will answer it- even if every criticism we have of government is labeled as politicking.

The greatest prison that Media can ever live in, is the fear of what government will think of us. We have no intention of living there. We will not print or broadcast only those things that government wants otherwise we might as well apply to be their extension office.

Censorship begins when nobody is allowed to say things except those things that no one believes. “News is not always what government says it is.” We are the Fourth Estate. If all of us will chorus to the baton of government whims, then let us just bury democracy six feet underground. Do any of you want that?

Lastly, we come in praise of Project 8888. It stands for public participation and social accountability. Any citizen can participate with guaranteed protection from reprisals by the guilty parties. It generates immediate and appropriate government response like in this case.

The 8888 was not meant to taint people’s reputations and destroy the government. But precisely it is to give citizens the satisfaction to have their grievances redressed. It is precisely to correct misdeeds, improve citizen satisfaction and restore people’s faith in the institution of government.

We enjoin people of good faith and patriotic intentions to continue to use 8888. And public officials should stop “serving kings and start serving a kingdom.”