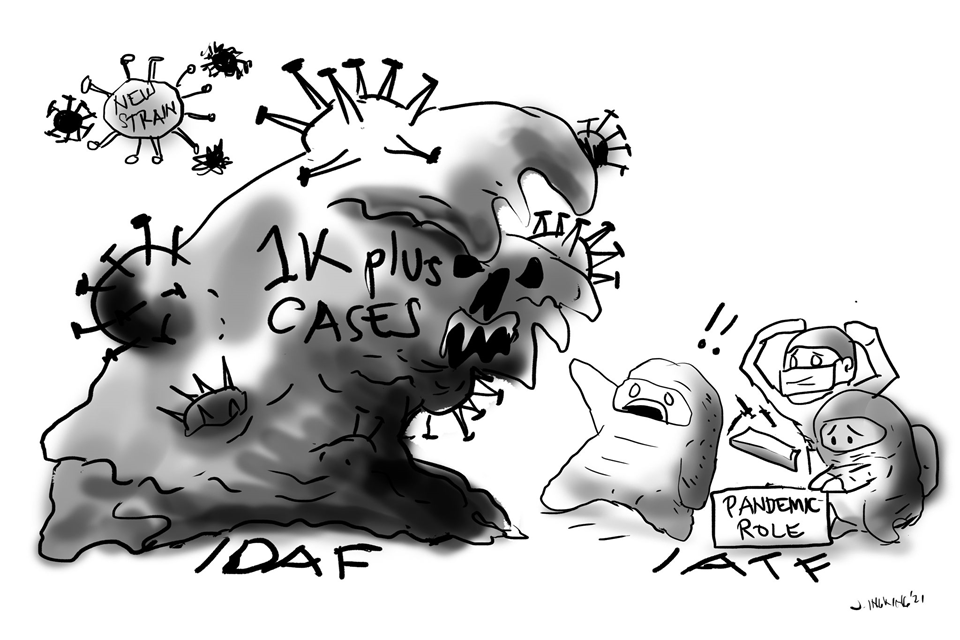 NOW THAT 1,403 COVID CASES have been spotted for Bohol, compared to just 300  cases when the pandemic started, there is a need to evolve the IATF into a more pro-active medical crisis governing agency.

Since Gov, Art Yap is the head of the BIATF (Bohol Interagency Task Force), it is his responsibility to change his directives with the evolving medical realities. It is not enough to tell the mayors to effect localized granular lockdowns and ask their police and barangay forces to impose health protocols especially with regards to gatherings and in public vehicles.

He should have his own spies across the towns and not hesitate to summon mayors for reprimand and/or suspension where there is clear neglect of mandated local supervision. All of the new cases seem to have been locally transmitted.

While at it, the public is asking just what kind of budget has been allocated to contract tracing? Can someone be forthright and say how many contract tracers are now employed in Bohol and in what locations? Contract tracing seems to be the lone key factor that Vietnam, which is almost a large as our country, used and has very few Covid cases still up to now.

Unlike before when public quarantine places were used in their towns, now most are reportedly homebound and no one is really looking if strict protocols are observed there- and homes are the worst kinds of virus-spreader.

It would also seem that the people are at a loss where to get advice for every kind of Covid-related question they have. The Chronicle bannered last week about the establishment of the so-called EOC (Emergency Operation Center), but nothing seems to be moving. The public is demanding that the IATF have a dedicated HOTLINE number ASAP for inquiries on Covid-related matters.

We suspect that Covid-suspected patients from the district hospitals are not clearly apprised on what to do exactly and, therefore, rush to the city hospitals only to be told there are no more Covid hospital spaces.

Moreover, from June 28 up to July 5, the mobile laboratory of the provincial government and the molecular laboratory of the Gallares Memorial Hospital have been alternately in suspended operations due to “maintenance work”.

Does this mean that for 7 days, we are in “limbo” as to how many “actual” additional cases are really smoldering ( since we are without fast lab results) and the afflicted are all out there infecting other people? Will Boholanos have the shock of their lives once these two test result centers become operational again?

Some people are scandalized that after less than a year after the installation, these “new” machines are now requiring some kind of maintenance or another. Would the COA (Commission on Audit) flag these purchases and find out about their cost and efficacy because their constant suspension (too soon) is prejudicial to the public interest?

Truly, with the Covid at an all-time high here, the public deserves a BIATF that is more than just a counting machine of new cases, cumulative cases, recoveries and deaths. We need more proactive stances than that.

We need more forward planning and an announced timeline for the general public so that they are not left on needles and pins on their anxiety as to “what next”?

For instance, people hem and haw about the lack of doctors and nurses here- so what is the government Game Plan to have enough of them for both Covid and non-Covid cases? We know for a fact that non-Covid cases are now attended strictly by private hospitals and are relying only on 78 doctors serving over a million Boholanos. What should be done by the government even if it’s a private hospital look-out?

Nursing tests have been scheduled- have we contacted Boholano nurse test-takers and engaged them beforehand with an offer to serve Bohol hospitals first? Who is in charge here for the establishment of the equivalent of a “corporate plan” in the midst of a medical crisis? We cannot afford to be “Managers by Exception” in this kind of a raging environment.

We also know from Day One that the real solution to the problem is the achievement of the “herd immunity” number of vaccinated people- nothing less. The national government had already said they are confident in getting 70 million people inoculated by December this year. That means they already know the schedule of arrivals of the vaccines here till then.

So, has Bohol lined up for its due shares and therefore can at least tell the people from June to December- the expected number of Boholanos targeted to be vaccinated per month based on that schedule?

How much has the government actually allocated in terms of budget to do a “serious, massive” campaign program to enthuse Boholanos to get vaccinated as our way to economic liberation?

Are these allocations in the normal GAA of the province to provide for additional quarantine facilities and the personnel to supervise them so that they are used well?  They could be used alternatively as nursing grounds for less severe Covid cases, as well. Are they not the answer to the current lack of Covid spaces in hospitals?  Budget for contract tracers as well?

One doctor said – there is widespread “pandemic fatigue”- among health workers and the public in general. But the government, as the steward of the community, cannot afford to suffer that as well.

It is, in fact, in times of crisis, that government must rise up and lead.