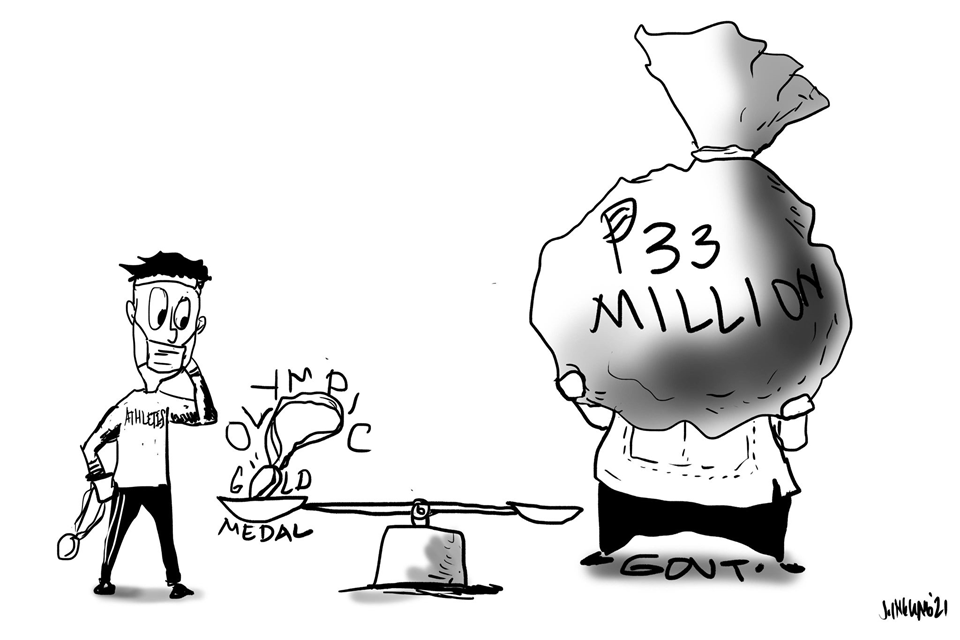 POOR GOVERNMENT SUPPORT for Filipino athletes has long been the cause why we fare poorly in the Olympics. Both in absolute peso amounts and as a percentage of the National Budget, the support has been minuscule compared to our neighbors Indonesia, Singapore, Malaysia and Thailand.

Remember Hidilyn Diaz, our weightlifting silver medalist in the 2016 Olympics? She once complained she had to look around for a decent gym and modern weights to practice for the Olympics.

That explains why after close to a century of our participation since 1924 (excluding the demonstration sports) RP never won a gold medal. Only three silvers and 6 bronze medals to show for 97 years in the Olympics which 2021 version opened last week in Tokyo, Japan after being delayed a year due to the pandemic.

In many countries, national athletes are deemed national treasures. They are being taken care of -body and soul- and could look at sports as a source of livelihood to support a family. But RP has learned its lessons, it seems.

Now, combining the P10M each from the Philippine Olympic Committee, businessmen Ramon Ang and Manny Pangilinan and sportsman-congressman Mike Romero’s P3-Million, the Filipino gold medalist can take home P33-Million. Invested well, this can last the athlete a lifetime of no worries- and concentrate on the sports he/she excels in. The silver medalist rakes in P17-Million and the bronze medalist P7-Million.

In one of the smallest contingent sent to an Olympics, our chances have never been brighter for at least one gold, perhaps a couple of silvers? Watch out for these names in the global event that started in Greece some 3,000 years ago for our national anthem to be played in Tokyo.

Gymnast (21) Carlos Yulo ( 2 golds, 5 silvers in the SEA Games), Hidilyn Diaz for weightlifting (4-time Olympian and silver medalist in 2016 Olympics), Fil-Japanese Yuka Saso (20) ranked No 9 in the world golf and recent winner of the US Women’s Open, EJ Obiena, Top Filipino pole-vaulter who recently broke his Philippine record at 58.7 meters and has been training abroad and top bet Nesty Petecio -Listed as No 2 Featherweight woman boxer (1 gold, 3 silvers in the SEA Games).

What about basketball- the nation’s favorite sport? Despite the absence of 7-3 Kai Sotto but with the entry of bull-strong Thirdy Ravena and the comeback top gunslinger Dwight Ramos, the cage team should aim for silver and settle for a bronze, perhaps.

In high school, he opted to join sports rather than cut grasses and went to Silliman University and trained with coaches for his high jump.

Similarly to be honored though in a lesser fashion should be basketball Boholano star Lauro “Fox” Mumar who was part of the dreaded RP cage team that placed third in the World Basketball Championship next to the USA and Brazil in  1954. RP beat world-class teams like Paraguay, France, Canada, China and Uruguay for the bronze. Mumar scored 24 points vs Canada and 22 points versus Paraguay.

Lauro was called the “Fox” for his wily moves inside the court. He married a Rama from Cebu and had a great cage star for a son in Larry who was the first husband of actress-host Coney Reyes, mother of Pasig City mayor Vico Sotto.

So, set your monitors, folks- from July 23- August 5. And when you see and hear on TV- the Philippine National Anthem- it’s not your Tv set folks.

WHILE THE WORLD RACES AGAINST TIME to vaccinate the populace, the Delta Variant of Covid-19 suddenly raged globally in over 100 countries; now the King of  Covid-19.

It is more transmittable ( 8 victims for one patient) and can kill far worse than the original virus especially among the non-vaccinated. They first raged in UK, India and the USA.

In America, 80% of the states report new surges with  83.2% of them of the Delta Variant variety. In spite of the wide vaccination coverage, America reports 37,000 new cases a day.

The Delta Variant seems to have turned violent in retaliation perhaps against the vaccination forces fielded against its cousin virus. It is now the dominant strain worldwide affecting over 100 countries. Alarming, to say the least.

Not the least scared of the typhoon and the earthquake in Batangas, the Delta Variant has arrived in Luzon: 17 new cases bringing the national total to 94. Of the 17, 12 are in Metro Manila and 3 in the Calabarzon. As sure as the sun rising in the east, Delta Variant will land in Bohol. It is only a matter of time, so says, Governor Art Yap. Are we ready?

Like elsewhere, the vaccines are coming in painful trickles. Some 50,000 doses from Johnson and Johnson arrived for Bohol last week (trumpets blaring) but our target is to immunize at least 800,000 Boholanos- to put that scarcity in proper perspective.

Viruses are used to having their type mutate in kind in past or present forms. Are we prepared to cha-cha to their new dance as potential victims? Are our hospitals at par and ready?

As of Friday morning, only seven of the 68 Covid-19 ward and isolation beds at the Governor Celestino Gallares Memorial Hospital (GCGMH) were available. It is the main Covid 19 referral hospital and the only tertiary-level health facility. Eight of the 14 ICU beds were also occupied.

It behooves the government, therefore, to marshall all available resources to contain this medical crisis that has evolved likewise into an economic nightmare for hundreds of thousands of people here-losing jobs and facing little mobility in transport. Better to focus here first and defer all fancy, epal programs for later because, truly, Covid 19, not the first virus to hit us -will also certainly not be the last.

Are we thinking way ahead and improving our defenses? Instead of daydreaming under the guava tree about the May 2022 elections?For comments: email to dejarescobingo@yahoo.com or bohol-rd@mozcom.com