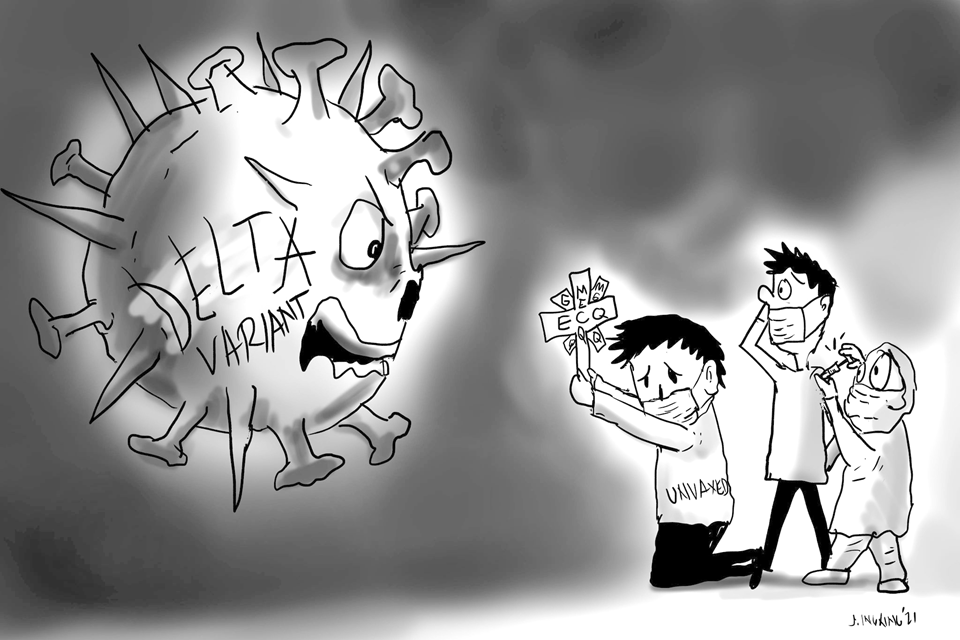 AS EARLY AS 2020,  astute scientists had already predicted that the Covid-19 virus (like  most viruses) will mutate-but never expected that these variants will be this virulent,

The Delta pandemic is on and the “entire world is turning red.”  Lockdowns are everywhere threatening the global recovery that somewhat quivered alive as one billion people of the Planet Earth have been vaccinated. Even the Tokyo Olympics – the top-rated global event- which has been postponed for a year- is ongoing without spectators for the first time in world history. It’s an eerie sight found only in the movies until now.

The New Wave is a page out of the worst horror book; a nightmare akin to be among the “Walking Dead”.Once inside a patient’s body, the Delta carries 1,000 times more viral allies and multiplies and spreads faster than the original Covid-19. One patient infecting 8 others is commonplace.

Amidst this apprehension, the nation is again rocked with paralyzing fear as figures on people contaminated with COVID-19 skyrocketed again, even more than its First Wave a year ago.  Figures showed 2,000 new COVID positives in just two days.

So the  (National Capital region) NCR goes back to ECQ Enhanced Community Quarantine starting Friday. This is closely similar to a debilitating lockdown last year. Reports from Manila said that many have stopped their operations, mostly working from home instead to avoid becoming part of this variant super spreaders.

Loss to the economy will be in the billions (even for just 14 days ECQ) even as the Government scrambles where to source the P1,000 per person “ayuda” during the ECQ days. Surely, we face once again the specter of last year’s ignominious distinction as the worst-performing economy in the ASEAN region; it can do an encore this year. For sure, the 4.5 percent  Philippine GDP growth for 2021 as forecast by groups like the ADB (Asian Development Bank) may have to be rehashed southwards.

The Philippines could revert to our anemic $362.24 GDP value suffered in 2020. What about Bohol?

Tourism in Bohol, its flagship industry, will again be back to where it was when lock downs were declared a year ago. Why? Because the three airline companies announced the cancellation of their flights from Manila with Cebu Pacific starting today; Philippine Airlines tomorrow and AirAsia flying on selected days only.

For sure, the trickles of tourist arrivals will be back to zero again.  Major players such as Henann Resort, Modala Resort, Bellevue Resort, South Palms, Bohol Beach Club and the entire Panglao will become parts of a ghost town again. Can the locals from Tagbilaran sustain the business operations of Panglao and Dauis resorts and restaurants during the next NCR lockdown? Agriculture, on the other hand, is still a work in progress and no material advancement can be felt as of yet.

But overall, it’s a good decision for the ECQ to be imposed now rather than do the tight protocol only when the upsurge is already beyond our control.

The “Adviser for Entrepreneurship” Joey Concepcion likewise is of the opinion that it’s better for the ECQ this time in order to save the last quarter from leading to a very bleak Christmas. Note that many Retailers make 75 percent of their sales during the fourth quarter leading to the Christmas-New Holidays.

He was right to say that now is the time. The timing might be good, he said, since the rainy days are here anyway this month and people better stay at home than get soaked in the rains at the Metro streets and get colds and coughs.   But what is necessary during this 2-week ECQ is the continued arrival of vaccines so vaccination can be doubled as it is going very slow.

Remember- and don’t forget to tell your anti-vax friends this- vaccination is still the key. In America, 95 percent of the new hospitalizations (mostly due to the Delta) and the new Covid deaths were unvaccinated people. This is not the time to commit suicide and run away from vaccines- and worse, infect your neighbors.

We hope Bohol, though, and the other provinces will not be  once again forgotten when the Imperial Manila advertises its  SOS alarm and demand that vaccines will just be saturated in NCR and put off the provincial areas in the meantime.,

For Bohol, the best thing to do is to be very strict in the border points at the Bohol Panglao International Airport and at all seaports.   Seaports? Yes, as the Delta variant has started to spike among Covid patients in the neighboring provinces of Cebu and Cagayan De Oro in Mindanao. Ports like Jagna should be well guarded aside from Tagbilaran, Tubigon, Getafe, Talibon since Jagna is the gateway from Cagayan de Oro, for one.

We need to doubly secure the entry of people from Cebu. The drivers of cargo trucks delivering goods to Bohol every day should be checked with intensity. We hope the prohibition for drivers to disembark from the vessels will still be implemented and that Bohol-based drivers take over the trucks upon reaching the seaports here.;

Because- the latest count of Covid deaths in Bohol as of 9 am yesterday is nearing 200, (as its 199). Our banner story last Sunday quoted top physicians all saying that it’s difficult to immediately detect the Delta variant.

Until today, no categorical pronouncement could be made if any of the 199 deaths are carriers of the dreaded variant.  Active cases as of yesterday totaled 693. However, this is quite low considering the 4-week maintenance work of the PCR laboratory of the Gallares Memorial Hospital. Obviously, fewer swab tests mean fewer Covid positives.

The Gallares PCR resumed operations the other day. And the provincial government containerized PCR laboratory bogged down (again?).  So we expect less increase in the Covid positive figures but it’s simply because there is less testing done. We may be deluding ourselves into a sense of false confidence with the lower figures.

Hospital rooms all over the province are overwhelmed already so that any higher upsurge (God forbid) will eventually make Bohol be like Cebu and Cagayan de Oro City where patients are treated inside ambulances waiting for an available hospital bed in the ICUS and isolation rooms.

That will be the most chilling episode of this seemingly never-ending nightmare.

IN MANILA, WHEN IT RAINS, it pours. It seems that way in the Tokyo Olympics, as well.

Tokyo was so good, the Gold Medal  Story of weightlifter Hidilyn Diaz, overshadowed all the news of President Digong Duterte’s last SONA the following day. It was a bit of poetic justice, perhaps, that Hidilyn won over her best rival from China and she later wore a teeshirt emblazoned with “West Philippine Seas”.

Asked about the teeshirt, Diaz said ” Atin, ay sa atin.”. Short and sweet like her 3-minute performance that won the nation the first Olympic gold medal in 97 years of participating in the Olympics since 1924.

Columnist Solita Monsod noted this ” 4’11 shrimp of a woman” carried more than half of her weight in barbell (127 kg to her weight of only 54.9 kg.). She won the silver medal back in the 2016 Rio de Janeiro Olympics but things even turned bad after that. It seems.

She was accused by a government spokesperson as part of the “destabilization plot” against the government. She must have asked herself incredulously then-how could a girl who fights for her country in sports now aim to destabilize it? May logic,ba?

Hidilyn gave up her schooling up at St. Benilde to concentrate on training. She went to Malaysia to train only to be stranded by the pandemic there. Her government budget for training was only for 60 days and the Asian Games were canceled. Then news about the Olympics being possibly canceled broke her heart and brought her anxiety and mental challenges.

But due to the kindness of Manny Pangilinan’s Foundation, she and her team continued training in Malaysia- not seeing her parents for almost two years. She trained in a condo whose tiles would give way anytime she put down the heavy weights on the floor during the training.

She had to jog in a parking lot and took yoga to calm her mind and sanity. The prayers of her countrymen and the Miraculous Medal of our Mother Mary which she wore akin to a wedding ring buoyed her up unto the last minutes of the competition.

She cried a river while the National Anthem of the Philippines was played as all of her countrymen were also in near tears- mostly for joy. She would recall- with some pain- how in the weeks leading to the Silver Medal in 2016, she would run around Manila looking for a gym with legit weights just to be able to train herself.

Hidilyn called on her fellow Filipino Olympians to keep on believing they can- and throw their best out there. Now, we have three boxers Nesty Petecio, Carlo Paalam and Eumir Marcial (boxers) and pole vaulter Ej Obiena who are in the running for medals. Petecio is already assured of silver and goes for gold on Tuesday.

A possible wedding with her trainer and finishing two more semesters for a college degree at St Benilde are two happy moments Hidilyn will face soon.

Now our contemporary heroine is over P50-Million richer in cash, cars, real estate and free airline tickets. She bucked all odds and slammed all barriers to bring the  Philippines- after a long time- honor and pride again as a nation.

If we win another gold, and we can feel it in our bones it is coming soon, it will be because one brave girl stood up and dared all adversity to strike her down. “Pilipino ako, I will not fold up and die.” And what an inspiration Hidilyn Diaz has been to all of us.

(Erratum in last week’s Editorial. We inadvertently included the basketball team of RP when Gilas did not qualify for the Olympics. Likewise, a Dutch (named Peter) who married a Boholana who is back in the Netherlands corrected us that the pole vault record of EJ Obiena is 58.75 meters, not 587 meters. Our apologies-Ed).