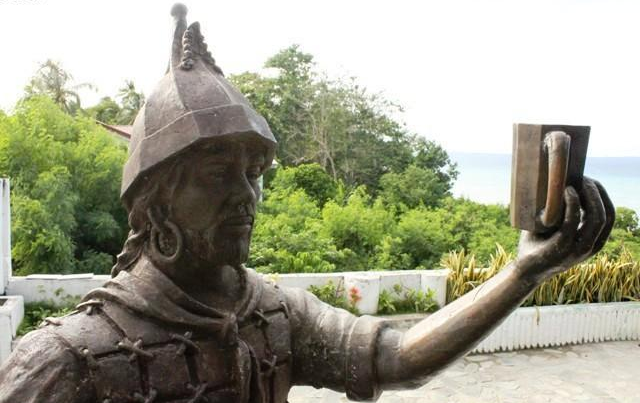 Last week I wrote about the little known facts about Chief Sikatuna. The records are already interesting but not known to everybody is that these facts indicates additional hidden meanings to an initiated Freemason.

In 1989, when I was yet a City Councilor of Tagbilaran, my colleagues requested me to translate into Sugboanon Bisayâ the English statements of the Blood Compact marker found at Bool, Tagbilaran City.

In order to make an accurate translation I tried to research in the Bohol Provincial Library as to the original Spanish statements, if there was any. Luckily I found Spanish books known collectively as “Ultramar de Filipinas”. These books contained the writings and reports of the members of the 1565 Gen. Miguel Lopez de Legazpi expedition. They are written in unedited Spanish in the form that was not yet standardized. The Spanish language was standardized by Miguel de Cervantes when he wrote his novel “Don Quixote” in 1609.

When I read the records, I found out that they were different from what was written in our history books. I consulted my Spanish language teacher, the Late Mrs. Remedios del Rosario to guide me as to the meanings of phrases that are “figures of speech”. The records are full of them.

Another person I knew who was more knowledgeable in the Spanish language than I, was the Late Arturo Fortich. He was a member of the elite family in Tagbilaran City that were yet speaking Spanish when he was growing up.

When he read the record, he seemed to pause and finally exclaimed, “What? Sikatuna was a Freemason?” I was also surprised because when I read the record I was not able to obtain his understanding of the record. He then explained to me why he think that Sikatuna was a Freemason, he requested me to research some more. When I researched some more, I also came to conclude that Sikatuna was a Second Degree or Fellow Craft Mason. Furthermore, the other Chief, Sigala, who also made a Blood Compact with Gen. Legazpi, was a Third Degree or Master Mason.

The statement that made WB Fortich suspect that Sikatuna was a Freemason was “sacandose de los pechos cada dos gotas de sangre = extract from each breast two drops of blood.” WB Fortich said, “If Sikatuna made that motion of extracting blood from the breast, how does it differ with the proposed penalty in the 2nd Degree? It will be the 2nd Degree because it is specified as “two drops of blood”.

An ordinary person, even if he will read the statement a thousand times, could find the meaning that was hidden in plain sight. You must be initiated in Freemasonry to recognize it.

About 400 meters inside the Inambacan Cave in Antequera, Bohol, I with two other American companions found a writing in a mud bank. The writing was already overgrown by 13 inches stalagmites to indicate that it was already very ancient.

I researched about the writings and found a connection between the Phoenicians and Hebrews with the Eskaya of Bohol. My articles became the bases or proof that the Eskaya is an Ancient cultural community in Bohol. The Eskaya was ultimately recognized by President Fidel Ramos and granted ancestral lands of about 3,000 hectares.

The records of the Eskaya say that Sikatuna was one of their early chiefs. So we can connect Chief Sikatuna with the Eskaya.

According to the Late Juan Datahan, the Chieftain of the Eskaya when I was yet researching in the 1990s, the Eskaya has a basic “greeting sign or gesture”. (Note: In Masonry it is called a due guard.” The name of the gesture is “Ja”.

The “Ja” is like this, “Raise your left arm to the side with the upper arm horizontal, the forearm vertical, the palm facing the head, and the fingers curled and pointing towards the head. The right arm is placed horizontally across the breast.” This configuration according to the Eskaya alphabet represent the latter “A”.

Now, supposing Sikatuna will give the salute for the letter A and say “Ja” and say “Kaon or Kain”. What will be the interpretation of an ordinary viewer? Tuasanmalea, the Bornean interpreter said that Sikatuna wanted to eat. So Legazpi offered some food.

If you are an initiated Freemason you will not miss the challenge in the 2nd degree. But General Legazpi was not a Freemason, who was the Spaniard that recognized the challenge?

The answer is Fray Andres de Urdaneta. He was an apprentice of Sebastian del Cano and taught the secrets of the Knights of Christ, which was another form of Freemasonry. Maybe he renounced Freemasonry when he became a priest but still he will know the secret signs.

There are still plenty of statements, signs, and symbols that are found in the records but there is no more space to discuss them.

Francisco Dagohoy Day: Legacies of Dagohoy (Last of a series)

Proem According to R.A. No. 11444 known as Francisco Dagohoy Day law, we should extol the legacies and good deeds…