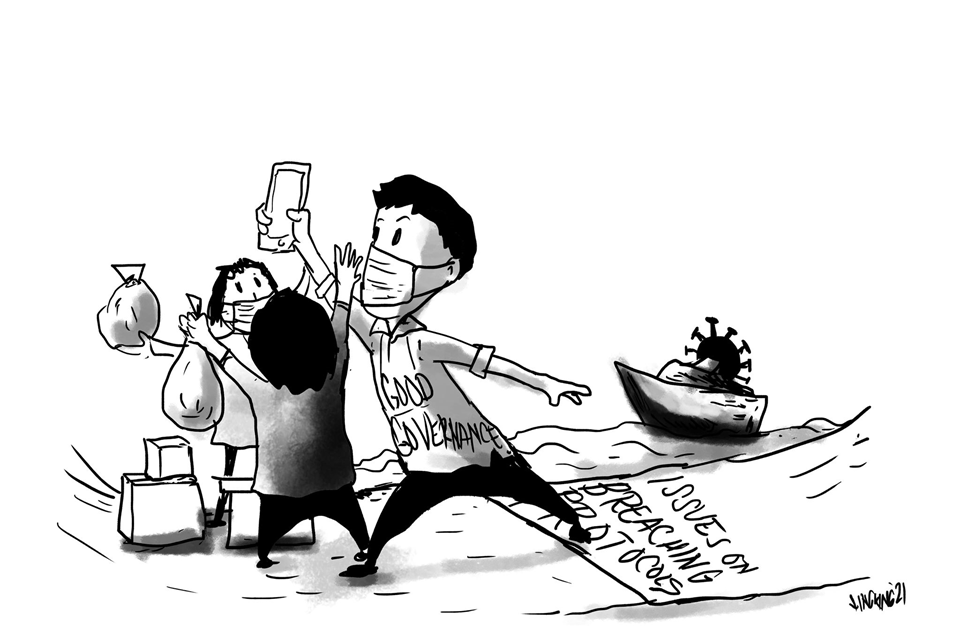 GOVERNANCE POLICIES ARE   are only as good as their effective implementation. Without that -policies are just pieces of trash paper- to wrap your fish at the marketplace.

The  recent “Delta Attack” has resulted in local policies allowing only Overseas Filipino Workers (OFWs) and Authorized Persons Outside Residence (APOR) to cross Bohol’s borders as the lockdown ensues till August 20. Will two weeks be enough to contain this virulent virus even as NCR reported a surge of 10,000 new cases yesterday?

To our minds, it is not the number of days but the resoluteness of political will that will determine whether pandemic governance policies become effective. What can you say of a containment system that lets a Boholano- Inabanga resident- (with positive Covid results) from Cebu slip to our dragnet like nobody’s business- and he still has the nerve to mock our systemic amnesia?

The chief architect of the Anti-Covid program (BIATF) has spoken no word to investigate and sanction the errant Inabanga resident even as his poor 54 co-passengers and crew are thrown into a mirthless 14-day quarantine. It is akin to BIATF and Bohol LGU head Governor Art Yap who treats with kid’s gloves the past blatant health protocol violations of two mayors, namely, Panglao’s Nila Montero and Garcia-Hernandez’s Tita Baja.

But of course, it is always leadership by example. One would be bereft of “moral ascendancy” to run after protocol-erring mayors when the governor himself has been documented endless times as going around public places sans health protection. He says people love him out there, but he is not above the law, nonetheless. One controversial example is the recent giving out by the governor of honorarium to BALAs aides (in person) but some in the form of a valueless souvenir replica.

Others tell the Governor straight that his activities are all works of “Epalism””- in which Google describes “Epal” as a Filipino slang for a “person who inappropriately presents himself in a situation.”

Sorsogon Governor and then-senator Chiz Escudero had supported the Anti-Epal Law that was vigorously pushed by the late senator Miriam Santiago, condemning such Epal acts as”allowing government officials to prematurely  campaign in aid of reelection all year-round while projecting an inflated sense of accomplishment to the constituents.” “Ouch”.

Each violator was to be slapped from P100,000 to P1-M in penalty and the same amount for a repeated violation with a “permanent disbarment from holding public office.”

Current ARTA (Anti-Red Tape Authority) Director Jeremiah Belgica recently cited No 82 of the Anti-Epal provision ordering that names and pictures of government officials should be removed from projects and items, especially now as elections approach.

Belgica says these names and pictures (and similar items) are “indirect advertisement in a way to make it appear that people owe them a favor” as if they were spending their personal money. In fact, most government projects are funded by people’s taxes. Double jeopardy- double”Ouch”, here.

Last week, the SP was known to have passed or recommended another P145-Million (again) in a new Supplemental Budget, of which less than 20% ( only for contact tracing and vaccination) are for pandemic response and the rest for other mundane concerns of governance.

A microcosm perhaps of what the provincial government views as urgent?

HARVEST OF OLYMPIC MEDALS, DESPITE

THE TOKYO OLYMPICS, fought under Covid -19 restrictions, resulted in a rich harvest of medals for the Philippines- (4) and eclipsed the previous record of 3 medals in the 1932 Olympics. Not just quantity, but quality as well.

The 1932 bag of medals were all three bronzes only- in boxing, high jump and track and field. This year – one gold, two silvers and a bronze medal.

All these magnificent achievements in the grim background of sports being not given the same financial and managerial attention by the Philippine government compared to our ASEAN neighbors. Our three congressmen Edgar Chatto, Aris Aumentado and  Alexie Tutor should look into this -in the forthcoming budgetary meeting for 2022 and should see to it that this malady is stopped.

They should compare sports budgets as a percentage of the national budget versus those of our ASEAN neighbors. Promising monetary rewards- only after they have won the medals- without supporting their sports training requirements is exploitative and less than humane.

The lack of training facilities and government support is evident even in this batch.

Covid-19 was not the only reason why Hidilyn Diaz and the company decided to stay for months in Malaysia together for training. And it was largely private money, we were told, that subsidized her Malaysia training. Non-support from the government was given the ultimate insult when Hidilyn won the gold, the first in 97 years for the nation.

In the last stages of the training, three of our four – boxer delegation stayed in Thailand for their final training? Why is that, Watson? Carlos Yulo, our 4’11 gymnast dynamo who had won international accolades prior to Tokyo is always training in Japan. Why, Watson? Sports Gymnast president Lizi Co admits as much on TV that funding is scant. Despite that, Yulo, but for a fraction of a point would have won another bronze in the vault final- the youngest among all competitors worldwide.

We do not lack talent but where is the support?  Pole vault jumper EJ Obiena spent all of his training months in Italy with a Brazilian record holder Tiago Brazda Silva (6.03 meters) and did not make it. He claimed he was homesick in Italy missing coconut milk and local food. Why do they have to go through this ordeal and expect them to win medals for us?

Even the monetary and non-monetary rewards  (after the medals were won)mostly came from the private sector and not from the government. In China and other nations, national athletes are housed and trained year-long. Something is wrong somewhere.

We, of course, celebrate the 4 additional medals which will now have a cumulative total of one gold, four silvers, and 4 bronze or 9 medals in 97 years. We are sure with adequate government support, we could have fared better.

Would our three congressmen please look into this before we dissipate our meager resources into useless dolomite beaches  (worth P398M including desilting) that get eroded at the first deluge of rain as in that found in Roxas Boulevard? It was meant to be a “tourist attraction” when the industry has frozen halt due to Covid-19. Give us a break.