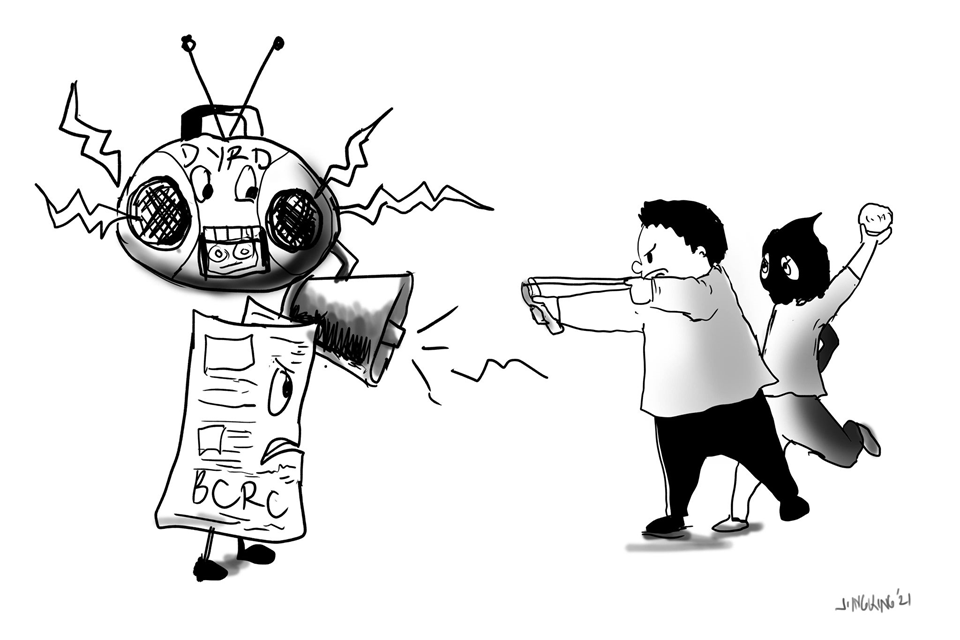 UNABLE TO DEFEND THE INDEFENSIBLE about Boholano citizens’ charges- in the legal and public opinion stages- the Capitol, led by perennially known onion-skinned Governor Art Yap,  and allies are trying to kill the messenger of the bad news. That is the DYRD- Bohol Chronicle twin media enterprises.

We are not ashamed of the fact that we are taking the cudgels of public service by reporting factual events perpetrated by accused scoundrels and graft men in government disguising as public servants. That a news person of our enterprise is a target of “character assassination” by Capitol, its paid trolls and revenue-fed associates are but a treasured “badge of courage” for us.

Because this means we are effective in exposing the shenanigans in local government-  by lighting the fire under their behinds and making them face their conscience before the public. Otherwise, if we lacked credibility- then we will have zero listeners on radio and no readers for our 67-year old newspaper. No one kicks a dead horse.

We have given these officials the public mirrors to see themselves for what they really are and they do not like what they see. Get rid of the mirror or reform themselves?

Getting rid of the mirror is easier- after all the status quo is lucrative and power is addictive. As the Fourth Estate, however,  mainstream media remains a watchdog of the Constitution and is, therefore, a vital part of our democracy. But our detractors want to “own” the liberty of the community to hear the truth and start by subduing the Press by discrediting its members.

But our people’s liberty depends on the freedom of the Press. Those who want to subdue the press want to usurp and own the liberty that rightfully belongs to the people. Do you want the DYRD-Bohol Chronicle to stop operating so that all you will hear are Capitol stage dramas, social media sycophants and bootlickers in the Press?

This is a democracy- and we all have the freedom of choice of who to believe. Choose your poison.

The first attempt at cajoling the press was to imply that one of our newsmen, Rey Tutas, of lesser education, had no right even as a Press Man to question the propriety of an act that bordered on “Epalism” in Loboc. We stand by the fact that a  man’s educational background cannot deprive him of a press badge any more than a poorly educated Manny Pacquiao cannot be voted as a senator of the republic.

Their elitist mentality as to who can have the right to “liberty and pursuit of happiness”  seems to limit such rights only to those who can afford higher education. Even our Constitution does not demand that a Philippine President should be a college graduate.

Consider Ellen Degeneres, without a college degree, is now one of the best TV anchors in media today with a net worth of $400M. Let’s look at the other non-college degree holders. Ted Turner with a net worth of $2.2-B established the Turner Broadcasting  Company and launched the first 24-cable News TV – CNN. Steve Jobs, founder of Apple who at his death already had $10.2B in capital.

A high school graduate is industrialist John Rockefeller, considered in terms of today’s dollar equivalent, to be the wealthiest man in the world at $340-B. He became a philanthropist and was never a thief. Enough of that education BS.

Propagandists of the Capitol are also weighing in on the style of interviewing of DYRD anchorman Tibbs Bullecer as strong and abrasive and cited the recent misunderstanding with the City PNP Lt. Col. Mary Crystal Peralta regarding border checkpoints of public vehicles. Bullecer was just carried away by the urgency of the moment -due to the Delta threat- and the issue was resolved and was later found out to be just a simple miscommunication within the City Hall hierarchy. The issue has been resolved.

The BCRC is proud to have the likes of Tibbs among us. A self-made man from humble beginnings, people might forget he has made a good accounting of himself- an engineer, a respected HNU alumni president, a food entrepreneur and a top-notch Kagawad and former vice mayor compared to some of his critics who had not even read page one on the “Rules of Parliamentary Procedures.”

So, ladies and gentlemen, as Capitol drowns in more and more issues,  we expect the more virulent will be their attacks on some of our people-  being perceived “critics of Capitol” -hoping that their “squid tactics” will create a black blot on the water so people would not see the accused crimes behind the Epal smiles of their kind.  Meanwhile, “Anti-Epal” Director-General of the ARTA (Anti-Red Tape Authority)) J. Belgica had called on you (people of Bohol, included) to send  Epal pictures and videos to his office which are violations of the Anti-Epal Provision enshrined in the 2021 National Budget Procedures.

And while at it, we are not wondering why the Governor attaches so much importance to his “superior” education by signing many of his directives as Governor with the title “Atty.” Arthur Yap. We have had many past governors in living memory who were lawyers but never used “Atty” before their names. There was Gov. Victor De la Serna, a bar top notcher; Gov. Rico Aumentado who was tapped by former Vice President the late Salvador “Doy” Laurel to head a Bohol branch for free Legal Assistance for worthy cases and certainly Edgar Chatto is a lawyer.

To a rich manor born, Gov. Yap, however, is not entitled to feel superior just because of his elitist educational background- to the point of feeling condescending and looking down on lesser mortals who he may feel have no right to question his public acts. God did not create the world that way.

MAYOR CALIPUSAN IS NOT “UNTOUCHABLE”

DESPERATE EFFORTS OF DESPERATE MEN are apparent in the vain but futile attempt to link the business interests of Loboc Mayor Leon Calipusan to BCRC President Peter Dejaresco – to hoodwink people into believing that the twin-media enterprise is protecting certain”sacred cows” like Calipusan. While Dejaresco’s family may have a travel agency, it is always in an arms-length business relationship with all floating restaurant operators in the Loboc area. Is this Media protecting Calipusan?

Records at the archives of the DYRD-BC show that we even sent a reporter and carried the news about the past raid done on the quarry operations related to Calipusan. In 2011, we featured the sound offs of the COA (Commission on Audit)regarding P38-M worth of questioned projects under the Calipusan mayoralty governance including the purchase of a Grandia van, Volvo Excavator, a trading center construction and expenses on Gender Equality.

During the post-earthquake controversy on the allocation of turns to operate the floating restaurants, we carried the story of allegations from an aggrieved party against Calipusan and his sister Mayor Helen Alaba sometime in 2013.

We do not believe in “sacred cows” even if their first name is Leon as Capitol and allies desperately clutch at straws to somehow link even a feeble connection between us to the Mayor and then discredit our Media. Try harder, gentlemen.

Instead, Capitol and its apologists may try to answer the new bombshell exploded by Calipusan over the radio this week about illegal quarry operations carried out by a contractor, which has been allegedly a favorite of a highly-placed official since many years back.

According to him, a Loboc police investigation team concluded that some 3,000 cubic meters of the quarry were reportedly illegally mined but only 150 cubic meters in equivalent pesos were deemed as penalty on the erring firm, according to the Loboc mayor. Further, he said that it is the Office of the BEMO (environmental management) under the Capitol that has jurisdiction to file such a case having themselves issued the mining permits and the ordinance governing such quarry operations, not the local LGU.

Lastly, Calipusan alleged that the land upon which the “illegal quarry” was undertaken is owned by the in-laws of Governor Yap, insinuating that it is quite impossible that the top provincial executive did not have prior knowledge of the  “illegal” operations.

That is a public expose’ made by a duly elected town official- certainly not invented by us- what is the answer to this new tirade from the Capitol and allies? It is a public concern, speak.