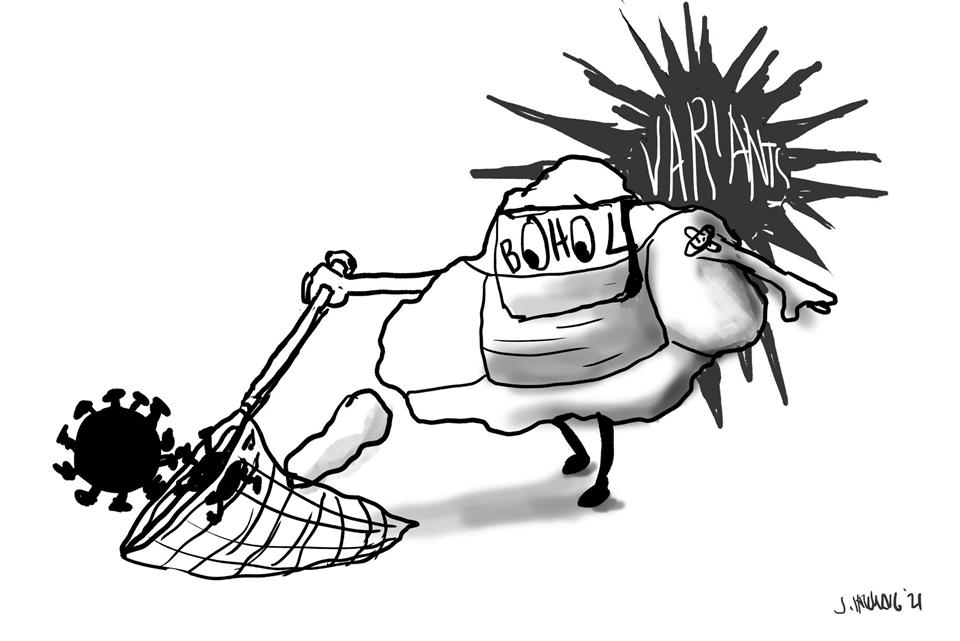 AFTER MORE THAN A YEAR  of fighting Covid-19, we have an idea of what does not work as well as we want them. Monitoring cases, deaths and recoveries; threatening people who don’t observe health protocols; and locking down economies are “non-sequiturs” that Covid containment will follow.

Vaccination toward “herd immunity” is a long-term solution, yes, but what do we do in the meantime?

If this was war, the sirens would have already wailed-telling all to rush into bomb shelters. We are on an emergency- Alert-4- the highest level of emergency when 70% of ICU and isolation beds are occupied, As of last week, only 8 of Covid ICU beds in 5 hospitals and 64 of 242 isolation beds are free.

So far, there are 11,344 confirmed cases with 242 deaths. Deaths in Bohol are computed at 2.1 which is higher than the national average of 1.2 but lower than the world average of 3.4.

It is small comfort since it takes too long for Delta variant cases to be detected here taking the circuitous routes to Cebu or Manila. What’s the real score when all tests are in? If we base the “nightmare” on what’s going on in Cebu, we dread the day we finally find out for ourselves.

The DOH, UP-NIH and Philippine Genome Center had confirmed these variants are already in Bohol (see separate article): Alpha, 8 Beta, 2 Delta Variants and P3 which accounts for most local transmissions. The Delta, of course, is the most terrifying in terms of transferability, number of killer germs and width of infection.

It accounts for most of the UK and India hits and USA CDC says is responsible for  80% of the current American cases. And is now showing vulnerability in children and those below 50.

Perhaps, we have to do something different strategically, in the interim, because the BIATF spokesperson Dr, Yul Lopez admits that given the rate of vaccination per month here (about 56,000) and the availability of vaccines, “herd immunity” is on a distant horizon of 2-3 years. Our local economy might not survive that.

Operationally, of course, due to our proximity to red-hot Cebu, stricter border controls are in immediate order. Barangay officials especially in the hinterlands must be actively involved in Imposing protocol compliance; many folks there wear no masks nor observe social distancing.

Strategically, however, two areas need glue-like focus: Enhancement of the health care system and tighter, scientific contact tracing mechanism. Since homes are not reliable in effectivity for quarantine (due to lack of outside supervision), then new modes of quarantine like schools, converting cargo container vans and new modular facilities like the one established in Tubigon (16-bed capacity) costing P 39-Million are needed.

The government should wave intensely the red flag to the DPWH to give Bohol its share of modular isolation facilities pronto. Since they are pre-fabricated, they can be set up in 45 days. ( If they can build hospitals in China in two weeks, this should be doable). Willpower, connections and the ability to bitch (pardon our French) aggressively about our situation to the national government are needed.

No namby-pamby requests will work. Because everyone is asking for the same things. And please, if we have the budget, prioritize the health care system, including food for those who will be quarantined thereat. There will be no tourism or agribusiness to talk about if we do not contain this medical monster first.

Secondly, there seems to be less detailed discussion on our capacity to Contact trace. Let’s be honest and call a spade a spade. We need a Contact-Tracing Czar like the Baguio City Mayor (Magalong) on the national level. The need is more than just medical acumen and good governance- this takes a detective, investigative mind that will devise a system to track potential carriers.

No need to reinvent the wheel -as there are successful countries in contact tracing (and they are just nearby): Vietnam, Taiwan, South Korea and far Japan. Let’s search their model and find out what is doable here. Pardon our being forward, but former NBI Director Dodong Mendez (also mayor of San Miguel) comes to our mind as a feasible candidate. He is excellent at tracking people and events and now has the benefit of the experience of being an LGU official. Seems to fit the bill or someone like him.

Our sense is as this virus evolves into virulent variants- we need to do something differently. Because we cannot do the same thing over and over again and expect different results. We need to inject new strategies, shall we?

OLYMPIANS WITH HEART OF GOLD

MARIA ANDREJCKYK, Of Poland, won the silver medal in the pole vault in the recent Tokyo Olympics. Upon returning home, she auctioned her silver medal for $190,000 in order to help defray the heart operation of an 8 -month old child Miloszek Malysa or else he will die.

A Polish convenience store magnate won the auction but asked Maria to keep the medal. The whole operation will cost $380,000 and so far $346,000 has been raised. Likely, the amount will be raised and Miloszek will have a new life.

Our own Hidilyn Diaz donated most of her P5-Million earnings in the Rio de Janeiro Olympics in 2016 when she won the silver in weightlifting. Of humble origins, Diaz still parted with much of her prize-money to buy a lot and build a gym for the young folks in her hometown in Zamboanga even though she herself was deprived of adequate training facilities and allowance en route to gold in Tokyo.

They are athlete-Olympians with a heart of gold who think of the country and others first before themselves. Such an inspiring breed of humans.

Later, it was President Noynoy Aquino who signed the law (RA 10699) mandating monetary rewards of P10M (gold) , P5M (silver) and P2.5M (bronze). Before that, we treated our Olympians like dirt. Shame on us.

Take the case of Mansueto “Onyok” Velasco who was robbed during the light-flyweight championship in the 1996 Atlanta Olympics. The biased (bribed?) judges gave the gold to Bulgarian Daniel Bujilov who punched little and should have instead been given the gold for “ballroom dancing” around the ring. For that’s all he did all night long.

The Atlanta Robbery was repeated when Congress, according to Onyok, failed to give him the P2.5M promised to him and the scholarships for his children. The poor guy had to become a bit comedian on TV and made a fool of himself- an Olympic medalist- just to make ends meet.

Is this the right way to treat our Olympians? Belatedly, he was given P500,000-an afterthought? Shame on us.

There is the 1998 Summer Olympics Bronze medalist in the featherweight boxing division (an idol of Velasco) Leopoldo Serrantes who was recently discovered languishing with pulmonary disease and hardly makes his daily bread. It took a private sector businessman (owner of Chooks to Go) to bail out the 59-year old boxer with an allowance of P100,000 per month for the rest of his life and a “roasted chicken outlet” (Chooks to Go store).

Meanwhile, fifty-three years ago ( 1968) our very own boxer Teogenes Peligrino of  Basdo, Guindulman town missed the  Olympic medal when he lost to Al Robinson of the USA (who eventually got the silver) and was an Asian Games athlete as well. He was “promised” P3.5M by then-president Marcos for his silver medal in the Asian Games and all he got so far is a certificate.

He turned professional boxer- and later settled to live as a fisherman in his hometown. A storm ripped his old fishing boat and Teogenes was left to fend for the family in most difficult circumstances.

After over half a century, he was finally given a new pump boat courtesy of the BFAR (Bureau of Fisheries and Aquatic Resources) as they were informed by Gov. Art Yap about his condition. Yet, Yap has been Congressman of the 3rd District (that includes Guindulman) for nine long years.

Didn’t anyone at least mention his name to authorities so he can at least be comforted in the twilight of his years since he had already brought honor to the town, province and country?

Are there still struggling Boholano Olympians in our midst (even for group events) who need some private and public sector assistance so they could be recognized for the honor they have given the country and people? Let’s announce their names here and on the radio and seek help for them (if needed).

That’s the least we can do for them.