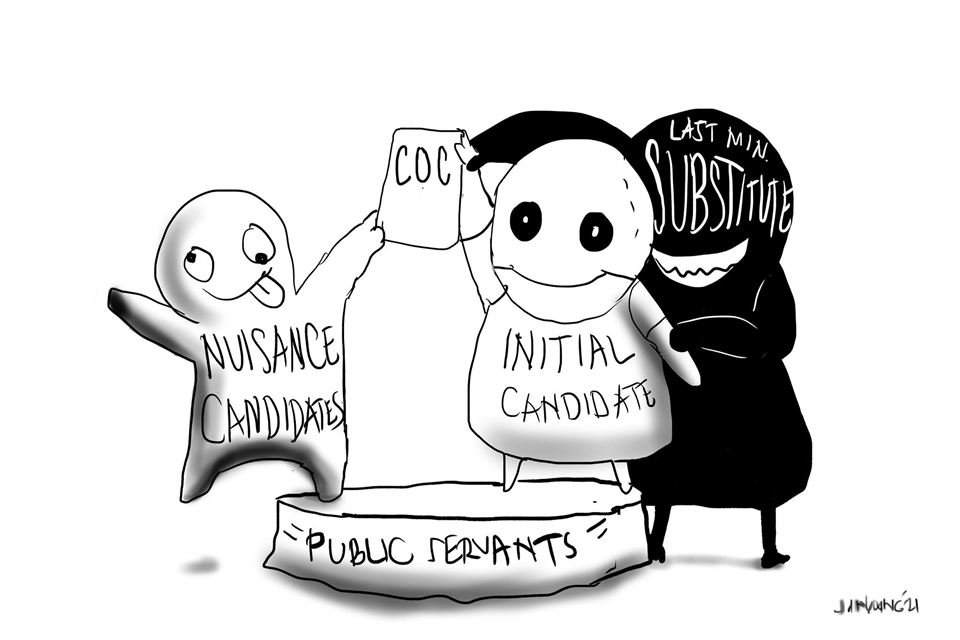 TO OUR CALIBRATED JUDGMENT,  our present Electoral System is weighed down badly by three things: the multi-party system, Substitution Rules and vote-buying as a Filipino way of life.

By 6 pm Friday, the nation, more or less, knew who applied to become to be our so-called “public servants” indicating the deadline for the filing of the Certificates of Candidacy for the May 2022 polls.

Well not exactly- as in the case of the presidency- where there were more than 100 applicants, including the mentally unstable and those unable to wage a nationwide campaign. Of course, the Comelec said this will be trimmed to just 6-8 presidential bets.

But worse than that, Comelec allows the substitution of candidates (under the same party) until November 15 indicating the “party” is not yet over (pun intended). To our minds, this particular ruling serves no positive purpose but to confuse the electorate and allows parties, instead, to carry out devious mechanisms that the public does not need.

We, of course, agree with the “involuntary substitution” rule till election day due to death, incapacity and late disqualification by the Comelec, there can still be a substitution. But we do not even agree 100 percent because why should they limit it to substitutes with the same surname when there could be equal or better candidates within the same party?

Mayor Digong Duterte, as you know, did the trick in 2016- playing coy and disinterested, only to file as a last-minute substitution and put all his presidential rivals into a quandary. It was a cute political trick but what service did it do to the good of democracy and deliberate representation?

Now, even if Davao City Mayor Sara Duterte may not genuinely want to be President or Vice, she is now being suspected to eventually replace senator Bato de la Rosa (PDP Laban presidential bet) or be with former senator Bongbong Marcos as a tandem. This is resulting from what happened in 2016.

But if any of the above becomes true- what purpose did it do except to confuse the electorate as to the intent and resoluteness of will of the candidates to serve the public? It did not confuse the Opposition as they were already extremely busy themselves- burning the midnight virtual candle to have a “Unified Front” which never depended on who the administration was putting up as bets? But just to be united, period.

If this titillated the Filipinos’ love for the uncertainty (“Abangan” syndrome) of soap operas on TV, politics is not  “That’s Entertainment” a’la German Moreno (bless his soul).

But “uncertainty”, in a sense, could currently be the “soul” of Philippine politics. Even surveys are, sometimes, of no consequence, especially on the national front. Survey leaders at the beginning like Manny Villar, Jojo Binay, Ramon Mitra, and Mar Roxas floundered in the end; to say nothing about VP Leni Robredo’s mere 1% survey rating in the beginning only to win the vice presidency with 14 million votes.

Look at the fact that the mere announcement of Robredo’s presidential bid suddenly changed the complexion among the opposition preference here as a recent survey showed Leni catapulting to 46% versus Manila Mayor Isko Moreno’s 22%, Senator Manny Pacquiao’s 10% and Senator Ping Lacson’s 4%. That’s how fast mood changes.

Our point is that the “clarity of choices” is not served well by the useless Law on Substitution except to add to a suspense novel which we do not need in these trying times.

We rest our case and let the future Comelec evaluate the strengths of our arguments.

As to the “Multi-Party” system, such an item was thought of by the framers of the 1987 Constitution to prevent any one political party to dominate any chamber of government. But its cure apparently became worse than the disease. It just led to the death of the good old two-party system made up of the Nacionalista and Liberal parties.

In its stead, we have cultivated a nation of a horde of butterflies (political) who shift allegiance almost immediately to that of the winning party of the elected president after elections. And resulted in what the 1987 Constitution wanted to precisely avoid: control of both Houses by the party of the incumbent administration.

This Multi-Party system also leads to some political instability. Because there were too many parties (candidates), presidents Noynoy Aquino and Duterte won only 40% of the votes- a win by plurality, not the majority. That means a bigger number (60%) did not vote for them in the polls. A two-party system would have insured, at the very least ( a win by 51% of the total votes) – a real mandate like that in the United States.

In some democracies in Europe which still have a multi-party system- they have resolved this lack of majority mandate for the president. At the end of the polls, if no one gets above 51% of the votes, a “run-off” (a one-on-one new election) between the two with the highest number of votes ensues until one of them at least has more than 50% of the voters’ endorsement.

It is expensive but ensures a more widespread mandate for the elected president. And offers for more political stability.

But now, you have a spectacle, for instance of a set of senators or kagawads under one-leader tandem but all of them with completely different political affiliations. Why do we allow this kind of nonsense when each party does not really have a markedly different platform compared to the others?

The final issue is the “crying shame” fact that almost nationwide, the province of Bohol is infamously known as ” one of the most expensive” places in the country to get elected into office to. Imagine, one voter can “harvest” some P8,000 from a bevy of vote-buyers of different persuasions?

To spread this moolah, parties must have a network of leaders to distribute them- and God Lord forgive them, but many people now, in the throes of hunger, sickness and death, and therefore the most vulnerable to accept this dirty silver – might sell their votes and make only the moneyed and not necessarily the “clean and the competent win”.

Massive vote-buying like these can reverse whatever trends the scientific poll surveys may exhibit. Is this the kind of democracy our heroes fought and died for?

What have we made ourselves become that just by knowing their vote-buying budgets, candidates can now calculate their winnability and even their rankings say in a Kagawad race? What a shame.

Has one ever put the math on- that if a candidate spends a theoretical P500M in an election foray, how much percentage should he partake in a multi-billion budget of projects – not only to reimburse his vote-buying expenses but also to prepare for the next polls as well if for reelection? Are we still surprise that charges of graft and corruption fly around like insects these days?

Will our civic groups, clean-minded citizens, the clergy, and the media not educate people where the candidates actually get these election”vote-buying” funds and whether these will eventually be deducted from the socio-economic services that people get and deserve as tax-paying citizens of this land?

Haven’t they heard of the saying that ” That the glory of saving a nation (province or town)  must not be given to those who contributed to its ruin?” Teachers, can you explain what this saying means to your students who look at you as not just as knowledge givers but moral arbiters of good and bad?

Shall we start thinking that after enjoying a few weeks of “prosperity” due to the P8,000 in dirty money, one will pay a loss of quality and quantity of government programs and projects resulting therefrom?

Once and for all, can this 2022 be the election year when our electorate will shed that ugly smear that Boholanos are “likened as slaves during the election- controlled by the whims of the highest bidder?”.

Let us develop a sharp conscience now that man does not live by bread alone but also by the Words that come from God.

That is, to be honest, yes,  you may take the money (that came from the taxes you paid) but vote according to your Christian conscience. Shalom!