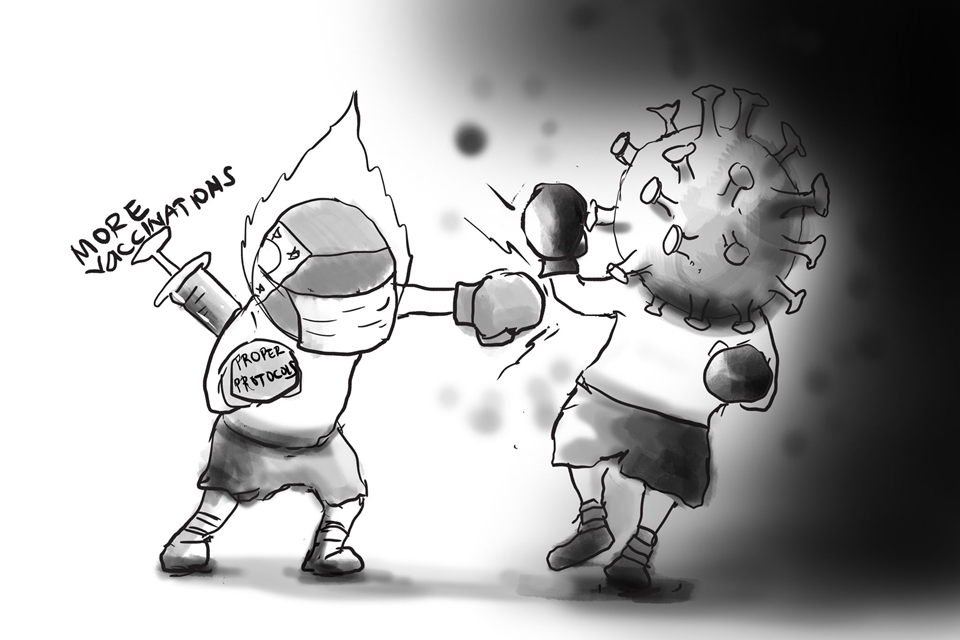 AT THE CURRENT STATE AT LEAST,  The Philippines seems to be winning the case vs. COvid-19.

Even with just 25 million of the vast 109 million populace fully vaccinated, the reported new cases in the nation were dropping to 1,000 a day only. If trends continue, we should have below 1,000 (triple-digit) reportage by end of November, per Health Authorities.

NCR, once an epicenter of the disease, has been upgraded to a lower Level 2 risk category beginning November 5. For the first time, one can sense a palpable sneeze of hope among the people after almost two dark years of quiet desperation.

Yet, despite these handsome statistics- uncalled for fear ( resulting in indecisiveness) seems to grip Governor Art Yap who is the head of the BIATF changing Executive Orders three times in about one week.

On October 23, EO 53 was issued requiring Bohol travelers to present a valid ID, the Spass and a Vaxcert from the government DOH portal that turned out to be exclusive only for OFWs. A competent government would have checked the site first and pronto seen if it functions well enough in order for people to carry out the EO directives.

Influential Cebu-based broadcaster with Boholano roots Leo Lastimosa hit Capitol for de facto encouraging Boholanos “to lie that they are OFWs”, the only ones entitled to get the VaxCert.

Then- another EO-53-A temporarily recognized the Vax Card as long as issued by a Bohol LGU, together with a DOH card and in lieu thereof – the RT-PCR tests, Another laughable EO since many of those incoming to Bohol were vaccinated outside the province.

Sensing the more liberal posturings of neighboring provinces particularly Cebu (Gov Gwendolyn Garcia) and  Negros Oriental (Roel Degamo) and the offer of Cong. Aris Aumenatdo for free RT-PCR tests for incoming Boholano from  Cebu, Gov. Yap issued another EO on October 29 accepting any Vax card signed by any LGU in the country and no longer requiring the RT-PCR tests.

Regarding the controversial Spass, the Governor used his alternative means of “consultative” decision making by asking the mayors to decide on the matter, Of the 28 who voted, 17 okayed the Spass and 11 did not. But one must recall that 20 other mayors were not able to vote on the subject.

On the slim vote of a mere 17 of the 48 mayors, the government will continue to press for the continued Spass requirement. The IATF, however, requires all mayors to vote on the Spass – so depending on the votes of those who had not yet voted will determine with finality the Spass status.

Or will PDRRM Bohol head Anthony Damalerio who was quoted as saying that the specific LGU will decide on the matter for its own respective constituents by stating a directive. This needs clarification.

Among the provincial leaders, Reps. Aris Aumentado and  Alexie Tutor sought the cancellation of the Spass requirement with only Rep. Edgar Chatto sustaining that SPass is a requirement of the IATF. Whether he is for it or against it, only Rep. Edgar knows in his heart.

Recently presidential spokesperson Harry Roque announced that the IATF  through Res No 146 had “approved” the use of VaxCert for “locals” and not just “OFWs”. Clearly, therefore, the original  Capitol EO 53 was made including one requirement that could not be carried out by the “Locals”. How does one describe such type of EO issuances, Watson?

Bohol has had 17% fully vaccinated people among its populace and some 238,105 vaccinated with the first dose and the second dose within a month bringing the Bohol total to about 34% vaccinated fully within 30 days,

Even Tagbilaran City has declared its achievement of “herd immunity”.

With that favorable conditions in store, we do not know why the provincial government seems to be quivering on its toes-  by its constant changing of EOs-as if fearing the entry of people will accelerate the virus surge again.

But when will they start igniting the frozen economy of Bohol when money velocity and volume require the entry and spending of more- not less-  by  more people,

And where is that heart that should beat in cadence with the heartfelt yearnings of Boholanos wanting to visit Bohol once again after nearly two years or so?

We need governance with both certainty and heart.

EVEN BEFORE THE CAMPAIGN PERIOD starts the presidential derby is smoldering like a volcano.

Perceived early leader Bongbong Marcos is facing a disqualification case for tax evasion conviction with finality at the Court of Appeals- effectively making him a convicted felon. Likewise, there was another charge sheet of allegedly falsifying his candidacy papers. The Supreme Court should decide on those early.

Perceived second-running Independent Leni Robredo seems to be gaining momentum with her Pink Crusade- led mostly by the ABC market. One is also well aware, though,- as Leni does- that 87% of the votes still come from the D and E market.

Manila Mayor Isko Moreno suffers from a lack of clear conviction- and seems undecided to play either black or white in the scheme of things. Senator Manny Pacquiao reportedly spent P2M in Panglao is his short sortie here- though Comelec says that is not vote-buying as the campaign period is not on.

Senator Ping Lacson is steady with his base among those who want a corrupt-free government and the rule of law and order. Senator Bato de la Rosa is a relative newcomer and will have to rely on the endorsement of the president and his faction of the PDP-Laban.

Everything as of now is still tentative and six months to go is an eternity in politics. Read the surveys well but be aware of who the survey firm is, the groups paying for the survey and the phrasing of the questions.

Do not be misled by false trend-setting gimmicks.