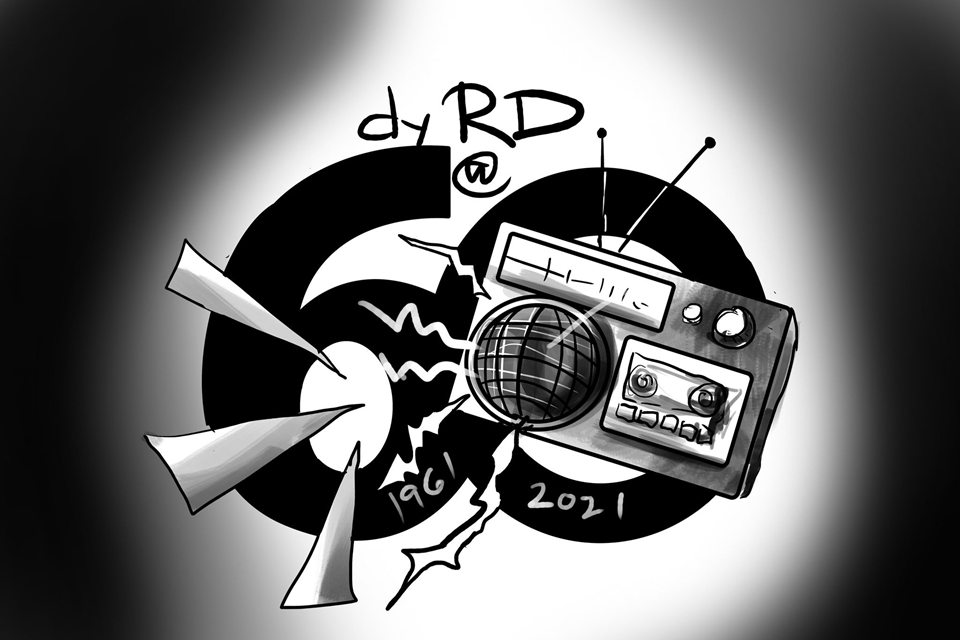 Station dyRD transformed Bohol’s public broadcasting history in October 1961 with its maiden broadcast as an AM station, the first-ever in Bohol.

Dyrd’s forerunner was the Wirecast Bohol Chronicle Broadcasting System (BCBS). Literally, the radio power was radiated through physical wires. The station started as the “most engaging music and news station. Later on, it added public service which saw the birth of the first “Inyong Alagad” program in the 1970s.

Dyrd absorbed many of the talents of BCBS which included broadcasters like Alan Vale and Nena Saniel. The station produced a crop of the best in English and Visayan broadcasting talents like newscasters Vic Balbido, Pepe Manalili, OscarCimagala and Al Damalerio. There was a heartthrob Along Peligrino who lorded over the “Yours for Asking Program” (a nighttime dedication program) like a rock star for many years and commentators like the distinguished lawyer Victoriano “Wil” Tirol and Pedy Bolanio who showed great longevity.

Then came the upbeat Djs of the younger generation like Boy Pernia, the Dejaresco brothers: Bingo, Bobong and Peter (eldest brother Ely was a top-notch newscaster who even for a time did a Cebu  “TV newscast” sponsored by an airline company.) There was James Era, Claro Alcordo, Gary Simpao and Rey Visarra etc.

On the female side, aside from Saniel, one can recall Eva Graciosa, Lina Gulle, Timi Bolatete Miriam Tinampay, Marjorie Evasco, the Darunday twins (Scrambola) and a host of many outstanding female voices.

Dyrd provided entertainment on Sundays which kept Boholanos glued to their radio sets or graced the Plaza Rizal or the Inting Street for the very popular and well-sponsored  “Dyrd Amateur Hour” and”Pasunding sa Kabataan”, respectively. The winners here later invaded Cebu and other music centers to try their luck for the higher stakes. Musical experts abounded, likewise, in the persons of Rolando Abeabe and Billy Ingles, among many others.

Dyrd was a hitmaking station whose choices of top foreign and local songs became household names from Eddie Peregrina to the Beatles, Elvie Presley, to the Chicago, Earth Wind and Fire, and the newer stars on Platterville.

The ‘Inyong Alagad’ program, on the other hand, evolved into a pure public service program where people in need came to the radio program to seek financial assistance especially for their medical needs, the station being right beside the Gov, Gallares Memorial Hospital.

From that format of public service, ‘Inyong Alagad” continued to evolve into a public affairs program where radio listeners find refuge for their plea for better government service. From worsening water service to big potholes in the streets or uncollected garbage, dyRD became the medium to call attention for good governance.

Station dyRD along with its sister newspaper The Bohol Chronicle has been at the vortex of controversies with their courageous stand when it came to issues of corruption. Of course friendships with valued relations, relatives and persons in authority had sometimes been broken when the station would not keep its silence in the face of thievery and injustice in public life.

The popularity of “Inyong ALagad” earned for it as one of the nominees as  “Most Outstanding Radio Programs in the Philippines” as picked by the Kapisanan ng mga Broadcasters ng P{ilipinas (KBP).

The program, later on, spun off to another public affairs program dubbed as”Tagbilaran-By- Nite.  The 7 o’clock news of veteran newscaster Fred Araneta has maintained its popularity among radio listeners to this day. The old familiar commercial of Eveready Battery in the late 60s haunts like a pleasant memory.

We now have currently a bevy of excellent anchors for public affairs like Tibbs Bullecer Jr., Chronicle senior writer Chito Visarra, Tonton Aniscal and Araneta himself. Araneta distinguishes himself by translating the Sunday Editorial of the Bohol Chronicle every Monday morning – expanding the editorial reach of the content to Visayan-speaking listeners. They were preceded by remarkable anchorpersons in the late Boy Guingguing, Ardy Batoy and Dandan Bantugan.

We are proud to have become some kind of university of sorts in practical journalism where Guingguing became publisher-editor of “The Sunday Post”, Batoy to “Bohol Tribune” and Bantugan as the publisher of the “Bohol Sunday News”. Whether they admit it or not- some dyRD blood still remains in their professional veins due to the time spent with dyRD.

The essence of the station’s value is being the source of fast and accurate news. In the past, the founder Jun Dejaresco found time and effort to maintain a parallel count of the Comelec at the home-cum-office garage of the election results of both national and local polls which were broadcast almost simultaneously with the official results with the added value of relevant annotation by reporters and anchors.

The value of dyRD shines brightest during natural calamities. When power cables tumbled from strong storms, transistor radios with batteries became the only link of the diaster-struck folks and the wide wild world. Through earthquakes, drought, floods and famine, dyRD transformed broadcasting into “humane” broadcasting by interviewing victims and rescuers alike – as to specific impacts in their lives- creating sensational “human interest” on the air story.

Dyrd was the umbilical cord that connected the Boholanos to the rest of the world.

Meantime, dyRD was one of the first radio stations in the country which went on global streaming way back in 2007.  To date, on Facebook, DYRD edifies as having a  huge following in social media through the “DYRD ang Kasaligan “Facebook account.

The station maintains its news and public affairs format, now reaching Boholanos all over the world.

As the station turned 60, the station management and staff did a twin activity in pandemic mode. “Plant-to-Bike ” brought some 200 bikers to a one-hectare lot in barangay Libertad, Catigbian town. The bikers, together with the entire staff of station DYRD went yesterday for the tree planting activity. Some 600 fruit-bearing trees were planted in the area as bikers, mostly listeners of DYRD, joined the station personnel for the tree planting activity.

It is the station’s contribution to the fight against Global Warming.

Its:”Mission is simple but heart-felt: Service is our motive with truth as our guide

The CORE VALUES of the corporation are enshrined as: trust in God in everything, independence and integrity, truthful, accurate, and public service above all.

Surviving 60 years of commercial broadcast amid traditional competition and the resurgence of social media lends us hope that journeying for the next 40 years to our centennial celebration will be a familiar task and with the Almighty’s Great Hands, breathe the same life and hope to every listener.

Thank you to our staff, listeners, advertisers and friends. You truly made the last 60 years worth our while.

“STRATEGIC” MOVES TO CONTAIN COVID 19 AFTER MORE THAN A YEAR  of fighting Covid-19, we have an idea of what does…