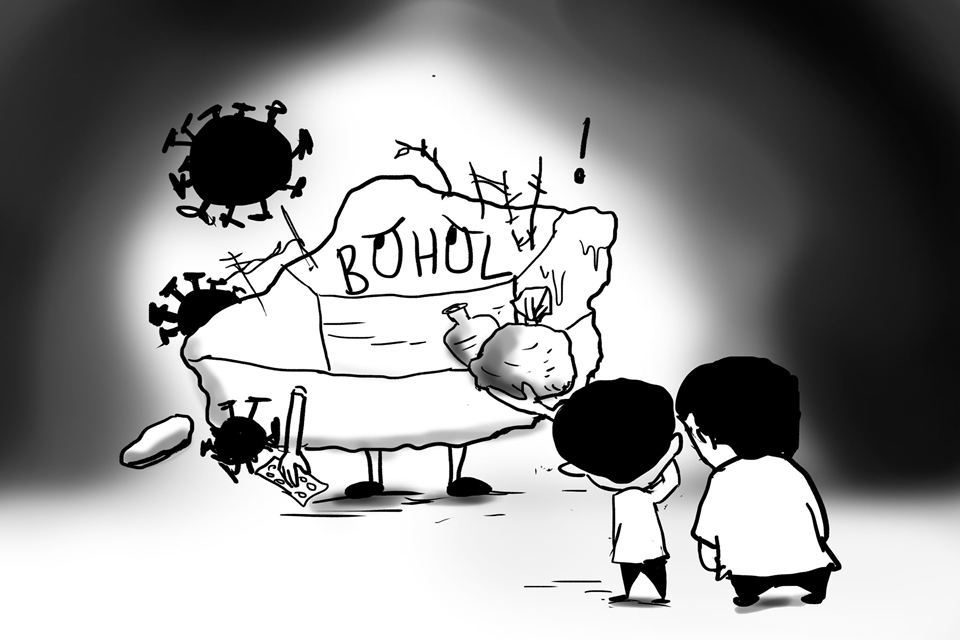 RATHER THAN SHOWING STRENGTH AND STATESMANSHIP, the recent acts of the two top leaders of Capitol betray deep-seated insecurity.

As we know- at least 5 provinces were severely hit by Typhoon Odette. Appearing like a cry baby whose playshop was destroyed greatly, Gov. Art Yap lamented publicly that the provincial government (in the ending fiscal year 2021) only had P50-M. We did not see any of the governors do that kind of MMK drama.

They had earlier pictured a “happy days are here again” in 2022 with the “Mandanas Ruling” and the biggest provincial budget ever in the history of Bohol- in an election year. But Nature had a way of whacking errant on the tail by sabotaging their plans. Boy, must they have been angered and frustrated at Mother Nature unleashed  Supertyphoon Odette.

“Whom the gods wish to destroy, they first make them mad.” No, we are not saying that.

With all the havoc Covid then and then Odette did, the province is in a state of destruction and despair (this is calling a spade a spade). Capitol, who claims to be the father figure of the province in good times, cannot  NOW escape that responsibility in bad times.

How does one look good amidst a disgusting environment? Well, budget P40.7M  for media and propaganda (a figure almost near the last P50M candy Yap was brandishing last December). Shocking but that is 10% of the provincial budget at a time of intense destruction. By end of 2022, check the usage of P40.7M and much of that will have been spent January-April (months before the election). Get the connection? Place a bet?

Capitol’s image has already been tattered – from 21% tongpats allegation of projects, the mysterious Ivan, Epalism and the cases filed by former city mayor Dan Lim, one set bordering on unbailable plunder. It is embarrassing enough not to be able to defend that well in Plaza Rizal, now are added the woeful economic losses from an already impoverished Boholanos from Odette and Covid.

On national media, Gov Yap had threatened the Palace that if no aid comes, riots and looting will follow- just to get his demands prioritized (no such thing happened as the intelligence community laughed). The Capitol reportedly already received P13.8M in donations and distributed food packs.

In a sudden turnabout, this week (see separate news),  Gov Yap says that getting food packs is not a “right” of every citizen. Not all will get food aid. Meaning, those who got – therefore-owe the provincial government one? No sir, they are donations elsewhere or the national government- not from the provincial government’s budget or the officials’ tender mercies. People should remember that.

Such insecurity to “look good” in the face of criticism and legal cases is, of course, in aid of reelection. But people are not as stupid as they think. What else did they do?

They gathered, likely at provincial government money (your taxes, gents), hundreds of their political wards at the plush Bellevue Hotel, to jumpstart their political campaign. Did cash change hands? Were you born yesterday?

Here’s one other catch. Down to the barangay leaders, they urged the attendees to boycott listening to DYRD, as according to Yap and VG Rene Relampagos, the station is peddling lies. (DYRD to the Capitol is what the crucifix is to Dracula?) Lies?

That the station received news that Yap instructed its minions to wait for his “blessed” presence before distributing the 8-kilo rice- amidst the worst pandemic before typhoon Odette? Capitol’s worst nightmare then happened in Loon recently.

Tired of being treated like robots perhaps- three Loon barangay captains refused to be blind followers and disobeyed Capitol’s orders for them to wait for Yap (four days after receiving the relief goods on January 23). Why wait for the king to come for FB opportunities when the commoners are dying from hunger?

This is the kind of news that lands on DYRD airwaves that the Capitol hates to hear. So, what?

Does one want deodorized news and favorable half-truths peddled on the air?  Well- listen to FM stations 911 and 92.7radio programs flooded with Capitol-paid programs and some low-power radio stations in Ubay, Jagna and Talibon.

Is the budget for this biased broadcasting (paid by the peoples’ taxes) out to tell the unblemished truth? Or discredit DYRD so people will boycott DYRD. This is a free country. Go ahead, make our day.

The kind of news one will get from them anyway is the stuff that Capitol’s No 1 propagandist (Kevin Damalerio) spews out. So badly and maliciously saying, in fact, that the town of Ubay (Yap’s opponent Rep Aris hails from) was not distributing food packs sent by the provincial government and that there were unedible wet sacks of rice rotting undistributed.

The one was a blatant lie and the second came from donations from other provinces (and owned by a private trader) which got wet while being disembarked from Loay due to strong rain and turbulent sea waves. Thus, Damalerio has been declared “persona non grata” of Ubay by the town SP.

We likewise found out that the Ubay folks were the most deeply affected by Odette. But allegedly due to sly maneuvers by  Yap, according to Ubay Mayor Contant Reyes, President Rodrigo Duterte diverted his visit to Inabanga instead of Ubay as the governor reportedly duped the president that Inabanga suffered more than Ubay. Fact check that lie, Watson.

The political undertone is that Inabanga is lorded over by the Jumamoys, Aumentado’s political foe. More lies and deception.

Everyone knows now about the Omicron variant victims (2) who entered Bohol. Paid hacks from Capitol in media tried to distort the news and tried to paint DYRD as the bearer of “fake news”. All we did was to take the cue from media freedom crusader Maria Ressa (Nobel Peace Prize winner): “we must fight lies with the truth”. And the truth was in the form of a taped interview with DOH Region 7 spokesperson Dr. Mary Jane Loreche who stood by the veracity of the dyRD news.

Why would media mainstream media frontrunners like DYRD and the Bohol Chronicle feast on fake sensational news when we have nothing else to prove after 67 years of community journalism? It is insects like a Capitol-sounding troll “The Bohol Monitor” that need to call attention to itself to create followership. But we already know the guys behind this facade- and their day will come.

In a way, we pity the Capitol leadership for being allergic to criticism. Because- this will not end even way beyond the elections because Boholanos are no longer the cowards they were made to believe they were. Add a few million to the P40.7 media and propaganda budget- that will not mean earbuds will automatically appear in the citizens’ ears so as not to hear the ugly truths about Capitol.

Belittling mainstream media may be Capitol’s attempt to elevate their own faltering status.

The desperation to always look good is a defense against actually looking bad now.

Being secretive and suspicious is shown in being stingy with information and facts.

The aim is to disempower people by withholding knowledge from them.

Ask any psychologist. These are clear signs of insecure leadership.