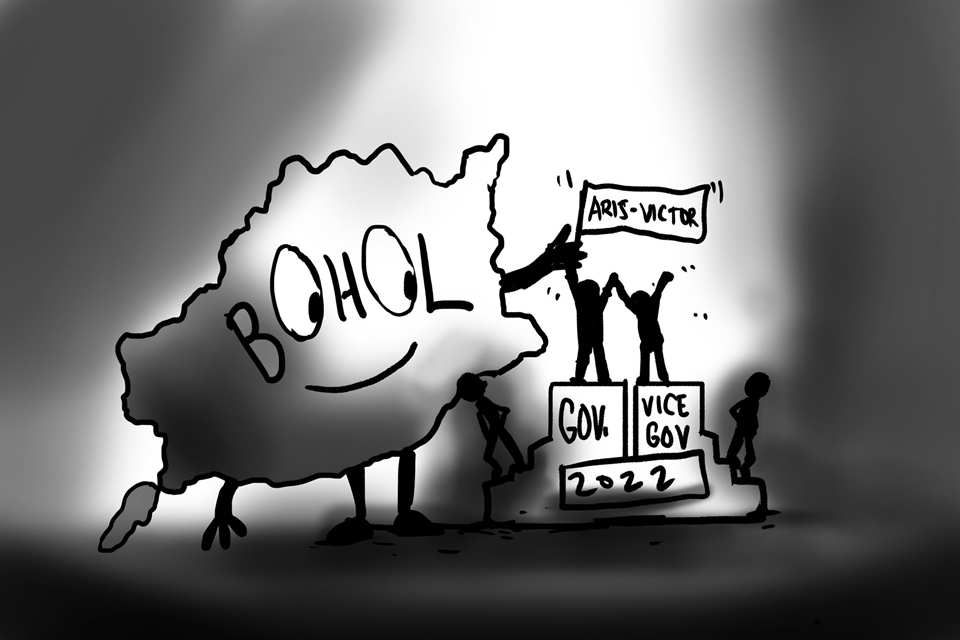 ONE OF THE REALITIES OF LIFE is that in many things there is always a winner and a loser. They are always two sides to one coin. And we cannot win them all.

The last provincial polls reminded us of the “Battle of Waterloo”- wherein a proud French general Napoleon Bonaparte with 70,000 men was crushed in the fields of Belgium in 1815 by a combined force of the European nations.

Depressed after the war in exile, Napoleon contemplated how impregnable he once thought he was -as a Rock of Gibraltar- and this hubris made him fail to fully appreciate the elements of that warfare.

It was a crushing defeat- and as narcissistic as he was, Napoleon was first in denial and then accepted finally that it was his fate to lose after so many victories.

Such was the lopsidedness of the provincial elections -about 400,000 Boholanos did not vote for Gov. Art Yap and 362,000 for VG Rene Relampagos while the Sangguniang Panlungsod who was ruled like a fiefdom by the tandem was no longer theirs in a dominant way.

Months before that, the Yap-Relampagos duo seemed unbeatable until the last few weeks when public opinion decisively swung opposite their direction making the erstwhile unbeaten Yap say that “he was prepared to lose”. No cemented walls could have prevented the tsunami of public disgust that swept their party close to smithereens.

If it was a boxing match, it was not just a unanimous decision, much less a split one-but a clear “knockout” win- underscoring who had the superior mandate. Arms up asunder in surrender  Yap vowed to end his involvement with local politics (perhaps eyeing a national one?) while VG Relampagos sulked and said they lost due to “fake news and deceit”.

Given the administration’s multi-million media and PR budget, control of various media outlets and scores of well-paid trolls, it is funny how the finger of “disinformation” could be directed at the opposition- political and non-political. Perhaps with that one finger towards the opposition, three fingers (of the same hand) were really actually pointing back at them.

In losing, it would have been more statesman-like to shake hands, accept defeat and learn lessons from one’s defeat (we learn more from them than from our victories) and be wiser not to commit the same mistakes if and when the occasion once again beckons-  in order to achieve one’s goals. Then, in this case, with apologies to the author-  it would have been – “for every tear- a victory”.

Calling others names amid so much obvious demolition may be seen as a mere political “sour-grapes.” Sour grapes only taste well only when wine and cheese are taken with them.

So, at daybreak on the day after the election, not too many could scarcely believe witnessing the biggest losing margin ever in the history of Bohol politics. Incumbent Gov. Art Yap pooled 283,903 votes while challenger Rep. Aris Aumentado garnered an overwhelming 469,736 votes or a lead over a sitting governor of 185,833 votes.

Some of the possible reasons why the devastating loss:

(A)” less consultative type of governance.” The provincial leadership was aloof. To start with, Yap who is not a Boholano (by blood) was surounded by non-Boholanos within his inner circle led by Provincial Administrator Kat Pioquinto. Their banner campaign party called as “Padayon Bol-anon” came as a “lame” Battlecry since the electorates viewed the sitting governor as a non-Boholano.

(B)”distant from the people”. Gov Yap cut the traditional talk regular with the people which was institutionalized by previous governors such as “Kita ug ang Gobernador”. Yes, he was active with his social media account. But it was deemed all self-serving and a one-way communication as his daily posts was all of his activities that were mostly not responsive to what the people wanted.

(C) ” Icon of EPAL”. The outgoing governor was seen all over on his tarpaulins and even at the specially printed wrapper of sardines given to typhoon victims. In fact, one of his biggest issues was his marching orders that distribution of relief goods can only be done once he arrives at the site for FB posting. That exposed some sort of gross insincerity. People dislike that of leaders.

(D) ” perceived massive corruption”. Though the plunder complaint filed by former Mayor Dan Lim against Gov. Yap is still pending at the Ombudsman, the majority of  Boholano businessmen and the ordinary street cleaner have heard of the outrageous ” tong” collection led by that mysterious Mr. Ivan and a certain Erwin Sy, both non-Boholanos who were suspected to be members of the team brought by the governor to Bohol.  Anyone doing business with the Capitol would attest there was a mandated giving of no less than 18% commission to the assigned bagman who had started to come out in the open after the May 9 elections.

(E) “absence of a crisis manager”.   The pandemic and the onslaught of typhoon Odette gave the people a clear view on whether Bohol had a good leader or not. Events will tell how the Boholanos suffered from a mismanaged operation during a major calamity. The public noticed that the meetings of the town mayors called by the Capitol would end without any categorical direction from the provincial leadership. Instead of definitive and expected marching orders, the mayors were left to do things at their own discretion. There was no captain manning the ship, so to speak

(F) ” no fiscalizer”. Despite the glaring lapses of the Yap administration, no one in the corridors of power was brave enough to tell the governor what went wrong along the way. One would expect much from VG Rene Relampagos being a longtime, experienced public servant. Alas, all he did was virtually defend the governor in all fora instead of telling him honestly of his lapses (that, at times, the emperor actually wore no clothes). He could have done a great service to Bohol, himself and even the governor himself by citing the blind spots that Gov. Yap had and there were many.

Or was it just simply, perhaps, a case of being “unable to defend an indefensible position”?

(The so-called triumvirate -troika- of Yap, Relampagos and Rep. Edgar Chatto fell deaf to the clamor of the public.  Luckily for him- Chatto did not have a truly strong opponent in the last election and thus remained a survivor of a political blitzkrieg. Woefully, the Sangguniang Panlalawigan was also practically a “rubber stamp” of the executive branch.- and thus faced the same just electoral recompense.)

Oftentimes, sitting above one’s imperial throne and not really living amidst the squalor and the misery of the  Boholano Everyman makes a ruler blind to reality and by merely listening to whispers of biased Rasputins who speak only words the ruler wants to hear- even though- oftentimes unrelated to the common good, was a formula for disaster.

So, one day, such an emperor falls from his throne. And so, it has been.