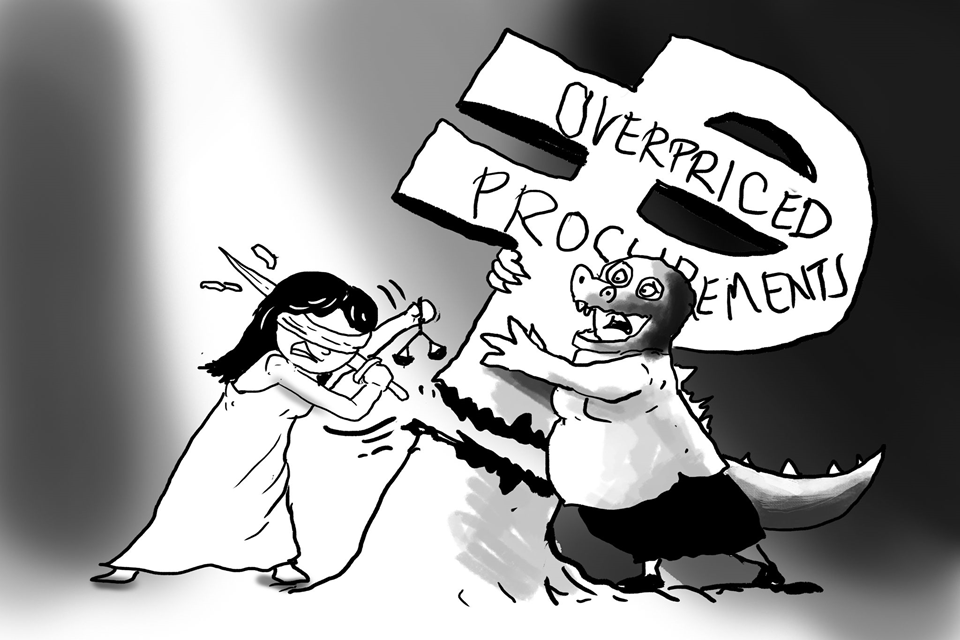 IT WOULD SAVE THE GOVERNMENT Billions of pesos and the Senate Blue Ribbon Committee countless hours if this government just dissolves the inutile entity called PS-DBM (Purchasing Services of the Department of Budget and Management).

It was created to buy the common-use materials of government like paper, pens, folders, computers etc. Good in intention but the crooks in that department had mocked that by becoming magicians in identifying various “specifications” to justify their over-price from the norm. Even if the “altered specifications” did not materially affect the minimum acceptable effectiveness of the original targeted items.

For instance, the P2.4 Billion worth of laptops bought at P58,000 each could be had for P20,000 and this higher price resulted in the dilution of the number of laptops bought by the Government and , therefore, denying access to those by some 30,000 teachers at the Department of Education. That price is almost akin to a superior Macbook.

Then a silly argument was posted by PS-DBM undersecretary Alain Pascua that he went by the pricing because it was approved as “in order” by ICTS, a completely separate agency of government from the DBM. That’s not a skirt Alain can hide under.

Caught with fish inside their mouths were the PS-DBM officers as they were reminded that between the dates of the purchase of the P2.4-Billion laptops (at P58,000), the DBM itself as an agency had bought for their own use P45,000 each cost of laptops for their own use. Is the difference between the two what would perhaps represent part of the “tongpats” or the “bukol” words that became bywords in the GMA administration? They’re putting it back in style?

Last year, the same PS-DBM was caught purchasing Covid-19 -related materials such as face masks, PPEs etc. that were obviously overpriced, 90% of that time from one supplier at times (Pharmally) and even ordered some items even before a Purchase Order can be made.  That was worth P42-Billion and the head of agency Christoper Lao is scot-free?

Add that to the P10-Billion expired vaccines from the Department of Health and see how these heartless crooks and inefficient bureaucrats had shamelessly mishandled the pandemic woes of our country.

But the Pharmally imbroglio and laptop scandal are just two that have been known to be publicly flagged by the Commission on Audit. How many more skeletons involving the PS-DBM will soon be uncovered? Just blow that agency with dynamite ASAP, is just one sound suggestion.

Let’s not wait for any more bombshells to explode and close pronto the sub-agency of DBM and make all government agencies accountable for all their purchases including having their own “Bids and Awards Committees”.

And most importantly, file charges, please. Dili man na mahimo nga sulti lang ug “sorry po, we overlooked.” They stole from the national budget- and that is people’s money. Conviction and jail terms are appropriate.

POPE FRANCIS IS  not the First Pope to underscore the vital need for laymen to participate in Christian evangelization. But he is the one pope who repeated that anthem time and again.

Evangelization done by laypeople has gone far and wide in this island province.  2022, however, is a landmark year for two Catholic renewal movements as they both turn 30 years into their mission work in spreading God’s words in this part of the globe.

Landmark, because it was in 1992 which is acknowledged as God’s “appointed time” to plant the seed of the renewal movements run by the lay people amidst a growing spread of other religions, materialism and moral relativism.

The Couples for Christ (CFC) and the Brotherhood of Christian Businessmen (BCBP) celebrate their 30th anniversary this August 2022. And, of course, no one person arranged that other Catholic renewal movements will plant their roots in the same month and year, 30 years ago.   The two communities were welcomed by the Diocese of Tagbilaran and the Diocese of Talibon in that year.

It is a fact – not being debated- that with that evangelization thrust, it was never the same again after thousands of individuals started to experience a “divine touch” by the outpouring of the  Holy Spirit which kept the fire burning over the past 30 years.

The Couples For Christ (CFC) is moving swiftly in its parish-based evangelization program composed of 12,000 strong men and women in the province. The CFC evolved into two groups: the CFC Global Mission Foundation, Inc. under its provincial director, businessman Amit Yu and the Missionary Families of Christ under Dr. Kit Balane as provincial director. It is a very rare occurrence that there are no CFC members to be found in any parish.

On the other hand, the  Brotherhood of Christian Businessmen and Professionals (BCBP) has crossed the seas as the Bohol chapter opened outreaches in business centers like Dumaguete City, Dipolog City  and Camiguin Island while it now has chapters and outreaches in the bustling towns of Ubay, Talibon, Jagna and Carmen.

Since its target market is the business milieu types, BCBP continues to shower the dryness of one’s spiritual heart in their weekly Breakfast Fellowship.  BCBP-Tagbilaran now has four Tagbilaran City chapters under Dr. Jojo Maniwan as area manager and businessman Steven Lim as regional council director.

These two Catholic renewal communities are gloriously celebrating their 30th year of evangelization program in the province as BCBP banners this year’s  theme as “Shout for Joy” while CFC shines aglow with a “Radical Love at the Heart of Every Family.”

For sure, our dear bishops, Bishop Abet Uy and Bishop Dan Parcon are both in jubilation in celebrating 30 years of lay evangelization of these two great communities in their pasture.