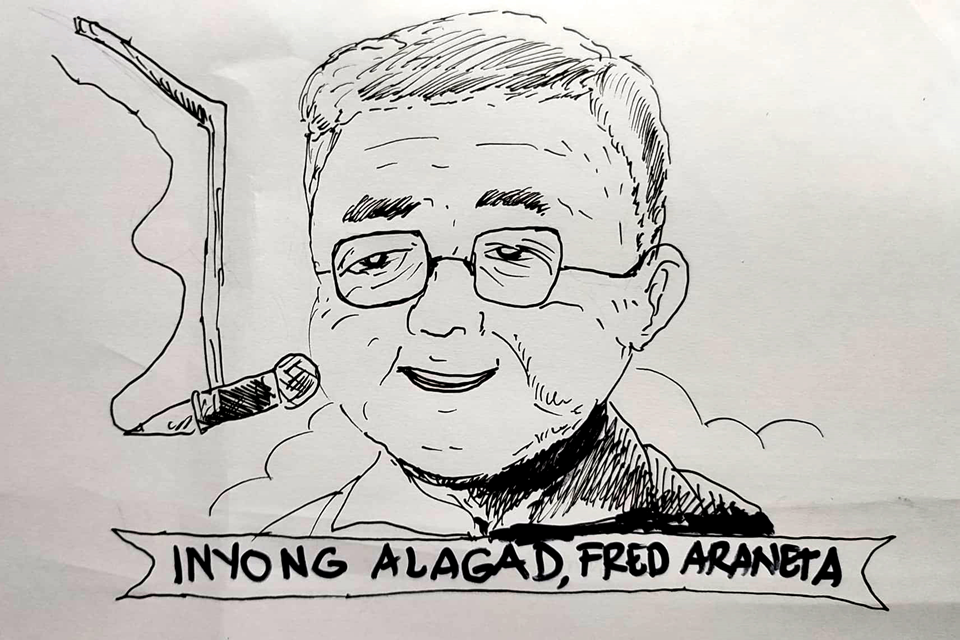 IT WAS AS IF A PALL OF GLOOM descended upon Bohol early morning of Monday, September 12, when news about the sudden death of eminent broadcaster Teodofredo “Fred Araneta” hit the fan.

Bohol lost a legend. Bohol lost an icon. A legend in radio broadcasting then- and in the years to come.

The deepening twilight of his life failed to dampen this man’s enthusiasm for his craft by taking on lesser acknowledged chores just to keep his heart nearer to the cacophony of news bytes and public commentary. He “died with his boots on” as BCRC Chair Peter Dejaresco eulogized in a Funeraria Gomez mass sponsored by the corporation.

“Fred” or “Nong Fred”, as he is fondly called was a loyal soldier to the end serving DYRD he loved so dearly for 49 years- short of half a century of the best years of his life. Against all odds, Araneta was a BCRC defender and that of press freedom. Thus, he was the longtime president of the Bohol Tri-Media Association, a recognition of his elderly statesman demeanor.

He was one of the ultimate anchor men of “Inyong Alagad” a KBP Nominee for “best radio program” where he was Mr. Cool, keeping his steadfast reasoning and calming disposition amid the raging emotions of conflicting thoughts.

Thus, he only had a few detractors but thousands of friends and fans.

Fred was humble and it was not beneath him to tutor the greenhorns of the DYRD stable into the basics and then the labyrinths of the business- without being threatened they could surpass his own. Because he was a man for others-  thinking his radio program afforded people the chance to air their problems and find their solutions. So, he trained others to be like him- all trying to be but not quite. He was one of a kind.

For years, he was the voice that opened and ended “The 7 O’clock News”. When he left for his annual sojourns to the US to join his daughters, people missed him as they do of their old pillows back home while they were growing up.

Fred grew on the job but the tremendous growth never came to his head.

The Dejaresco siblings- all nine of us- came home to have a board meeting the other week- after about 5 years pestered by the thing they called Covid-19. It was not coincidental that while bonding together as a family, we were still able to say goodbye to one we also consider our own- Mr. Fred Araneta.

Fred was responsible for getting this English editorial to reach the broader masses by translating it every Monday morning into the dialect. Mind you, translating it straight from the English original to perfect, hugging and pertinent Visayan words, still. That is why he was “Boy Wonder”- right from the start and to the end.

Fred had his taste as a public servant when he got elected as town kagawad of Dauis. He completed his three terms as municipal lawmaker  in 1980-1992 with his exemplary performance in his crusade for good governance.  He tried his luck for vice mayor but did not want to buy votes, an advocacy he knew DYRD was always championing for.  A principled man anchoring the multi-awarded DYRD “Inyong Alagad”radio program, which was a nominee as  one of  the country’s “Best RP Public Service” radio programs.

Flying back to Manila, a black and yellow spotted butterfly hovered for long minutes over us at the Panglao airport terminal.  That could be no one else but our good ole Fredo. We felt a sense of joy and ease about the butterfly.

But so it goes. With the demise of Mr. Fred Araneta (and we pronounce that name with a genuine sense of reverence), an era of Bohol broadcasting has come to an end.

And so it goes. “Kini si Fred Araneta”– that distinct voice fading, but not dying in our souls.