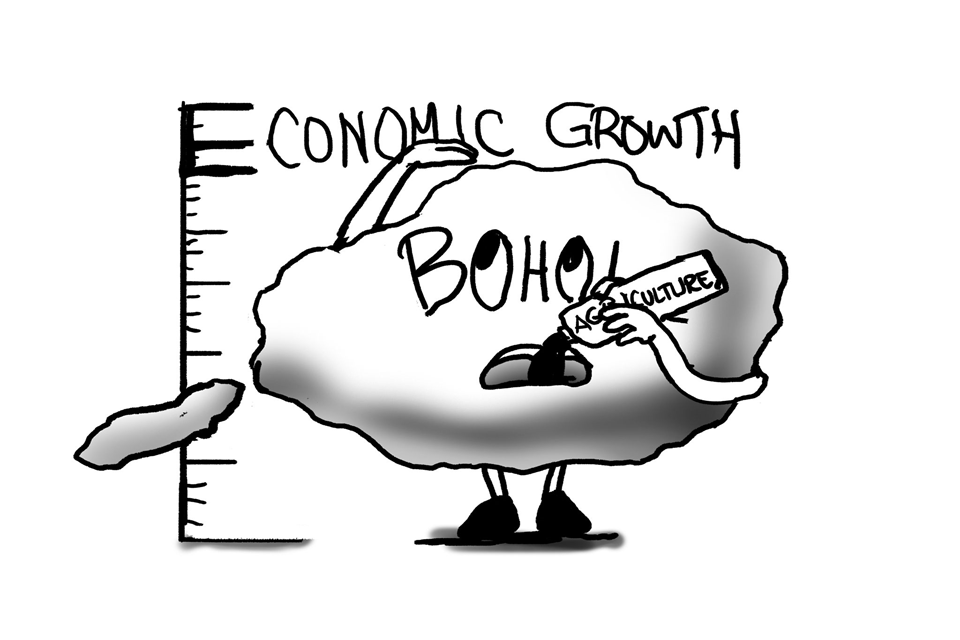 FOR INCLUSIVE ECONOMIC GROWTH to include the poorer sectors in Bohol, not only the Tourism sector must be injected with vim, vigor and vitality, but Agriculture as well.

The simple mathematics is that most of our people are farmers and fisherfolk.

Let us not forget Bohol is the nation’s 10th-largest island (4,821 square kilometers) where 45% is devoted to Agriculture. It is not, however, a productive type of agriculture where the average farm is less than half a hectare. It takes 10 to 15 hectares of rice to get mechanized and, thus, make a farmer rich.

Financing is not enough nor sustained and inputs like fertilizers remain costly (even before the Russian-Ukraine war). Yet we need to develop Agriculture because no less than 300,00 people depend on – for one, the rice industry.

With the Rice Tarrification law, the Philippines became the world’s largest importer of rice placing poor Filipino rice farmers to fend for their frigging selves. Of the over 70,000 hectares devoted to rice here -only 56% is irrigated despite the presence of huge dams. Small impounding dams are the answer- who will provide them?

Typhoon Odette mercilessly destroyed the crops, seaweeds, and fishnets in Bohol in December last year prompting then Agriculture Secretary William Dar to promise P1-Billion to rehabilitate Bohol agriculture. Some 52,000 Bohol rice farmers already received direct aid of P257M and another such amount soon be for other registered farmers for a total of P500M.

Some of the allocations for corn rehabilitation, however, seemed misappropriated. Recall that a significant portion of the 1.3 million Boholanos (16% of them) or 208,000 people are corn eaters, not to mention the demand for corn as part of the feeds to livestock and poultry. Corn is important.

Some Houdini masters of the past administration, however, apparently still took advantage of the corn rehabilitation program of the DA by forcing the purchase of P27million worth of corn seeds which is the equivalent of planting over 7,000 hectares when a conscientious agri-technician could only honestly justify the plantation over 2,000- 3,000 hectares here.

This is because of the 25,000 hectares of previously called corn land, only 3,000 was ready for planting as the others lacked land preparation and farm equipment to till the land. The Aumentado administration blew the lid over the crooked trickery involved in the calculation and refused to pay the supplier of the bags of corn seedlings not only because they were more than was needed but were also of poor quality that lacked moisture and according to some farmers, did not allow to corn to grow even one inch after planting.

How many more agri-based hocus-pocus will be un-earthed in the next few weeks?

In retrospect, the whole national  Agriculture industry has been a monumental failure for decades contributing only about 10% of the GDP compared to Services and Industries. It seems our competent agri scientists are leaving for abroad and the remaining ones are largely incompetent or corrupt and sadly, both. Not all, of course.

The presence of voracious, greedy cartels in the sugar, onions and other agricultural products is so pervasive that the president himself has lodged himself temporarily as a de facto Agriculture Secretary. Of course, this malodorous situation should not last forever or the whole country will suffer, consequentially.

We need a scientist at the top with strong police powers as Agriculture Secretary with no business connections here or abroad, that’s what.

THE COCONUT INDUSTRY AND OTHER FOOD SECTORS

SOME 1,284 HECTARES or 47%Of the total productive land in Bohol is planted with coconuts during good times. Coconut, a miracle tree with multi-uses of its parts is undeveloped in the country including Bohol.

Now is the time for the Provincial Government to make representation with the officers behind the Coconut Farmers and Industry Development Plan who have been tasked by a law passed last June 2, 2022, by President Digong to give back money to the real owners of the Coconut Levy Funds (small coconut farmers) now operated under a Trust Fund.

This is an opportune time as the international market seems to be recovering with Philippine coconut exports registering US$2-B in exports in 2021, up by 78% from the previous year. This greatly benefitted the farmers in the Davao region, Zamboanga Peninsula and Northern Mindanao. What are they exporting? Can Bohol do the same?

One other unique product to further develop is the ubi “kinampay” variety which Bohol grows and has few equals in aroma and taste in the country. That explains the superlative reviews food gurus do on the Bohol ubi jam. In the ’80s this violet wonder was hard to secure as all of Bohol’s output was reportedly cornered in advance by a popular ice cream maker. Our ubi is that good, let’s not be shy about it.

Finally, the banana is also one of those plantations that were singled out by the DA and is subject to its rehabilitation post-Odette. Some Boholano planters had already, in fact, accessed banana plantlets from DA for replanting for free. More should pursue this- since the banana has a very strong domestic market.

But of course, the much-discussed “Isda” and its prohibitive prices when compared to postwar, any fish variety was affordable to most Filipinos. The present administration has found evidence that indeed there is a Fish Cartel as shown by the price movements whenever the government intervened in the purchase and sale of fish. (See separate article).

Government must break this monopoly that sets the prices and control the output of our 30 coastal towns of the province and where 33% of our population depends for livelihood (Fishing and marine gathering).

Why should this industry benefit inordinately a very few people at the expense of so many? Let us not accept this malady.

Given the right governance, honest hands, and scientific handling, Bohol can still beat the  agri odds.