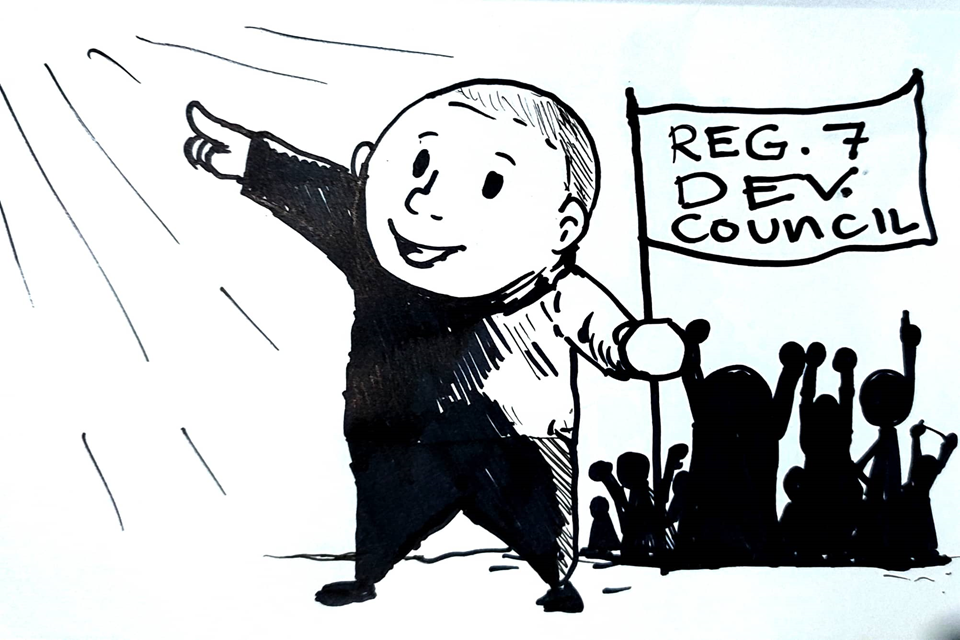 In contention for the slot earlier was Negros Oriental’s  “interim governor” Pryde Henry Teves before he was unseated by a Comelec ruling recognizing the win of  Roel Degamo after crediting the “stray votes” of the namesake Ruel Degamo (declared a nuisance candidate) to Roel.

Perhaps sensing this development, Teves withdrew from the RDC candidacy paving the way to a clear Aumentado chairmanship.

This followed Aris’s unexpected resounding victory as new Bohol Governor last May by dumping reelectionist Art Yap, a moneyed, well-entrenched individual out of the Capitol in a smashing victory which had political pundits scratching their heads in awe. Aris was, in fact, a reluctant candidate -citing “lack of money”: to battle an opponent that had money flowing out of his ears. Destiny, however, had other things in mind.

Flashback to December 2012, Aris’ father  (Rico Aumentado) unexpectedly met his sudden death in Manila and with election rules mandating that the replacement should have a surname namesake, Aris broke into the congressional ranks beating a seasoned rival in the 2nd district in the May 2013 polls. His colorful political odyssey continued with Aris vanquishing all rival takers for two reelection terms in the 2nd district, thereafter.

It is no small matter as RDC is the highest policy-making body in the region and “serves as the counterpart” to the NEDA board at the sub-national level. As such, the RDC sets the direction of ALL economic and social development efforts in the region.

Aumentado will sit as RDC-7 chair coterminous with his term of three years s a congressman. The RDC has LGUs, all 22 regional government agencies, and private sector representatives as members. It is a powerful institution if one considers these.

RDC will (a) approve the Regional Development Plan (b)  present a Multi-Year (3 years) Regional Development Program and (c) review and endorse the national government budget proposals of the regional government agencies like the DOH, DPWH and Department of Education, etc. All of these three have to dovetail with the bigger Millennium Development Goal budgeted to attain Philippine inclusive growth and poverty reduction in the medium-term horizon.

A big task confronts the nation as the latest government statistics this week showed that about 60 million of the 109 million Filipinos claim they are now literally “poor”.

Playing his cards well and applying the “bottoms up budgeting” adopted by the General Appropriations Act, Aris will become a strong force to inject his Bohol development agenda into the bigger picture. His “power and water” priorities and the  Bohol “recovery program” from Covid 19 and Odette need all the shots in the arm they can have to allow Bohol to do a significant economic rebound from a recent disastrous past.

Bringing livelihood, resuscitating the moribund tourism industry, and bringing down the prices of rice and fish must find their way into the RDC equation to jell together the province’s attack on its pressing concerns.

Vice-chair Cobonpue, a businessman of the new generation with training in New York, Italy, and Germany can be a source of good advice for Bohol tourism and  Boholano medium and small entrepreneurs. After all, Kenneth transformed his mother’s then-fledgling furniture factory in Cebu (bamboo, rattan, and abaca)  (the 1980s) called the “Intercraft of the Island” into a world-class exporter of Philippine products.

Cobonpue’s entrepreneurial bent and creative designs caused him to be written about in Times, Newsweek, and Wallpaper magazines after having his masterpieces find their way into the homes of celebrities like Brad Pitt and Angelina Jolie and royalties of various nations in Europe and the Middle East.

We wish the new governor Aris the best of luck and hope that he does not waste the tremendous political capital of a strong electoral mandate and the new designation as RDC Chair of Region 7. These do not happen to everyone every day.

JUST AS THE KILLER OF renowned broadcaster Percy Lapid (real name: Percival Mabasa) confessed to authorities with a bad case of guilt-stricken conscience and fear for his life, the plot thickens. His name is Joel Escorial a confessed gun-for-hire driven to crime by poverty where the team was paid P550,000 to kill Lapid. He received P140,000 credited to his bank account.

Escorial said he was contracted by a Bilibid inmate “Jun Villamor” to do the job. The news wires were more shocked when Tuesday afternoon Villamor was reported to have died in a Bilibid hospital for “natural causes”. Inmates said he was rushed to the hospital as he complained of difficulty in breathing.

It is clear to even plain teleserye viewers that Villamor’s death was meant to silence him and end the quest for the search of the identity of the “real mastermind” who triggered the crime from the beginning.

Curioser is that the victim has allegedly three names: Crisanto Palana Villamor, Jun Alaba Villamor, and Jun Garcia Villamor appearing in his record sheet, entry point, and hospital records.  Why so? Was he likewise murdered? Ordered by whom?

An autopsy was ordered on Villamor witnessed by an independent doctor named Dr. Racquel Fortun who did not give the autopsy process a “good rating process”.

Just as the nation was in the throes of despair that the Bilibid inmate was dead, the DOJ and the DILG suddenly announced there is still one “similar witness”-also from the Bilibid who “knew” about the crime by the name of Christopher Bacoto who is now in the protective custody of the BJMP (Bureau of Jail and Management and Penology). Sic. How come Escorial never mentioned the named Bacoto before in his original TV testimony?

What is becoming obvious to people is it seems there is a massive effort to cover up the Lapid murder with only the mastermind(s) knowing the gravity of Lapid’s exposes had done on their persons or operation.

Apparently hiring Bilibid prisoners to do the “hit” for gain ( money given to their dependents etc) and some personal privileges – usually due to political and business reasons are commonplace. So common that a “similar” movie ( distributed internationally) “On the Job” was already made in 2013 with Gerald Anderson and Joel Torre playing the killers inside Bilibid hired for liquidating people for a fee.

To common folks, this may just seem like another thrilling “Whodunnit It” movie but for the Philippine press, Lapid is another statistic to prove that the Philippines is one of the most dangerous countries for media men to practice their profession. Whodunit? This is still the big question.