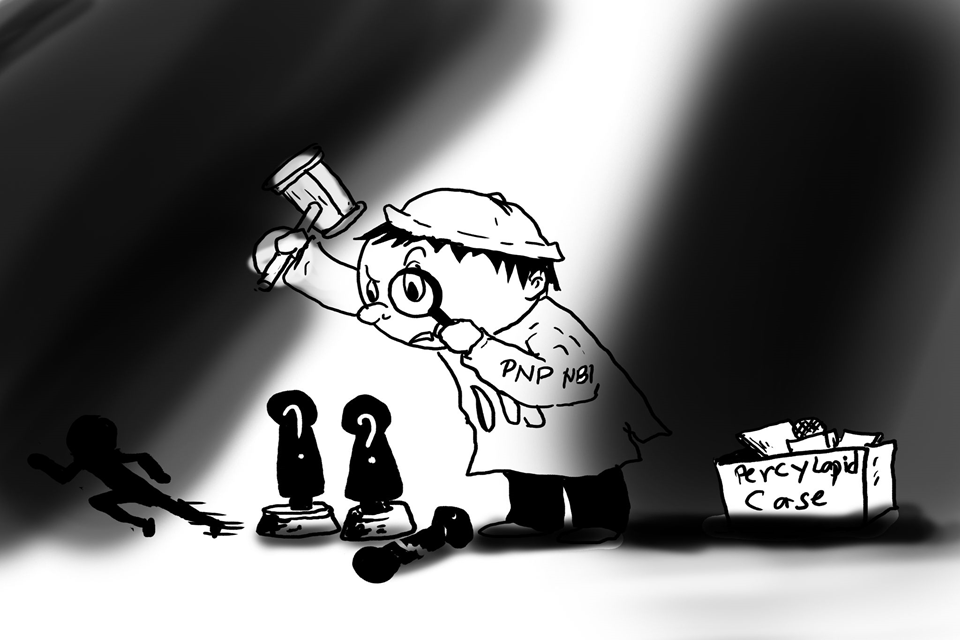 THE PHILIPPINES IS AMONG THE LOWEST  In the “Rule of Law Index” of the World Justice Project in the Asian region.

With international and national attention sharply focused on the murder of hard-hitting broadcaster and Facebook favorite Percival Mabasa or “Percy Lapid”- this government cannot afford to do a wishy-washy job in resolving the “murder-oh-so-foul” and damage further our reputation.

Justice Secretary Boying Remulla is beaming with confidence that the mastermind(s) and accomplices will be fingered and charges filed by the end of this week. Let’s see.

What is abundantly clear now is that there is a widespread conspiracy to obfuscate the case and protect the “murder plotters” and bury Percy as an unfortunate statistic of murdered media men here. That might hopefully not be allowed to happen this time.

Dra. Raquel Fortun, one of only two accredited forensic pathology experts in the country (she is the head of the Pathology Department at the University of the Philippines) said the middleman in the Bilibid Cristito “Jun” Villamor was killed (homicide) by depriving him of oxygen leading to pulmonary congestion and asphyxia by placing his head under a plastic bag. This was in Fortun’s six-page addendum as a “second autopsy”.

The NBI and the PNP who authorized a hurriedly done autopsy said earlier that Villamor died of “natural” causes (“natural” we can agree if that only meant he stopped breathing, sic.).

Traces of shabu was also found in his urine specimen confirming what is already a known fact: that the Bilibid is teeming with addicts and drug lords. According to Fortun, most of the autopsies done here are “below par”, sometimes haphazardly done one pagers- signifying nothing.

There are new data coming out that makes the case a prime candidate for a forthcoming film perhaps titled “On The Job 3”.

For instance, it was on September 5, when Lapid started his last of three exposes of a “DOJ official” (Bucor is under the DOJ) having an apparently ill-gotten wealth of a multi-million 2-story mansion in a plush subdivision and 11 pricey cars including a P7-M Toyota Land Rover. That same day, Joel Escorial, the confessed triggerman, said Villamor contracted him for a hit job to kill Lapid for a P500,000 contract price.

On October 18, when Escorial confessed publicly and pointed to the Bilibid middleman, Villamor was dead within four hours after the disclosure. His cell phone was conveniently “missing”. Meanwhile, the DOJ said they have 8 other witnesses who can lend credence to the case as to the mastermind(s) and motive and are held in secured detention areas for their protection.

These exclude the sister of Villamor who has preserved text copies carrying Jun’s “dying man’s revelation” about who ordered the bloody execution that seemed to hint at three leaders of gangs inside the Bilibid including the Sputnik, Batang City Jail, and one other. Are these her “true” disclosures or a mere diversion to protect the “real” middlemen?

Perhaps some lessons were already learned recently that an “investigation by publicity” which was done by the DILG by presenting Escorial on TV and (prematurely) disclosing his connection to Villamor eventually- apparently- leading to the latter’s immediate homicide. And partially ruined the case being built. We will know for certain by the end of the week.

To start with it is an overcrowded institution, for heaven’s sake, with “close to 30,000 inmates hemmed in like sardines in unhealthy jails. The wealthy inmates, of course, pay their way to privileges like “special dorms”, extended visits, and of course P1-Million to be able to use their cell phones. We all have heard of a former congressman and a governor in the past who were allegedly seen in public places (while serving their terms inside the Bilibid).

In recent years, there has been a reportedly unusual number of deaths in the Bilibid, many of them high-profile, with Covid being used as the cause of death. Operating under the so-called “privacy act of the Philippine Privacy Commission (who denied such are covered in their mandate)- their bodies were covered in fully glued bags making them invisible to all people.

Rumors have it that some of them (did not die) but paid for their actual liberty from jail (assuming new faces( surgery), passports and IDs) and living it up here and abroad. One A. Buratong allegedly got off Bilibid and was in Malaysia. He was reportedly pointed to authorities and re-arrested after a jealous wife found out that he was living there with an alleged mistress.

Another highly suspicious ” death” was that of one – JB Sebastian a high-profile drug personality who testified against then-senator Leila De Lima leading to her incarceration.

One of the primary characters in the Lapid episode is Director General/ Bucor head and DOJ undersecretary Gerald Bantag who was on preventive suspension to allow the case to flow its course. He was appointed to the Bucor by then-President Rodrigo Duterte in 2019 to “clean up the Bilibid”. His reputation precedes him.

On his first day, he faced 28,000 inmates “lugging two Samurai swords and an Uzi machine gun pistol” and vowed he would behead any personnel who connives with inmates and the inmates who try to escape, according to columnist Ramon Tulfo.

While acting as chief of the Paranaque PNP, a tale is told of a grenade exploding inside the jail premises killing 10 hard-core drug offender-inmates while Bantag was able to “shield” himself successfully from the blast by hiding behind a strong edifice. True or not?

Lately, Bantag has taken the offensive- rueing the fact that he is singled out among the so-called 160 “persons of interest” in the Lapid case. He blasted the PNP for having some officers desiring to replace him at the Bucor by discrediting him. (Many of the 160 men, to our minds, could be among the persons who had been hammered by Lapid’s Monday-Friday acerbic radio commentary),

He also said his “mansion” is just a “plan” and he lives in a modest house. And that the luxury cars were all “issued” to him by the government. Those can challenge one’s imagination since, in this country, many crooks had always successfully hidden their ill-gotten wealth by placing them under the names of relatives or friends to avoid prosecution.

But the investigators only have to interview the plush subdivision owners-neighbors and guards and the Bilibid guards to know whether these claims can be the TRUTH. And then sew the pieces together.

In the meantime, the Mabasa family (including brother Roy) and their lawyer-spokesman face death threats all the time, and the 8 DOJ “witnesses” must remain secure -not just while waiting for the charges to be filed but while the whole case is being heard and decided by the courts.

As senator Alan Peter Cayetano said yesterday, the death sentence is not a crime deterrent here. What can be a deterrent is the “certainty” that criminals are being arrested swiftly and that justice moves faster than the sea turtle. Can it be said of Lapid’s case?

This is indeed an internationally-flavored high-profile murder case of a media man. If the case lags on like a tape without a battery, then this will further ruin our rankings in the “Rule of Law Index.” Do you think investors (who will create the jobs) will still come in?

Be vigilant and watch the case closely.

AFTER DISASTERS- WHAT NEXT?

Bohol, frequently visited by typhoons, was chosen as RP’s pilot area for “Post-Disaster Accountability Journalism in the Philippines.

It is a welcome note that local media practitioners were made aware of the importance not just of reporting disasters but more so in watching and monitoring the “post-disaster” developments, especially the implementation of assistance and programs for the disaster victims.

This is something, admittedly, not given serious consideration by the media.

Now, we realize the great need for such a “watchdog”. Not only to ensure the proper use of disaster funds but  more so, to help those badly in need of assistance get what’s due them

One issue at stake was the much-publicized promise of the national government for every family in Bohol victims of typhoon Odette to get P5,000 each family,  When Social Welfare  Secretary Tulfo was announced to be visiting Bohol, all were excited to await his announcement on when fund aid be given. But, only to be told that “sorry, there are no more funds available.”

And there are other concerns about post-disaster assistance that need updating to the public.

We thank Vera Files, International Media Support (IMS) and the Center for Community Journalism and Development.

This undertaking was an offshoot of an earlier meeting between the organizers and the Bohol Chronicle a few months ago discussing how Bohol was “after the disaster.”