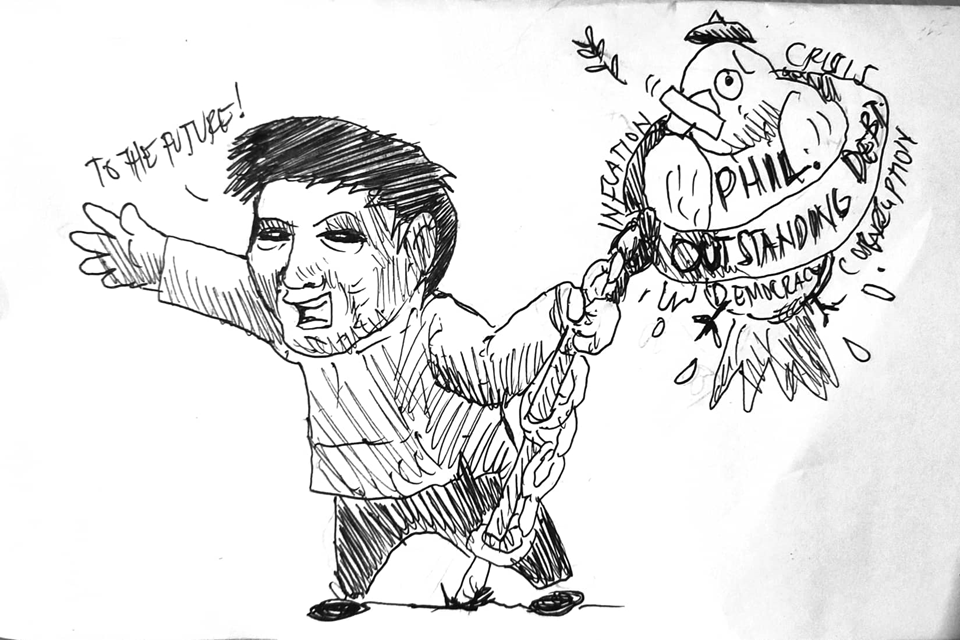 BY MANY MEASURES, the Philippines is considered one of- if not the oldest Democracies in Asia. Whether in name (only) or de facto (in reality) remains a debatable question.

There are two current cases that again belabor that issue again involving the president of the Philippines Marcos Jr. and the case involving the late impeached Supreme Court  Chief Justice Renato Corona.

In Marcos’ case, it was an election issue this year, that the candidate Bongbong was co-administrator of the vast Marcos Estate which had a BIR tax deficiency of P230-B (originally at P23-B in 1999) and had ballooned due to penalties and surcharges.

It was a critical matter because RP had just hit the P13-Trillion debt mark after spending a ton due to the pandemic crisis; a P230-B tax payment would be a huge balm to an aching financial sovereign wound.

In this paper and in the national newspapers as well we cited three options the Marcos family could possibly take (a) rediscuss the case and negotiate for a condonation of some of the penalties to lower the P230-B (b) appoint a “friendly” BIR commissioner who will dribble the case until Marcos finishes his six-year term and (c) to bring back the enormous Marcos fabled “wealth” if indeed true and settle the tax obligations.

It seems the Marcos family is taking Option (b) by hinting at the reopening of the P230-B tax case but using the rather wrong reason for doing so. Marcos Jr. claims that the family wants to discuss the details of the case since they had no chance “to defend themselves as they were all in Hawaii.”

The historical fact is that after Marcos Sr.’s Death in 1989, the family came back to the country in 1991. As early as 1993, court facts attest, the SC already issued a notice on the estate tax while Marcos Jr. was already a congressman of Ilocos Norte. Marcos even served as a petitioner in the Court of Appeals for the tax case. In 1997 the SC affirmed the CA ruling issuing levies against 24 properties to satisfy the deficiency.

By 1999, the SC ruled with finality the Estate Tax of P23-B, or (6)years after Marcos returned to the country and today more than two decades from 1999 (for the Marcoses to contest the verdict). Certainly, the facts confirm that the Marcos family confronted and were given the chance to contest the ruling in the proper courts.

SC Chief Justice Alexander Gesmundo added oil to the fire by recently stating (in reference to the 1999 Marcos case) that ” no decision of the Court is written in stone” and “that it depends on the composition of the court body”. This is where citizens squirm on their seats in that with the universal “concept of right and wrong” -how it is still possible that  20 or 30 years old case with final court judgment can still be bent backward depending “on who interprets the law”.

This is against the “Doctrine of Immutability of Judgments” as written in the “Rule of Law” Sentinel Pages (sometimes referred to as collateral estoppel) that: “issues directly resolved in a former suit cannot be raised again in future years. The Doctrine prohibits any modification or alteration of the final judgment; only purely ministerial execution of judgment. Much previous jurisprudence can be cited here.

Netizens further argue then that if a theoretical president is vindictive or biased can he then appoint a coterie of judges in the SC to suit his flavor so for them to rewrite or otherwise alter previous decisions to favor allies and pin down enemies? Is this democratic? Who then is the Final Arbiter of right or wrong?

In the second case, the graft body the Sandiganbayan in a ruling penned by Associate Justice Arthur Malabaguuio – reversed the forfeiture of  P134-M worth of properties of the late Justice Corona (who died in 2016) due to his heirs since the “SALN”  Law “cannot be weaponized” against perceived enemies. It may be recalled that the Lower House initiated and the Senate (by a vote of 20-3) impeached Corona in May 2012 or more than 10 years ago.

The impeachment was based on three counts (a) false SALN figures files (B) bias towards cases filed against GMA and (c) flip-flopping on a major case. The Sandiganbayan said the Coronas were “not paupers” entering the SC as Renato had an extensive law private practice and the family had businesses (resulting in comingling of funds?). The Coronas also claimed the dollars in their possession are not part of the AMLA coverage.

The framers of the Constitution had structured a method where there has to be a permanent extension of checks and balances between the three branches of government.  The ruling of the Sandiganbayan, thus, effectively erases that -somewhat- in that it reverses a Congressional decision to impeach a sitting chief justice. And the Judiciary (Sandiganbayan) is here taking care of its own (SC Justice of the SC). Where do we go from here? Who is and where is the Law, people ask with raised eyebrows.

People still have fresh in their minds a recent impeachment case where a quo warranto route was taken to unseat (during the Duterte era) Chief Justice Ma. Lourdes Lourdes ( a Noynoy Aquino appointee) for issues largely centered on her inability to file the “correct” SALN for 17 years while serving as a Law Professor at the University of the Philippines. Would this new opinion and action of the Sandiganbayan also change the perception of the SALN portion of the cases filed against Sereno? In that what is good for the goose must also be good for the gander.

These two cases above and the raging two other issues touching on the P1.3 M smuggling of prohibited marijuana by the son of the DOJ Secretary and the murder of a top-rated media man and the attempts of some people (with and in power) to cover the tracks of the masterminds -happening all at the same time provide -perhaps- a ringside view- of the battles raging within the justice system of Asia’s (sic) oldest democracy.

And the world may view- perhaps, herewith- a gradual death of democracy if the excesses are unchecked.

OBSERVING CARLOS P. GARCIA’S 126th natal day, soon- his hometown of Talibon needs to come up with a more concrete program to pay apt tribute to their own (CPG)- who once walked barefoot to his public elementary school in sitio Luy-a, barangay San Vicente to become one of the nation’s most revered Presidents.

After typhoon Odette last year, what was left of CPG’s residence made of nipa hut was nothing but shambles as all were virtually destroyed. Across the exact site of his house now stands a modest statue in a mini-park. He deserves far more than those.

It would be apropos that the clan of the late Pres. Garcia has to come up with some plans to revive the place into a tourist destination being the home of the 4th president of the Republic. And restore the ancestral house of the late President, for starters.

(We know that Meliton Auza, father of Archsbishop Bernardito “Barney” Auza is in the lieneage of the Garcias. In fact, he was one of the trusted men of the late President while in Malacanang.)

Then-Vice President Carlos P. Garcia succeeded the presidency in 1957 after the beloved “Man of the Masses”, Pres. Ramon Magsaysay died tragically in a plane crash in Mount Manunggal in Cebu.

Caloy Garcia was a brilliant student and topnotcher in the bar exams. Destined for public service, he proved to be an exemplary congressman and governor of Bohol and was elected senator of the republic just before the Second World War.

In wartime, the patriot Garcia was active in the guerilla movement against the Japanese-with a price on his head. He served as an adviser in the “free government” organized in Bohol.
He was chosen as Senate majority floor leader (post-war) and consistently voted as one of the most outstanding senators.

Retired from politics in 1961 after losing to Diosdado Macapagal-he was egged on to run as
Constitutional Convention delegate representing the third district of Bohol. Advising him was the late Rico Auumentado, father of present governor Aris; earlier it was Garcia who asked the elder Aumentado to try his hand in politics noticing the brilliance of the man.

Literally, Garcia died with his boots on, dying two weeks during the Conon presidency.

Garcia loved his country so much. That’s why he came up with his Filipino First policy, putting the welfare of Filipinos ahead of foreigners in trade and industry. Wanting food security, he led the establishment of the International Rice Research Institute in Los Baños, Laguna.

He wished for the nation to survive the economic difficulties and initiated what has been called the “Austerity Program” which put our limited resources to smart use. He desired to revive Filipino cultural arts and instituted the “Republic Cultural Award”. To this day, the award is being given to outstanding Filipino artists, scientists, historians, and writers. He was also a scholar, teacher, poet, orator, lawyer, sportsman, and political economist- indeed, many things to many people.

Yet the final feather on his glorious cap as he bowed out of public service was his being
unstained with any taint of corruption. He lived and died a poor man- not one peso richer than when he entered Malacanang. And he anchored this on his love for humanity and deep faith in God.

The lasting legacies of the man – the greatest Boholano ever- make him deserving of greater recognition and honor.