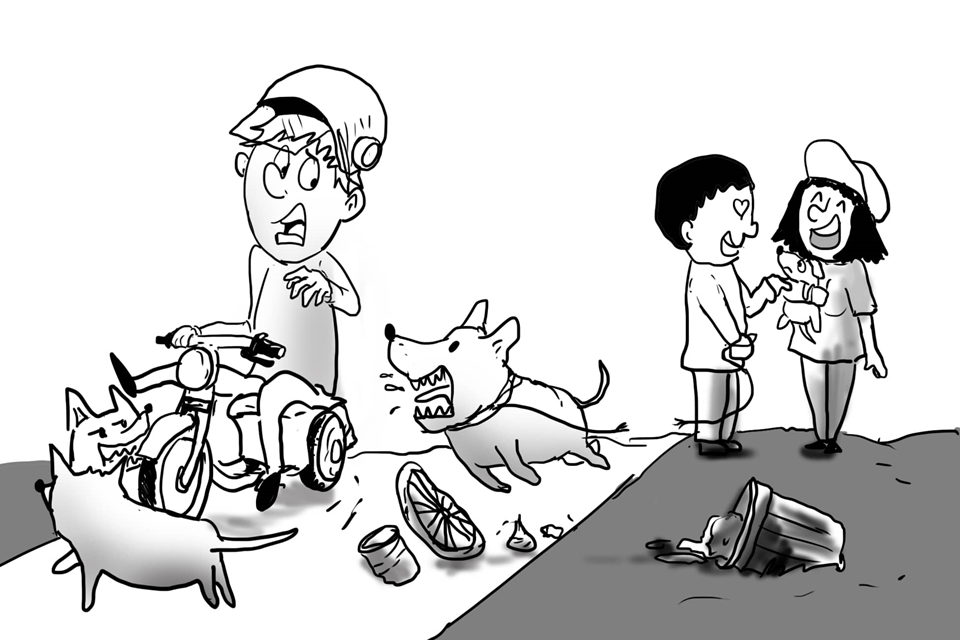 IT USED TO BE THAT IT ONLY BECAME NEWS when a man bites a dog; not when a dog bites a man. Not these days, anymore.

Dogs have lately become news (because) (a) there exists a lot of stray dogs (“Askal” in Tagalog as in asong kalye) causing many road accidents particularly involving motorcycles and (b) the Philippines remains one with the most dog-biting (with rabies) incidents in Southeast Asia. The citizens are pissed off.

Since dogs cannot read traffic signs and do not readily sense danger, they stray in wanton abandon into barangay roads or highways- lighted or not- daytime or night- and have caused many accidents.

The second problem gets aggravated due to the scarcity of anti-rabies vaccines in government hospitals (used to cost P400)  and is expensive at private hospitals and pharmacies (when available).

Global statistics indicate that at least a million people (still)in the world are bitten by rabies-infected dogs every year. In the Philippines 300 to 600 people die of rabies infection from dog bites yearly. According to the World Organization for Animal Health, about 82% of dog-biting cases are caused by “free-roaming” stray dogs.

The presence of stray dogs became more alarming when 40 of them were spotted in that short stretch between barangay Libaong, Panglao to Bingag in Dauis. Not only are they eyesores but pose a big danger to tourists and locals alike.

The call for “Responsible Dog Care” is being hammered resolutely provincewide due to the alarming number of incidences of road accidents caused by stray dogs and the occasional dog-biting incidents we hear.

The issue went “viral” on social media when a certain John Coquilla stood up in the halls of the Sangguniang Bayan in Antequera denouncing the malady. All barangay captains were then mandated to take responsibility for educating the people about proper dog care.

A law, Republic Act No. 9482 known as the “Anti-Rabies” Act of 2007 says things clearly enough. Private dog owners are tasked to have their pets vaccinated with anti-rabies shots (at least every three years) and keep people safe from them. Article 2183 of the Philippine Civil Code explicitly cites that the “possessor of the animal is responsible for the damage it will cause.” So, one can sue the owner of the dog that bit him for damages.

As an offshoot, the SB Corella, sensing the hopelessness of people in dealing with stray dogs, was hard-pressed to ask for an appropriation from the town coffers. On the other hand, a dyRD survey following the Antequera measure generated a big howl from Boholanos demanding that the LGUs protect human lives and exert effort for proper care of these canines in their localities.

People can always take refuge in the letter of RA 9482 of 2007 which mandated certain responsibilities of line agencies as a matter of law. The Department of Agriculture (under whose mantel is the Food and Drug Administration) is required by law to make available anti-rabies vaccines (AT ALL TIMES) and the Department of Health to be ready (daily) to administer them in their health centers for all rabies emergencies.

Section 10 mandates the LGUs to pursue a “Dog Control Population” that only a minimum of stray dogs be allowed to roam freely in the community. In fact, one of the provisions here is that the LGUs, particularly cities and first-class municipalities are supposed to maintain a “dog compound” for stray dogs. Others are enjoined to have their shared compound with other municipalities. The law mentioned that these activities should be taken out of the Internal Revenue Allocation money and local funds as well. It is also the LGUs duty to make sure that all dogs in their area of responsibility be immunized with anti-rabies vaccines.

We recall in the years before Covid-19, there was an active vaccination drive for dogs (anti-rabies) here -we wonder what happened to that program. The law even mandates a budget allocation for that purpose specifically. What happened then? Who are and not complying?

Rabies, on the other hand, is a zoonotic virus that can be transferred from animals to humans usually via the former’s saliva entering into the skin or the mucous membranes of the eyes, nose, and mouth of humans. Once in the system, it attacks the brain and spinal cord. Flu-like symptoms and general agitation is observed in victims and unnoticed for a long period can most likely lead to fatal death.

Therefore, the alarming number of road accidents (due to stray dogs) and the lack of anti-rabies vaccines here have both become visible community risks that need to be addressed by all, most especially by the LGUs. Are you there?

IS THE PHILIPPINE ECONOMY GETTING BETTER?

LET US ALL BE CAREFUL when the Government feeds us with economic statistics and we swallow its propaganda hook line and sinker.

For instance, when the Government says that the GDP ( Gross Domestic Product) grew by 7%, we have to measure that with the current rate of inflation which hit 7.7% in the third quarter. Inflation, as we know, is the rate that prices of goods and services had gone up.

If the numbers remain for the rest of the year, our countrymen will be worse off because the inflation rate is higher than the GDP growth rate. One of the reasons is that our country remains an inverted pyramid economically where roughly one can say 10% of the population (billionaires of this country) own 90% of the nation’s wealth. And vice versa.

Thus a 7.0% GDP “growth” rate is not shared equitably by all. That is the reason why during the pandemic, the wealth of the top billionaires in the country scaled to the greatest heights while today 50% of the Filipinos surveyed say they are poor. Pre-pandemic, only 21%  of Filipinos were below the poverty line then.

There are also unemployment and underemployment rates of 6% and 14%, respectively this year which means 21% of the Philippine population is earning none or too little. Or 1 out of 5 Filipinos is in misery.

To check inflation, the RP government seems to copy the monetary policy of the USA to contain it by increasing interest rates. But sadly, to our minds, the results will not be the same. The American policy will one day result in people starting not to buy or expand and, thus, lessening the heat of demand, and thus, the prices there would tend to stabilize ( or curb inflation).

Increasing rates in the Philippines, however, only serve to increase the cost of goods since many companies here are capital starved and therefore highly in debt and the rich with much money will not expand their businesses and instead park their idle money in deposits and treasury bills whose interest yields are going up. The rich will not expand the business which would have created new employment.

Thus, rather than help, increasing interest rates may even worsen inflation and punish the poor some more. Ever wondered why Economics is called a “dismal science”?