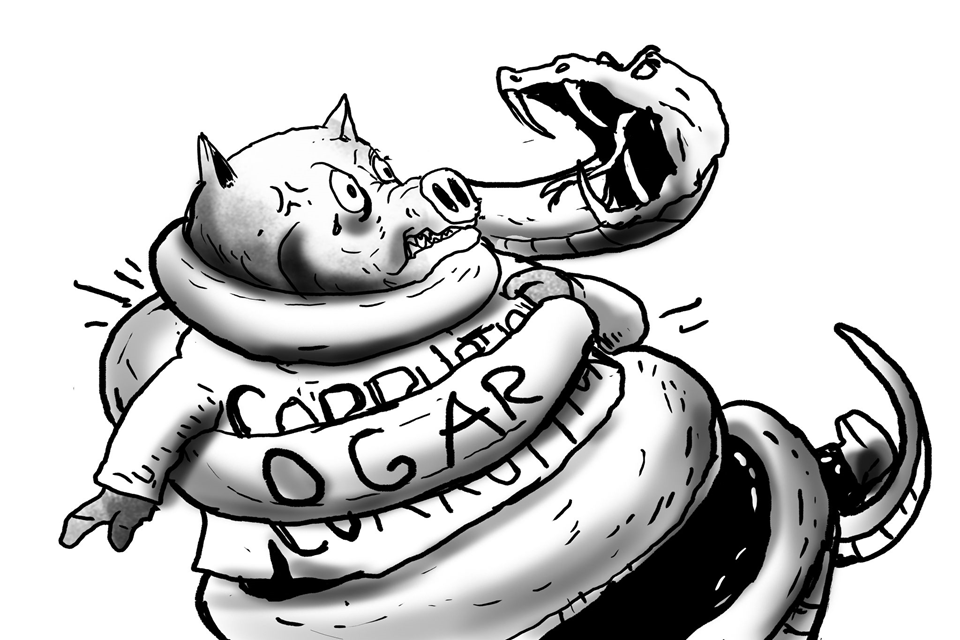 WAS THE ART YAP ADMINISTRATION truly corrupt to the bones or was just perceived to be so? Was the tremendous winning margin of 130,000 of a challenger over a deeply-rooted incumbent governor just a stroke of luck or a reflection of how fed up the Boholano electorate has been with the importuning of the Yap administration?

Was the unprecedented margin of Governor Aris Aumentado a true confluence of several actors cemented by a common cause or a loud rejection of the “business as usual” political thievery of public funds?

So peeved were the Boholanos with official theft that they said: “no mas” (no more)   indicating that they no longer salivate over the color of the bribe money and the oil-tongued promises of a better three years from the incumbents.

Of course, any opponent of the wealthy Binondo-based candidate would suffer instant chilling fever just contemplating the enormity of his war chest. But in the thick of an acrimonious electoral campaign that bloodied both sides with poisonous tirades in May, the Boholanos believed the narrative of Auumentado more.

Many expressed anger that they were called “mukhang pera” and vowed to throw out of the window any bribe money given to them to vote one way. So much so that in the last ten days, the financial adviser from Binondo cautioned the losing candidate not to throw in more good money after bad. He was losing the race.

Even days into the actual poll date, Yap was already murmuring he was “prepared to lose”. And lost he did in a crashing defeat never seen by an incumbent governor in Bohol’s political history. Yap was relegated to the political doghouse and he bade- adieu to Bohol politics forever.

But the people were not satisfied with just saying “good riddance” but wanted to score their pound of flesh in the words of Shylock. They wanted those people who participated in the wholesale robbery of scarce government money paid mostly from people’s taxes- to be fingered.

Convicted and led to the guillotine. No, not due to a sense of vendetta but to set an example to all and sundry that henceforth there will be a steep price to pay for graft in this province.No more making a business out of government positions and all deals that are as crooked as Ichabod’s crane’s back.

And people applauded when one of the first acts of the new group was to create (OGAR) Office of the Gov’t Accountability and Review to deal with this new advocacy of cleaning up the government. And no better man would have headed it than former Cabinet Sec Jun Evasco who “mysteriously” lost by a slim 2,000 vote to the same Yap in 2019.

If for anything, Evasco refused to pay one centavo for any undeserved vote and this tells much about the man since Bohol is notoriously known to be one of the most expensive places to run for public office. And he in OGAR now has a battery of lawyers and graft-busters- all refusing to get a salary-exposing they meant business, nothing else.

But good intentions do not win a war. Actions do. Four months to date, people are agitating to see a semblance of results-specific charges zeroed in and achievable timelines because they seem to find none yet.

No, they need not file a multiplicity of charges to nail the suspects. One good solid case, preferably bordering on plunder should settle the score. Al Capone, notorious for vicious crimes like murder went to jail for a tax case to a life sentence, remember that.

Indeed, this is a test case for OGAR. The public is issuing the challenge for OGAR to make true to its mandate to straighten the government. And to do this is to discover the modus operandi used in perpetuating graft, And in the process, make the suspects pay here on earth what they will, anyhow, eventually pay for in the afterlife.

Corruption, ladies and gentlemen, is a scourge of society.  It erodes trust in the government which needs every ounce of trust from the people to function. It weakens democracy in that the people in power make hay while all watch powerless to stop them.

It dampens economic development because public funds are diverted from projects into the deep pockets of men with slimy hands. It exacerbates inequality in that it deprives the poor of public service and enriches unlawfully those who have the clout and means.

It diminishes our sense of justice because the law enables crimes to be carried out with impunity and agents of the law are subject to coercion, threat and even death.

OGAR, the people of Bohol are looking at you to make the move. Now.

INFLATION HERE AND ABROAD will somewhat dampen the Christmas Holidays this year. Buy Santa Claus a new red and white outfit as he will appear at the doorsteps thinner and taut-faced. Poor  St, Nick. Rudolph, the red-nosed Reindeer will look anemic that is  if Santa had not eaten him for dinner yet,  Why are those so?

Reports from the DTI say prices of 51 Noche Buena Items will go up by 10% including ham, fruit cocktail, spaghetti, sauce and cheese. DTI, as we know, cannot control the price for these items, only basic commodities.

RP’s inflation averaged 5.4% from January to November 2022, eroding the GDP growth of about 6.0-..6.5%. It’s a stalemate. Santa’s direct delivery sales have been hampered in that by 2022- more than 50% of the holiday gift purchases will be done online.

A very merry Christmas to all. Oh, but, not really.