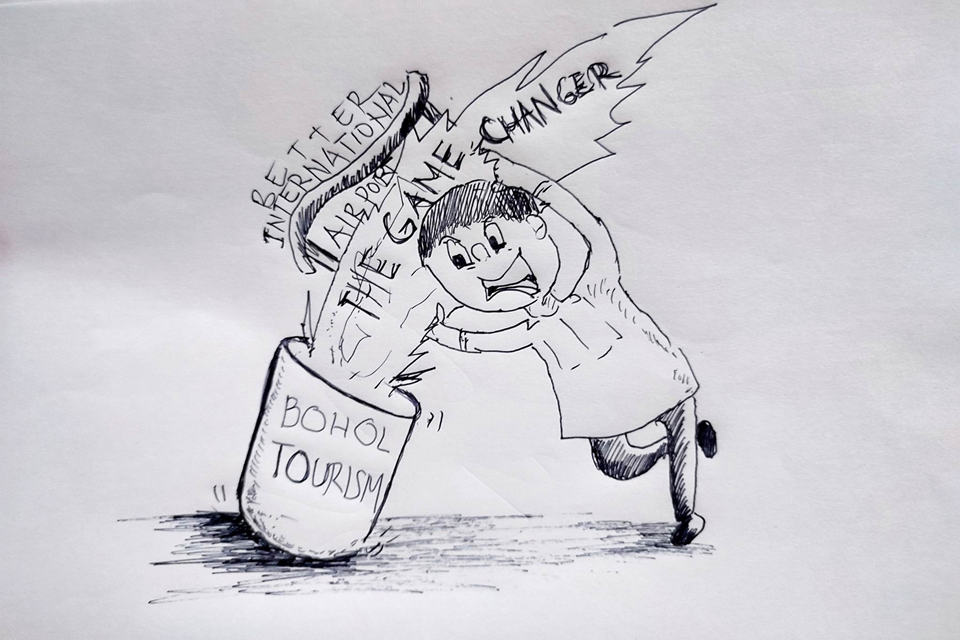 THE FUTURE OF BOHOL TOURISM  beckons clearly over the horizon.

With Bohol’s oozing potentials, tourism stagnating should not be in the vocabulary.  It is a shame to squander our ranking as one of the Top 5 destinations in the nation. What needs to be done ASAP?

First things first. We need our Bohol Panglao International Airport to live to its name as an international airport; not just a good domestic airport in the country. An empty shell except for the carousel.

The culprit is the delayed turnover of CAAP to a private sector entity who can run and operate the airport as it should. Government, reputation -wise do not run businesses well.

We heard of Aboitiz  is almost  at the brink to getting the tiara. The Marcos administration will not commit the same mistake during the previous administration where there was reportedly  something “fishy” on why the turnover did not materialize.

We need an honest-to-goodness company who knows not just how to operate the airport but would be knowledgeable in marketing the airport to the world.l  We could not just fold our arms waiting for the international flights to come. We have to market the airport.

Second, the product must sell by itself, the airport has never been as presentable as it should be. There are no concessionaires inside the terminal.   Not even a restaurant. Imagine the kind of hunger pangs passengers face when flights are delayed substantially-or worse cancelled.

An international airport must live up to its name.Delaying a turn-over is inviting physical deterioration.

The second game-changer is a huge convention center to accommodate big events which Boholanos  have missed over the years. We challenge the Aumentado Administration to go bullish on this much needed  convention center that should be of international standards.

Having professionally- marketed airport and a classy convention center means we need to upgrade our facilities.

But we are not laggards in this respect. For instance,international media groups last week arrived in Bohol for the launching of Panglao Shores.  This is a 50-hectare vibrant new community that “combines irresistible local charm and the highest international standards” on the pristine shores of Panglao.

A key piece of the future is the development of Town Square.   This upscale development will be structured in phases, and joined by luxurious new resorts, quality residences and other facilities and amenities.   South Palm Resort Panglao just one part  of this development .

We welcome the launching of Panglao Shores. Under the stewardship of young hotelier Hope Uy,  we are confident that this trend of development in the province will take off and invite similar ventures. The forecast development is for configured to cover the next 10 years.

However, we expect the first international resort to open by mid next year while other big names in the resort industry will likely follow suit. within the complex. It’s a matter of time that Bohol will have both the upscale development and we leave Alona beach to what the general public would want to have as their version of a favorite hub.

The P25-Billion Panglao Shores over a vast 50 hectare land is a the latest to be added to buttress the tourism future of the province. It is going to be a cut above the rest- in size and variety and multiplicity of choices.

Prior the pandemic, Bellevue as well as Modala resorts launched their own plans for a similar multi-facility complex which makes itself of  a town square concept where everything is within the reach by the tourists – resorts,  condominiums, restaurants, mini malls, and even perhaps hospitals put into one massive integrated tourism development.

We welcome this development programmed for the upgrading our tourism facilities in the province.   With the dynamic private sector having faith in the present Aumentado administration, we hope to see the start of a very promising  future of Bohol tourism.

WHILE PRESIDENT FERDINAND MARCOS JR, was busy introducing himself to the world community by his constant travels recently, unfortunately, it seems his own “palace” was burning . With two issues.

One has to do with a “gut” issue that affects the teeming populace; the other one is one that BBM needs to prop up his presidency when danger lurks.

One has to do with agriculture which he insisted to be an Honorary Chairman without appointing a hands-on day-to-day Manager as Secretary. That cannot be. The problems are enormous and concerns what people eat everyday.

Most of the basic agri items the Philippines we import. For instance, a rice eating 109 million peopled nation like ours is the biggest rice importer in the world. We import 3 million tons of rice yearly.  Most of the sugar we import, according to a UN Data, we imported $451M of sugar in 2021.

Garlic we mostly import. And onions- well, the housewives have been crying for months- not because of the peeling- but the God-awful prices- at P500-P800 per kilo. That is more expensive than pork, rice, chicken and fish and eclipses the daily minimum wage of a Manila worker at P575 per day.

Fish which has been the main protein source of Filipinos – we imported $746M. Thde hoarders and smugglers manipulate supply to raise prices.

All these means that if a world-wide recession happens and all nations stop exporting their agri products, we will all die from starvation since we are import dependent..

His other problem is with the restive military which has been rocked by resignations (disappointed) and the required resignations (voluntary) to cleanse the ranks of colonels and generals who are scalawags involved in the drug trade. The Defense and the AFP ranks have been in needles and pins because of top brass changes. All these while the president was largely abroad.

Our two cents suggestion is for the president to stay awhile on top of his burning palace- no travels for the moment- and solve this massive two headed hydra-monster first in Agriculture and the Military- which if unsolved may threaten the stability of his throne. It is for his own good.