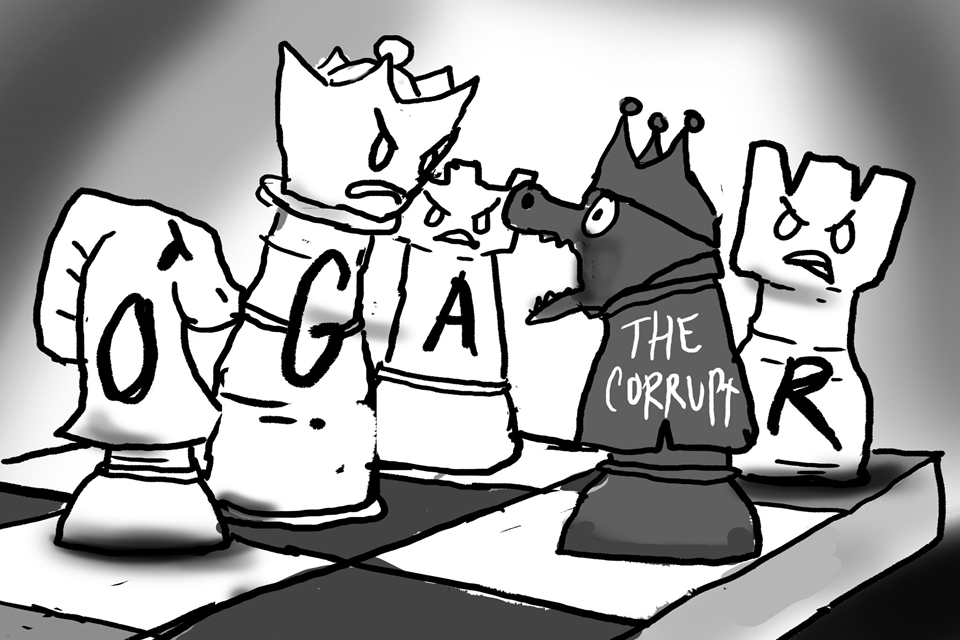 OGAR, FINALLY, MAKES ITS FIRST MOVE.  Will this lead to the downfall of the Queen or a chess draw? And everyone goes home disappointed-scratching his head and nursing a hungry belly (for justice)?

“Slow but sure”- is a fine strategy for things legal as how Chairman Jun Evasco of the Office of Governance, Accountability and Review (OGAR) describes their independent investigation on alleged anomalies during the administration of then Gov. Art Yap. Fine.

Finally, a warm body is fingered. OGAR identified Acting Provincial Agriculturist Larry Pamugas as the first Capitol luminary in the list of those to be investigated for alleged graft and corruption. OGAR said Pamugas was recommended to be charged administratively for grave misconduct, gross neglect of duty and commission of an act punishable by the Anti-Graft and Corrupt Practices Act.

With the initial findings, the office of Gov Aris Aumentado will now be at the receiving end to conduct its own investigation based on the recommendation of OGAR. The public will closely watch the next moves of the governor who is expected to create a body to conduct the investigation.

The legal process will surely be tedious as it needs to give Pamugas his “day in court” to air his side once called by the investigating body to be created by the governor.

They say that more often than not perception leads to the actualization of what is being perceived.  It is noteworthy to recall that the Boholano electorates resoundingly placed Ex-Gov Yap in what deservedly looked like his political doghouse after a huge 132,000 margin loss of votes in the 2022 gubernatorial race against now elected Gov Aumentado.

The margin was anchored on the alleged corruption prevalent in Yap’s era which needs to be proven to have of legal consequences. There was so much noise on this during the campaign period thus the electorates voiced out their sentiments with a negative Yap vote in their disgust with corruption that added insult to their poverty.

What exactly these corrupt practices did to the body politic and shortchanged the government of much-needed funds will be exposed in its clearest form as soon as the investigation will commence shortly.  It could be that among all Capitol luminaries, it is at the office of Pamugas where OGAR discovered several “smoking guns” that could require a deeper, holistic investigation of the alleged corruption- and nail the guilty.

We heard that Pamugas has always been a “loyal servant”: who follows what his master would tell him to do. Blind followers, they are called. Perhaps, it is along this kind of dynamics that OGAR may find a way to get deeper into the psyche and the labyrinth of deceit covering the alleged corrupt practices done during the previous administration.

Whether Pamugas will spill the beans or protect his “masters’’, remains to be seen. Of course, OGAR also recommended some options like those recommended to be filed with charges could turn into state witnesses in a possible scenario where he would rather embrace self-preservation rather than become a “hero” – or a fall guy, it depends- to admit the commission of the crime on corruption.

The public would be keeping a very close watch on who will compose the probe team to be created by the governor. We need a few good men.

They should separate the men from the boys here. Each of the members of this team must adhere like a leech to the anchors of professionalism, fairness and objectivity in looking at every possible angle of the allegations.

We hope that the investigation by the probe team does not tread too slowly such that nothing is eventually proven and the next election will come. We remind the governor that he just has about less than 2.5 years for his Probe Team to come up with its findings which will call for the final filing of administrative charges.

This is one game that the new government cannot afford to lose. It will have no face to present to the public once the next election comes around if no one is convicted- or at least criminally charged.

“WE WILL DO IT DIFFERENTLY”  was what newly-minted president Marcos Junior answered affirmatively when asked if he will pursue the anti-drug war of his predecessor.

The years past have proven that the drug menace will stay if only small-time users and dealers are maimed or killed and the Fat Drug Lords and their conniving police and PDEA men are big-time drug characters themselves.

A decorated police Master sergeant Rudolfo Mayo, for instance, was caught with P6.7 B worth of shabu last October 2022 and a PDEA officer was caught tainted with a massive shabu stain later.

The “enemy is within” the Palace chimed and admitted 10 generals and colonels (scalawags, they are called) are involved massively in the drug trade and are enough to put the anti-drug operation of the government in jeopardy.

All 1 full general, 8 lt. generals, 21 major generals,114  brigadier generals and 81 colonels were asked to hand in their courtesy resignations. In 3 months, a “sensitive” panel will finger the 10 scalawags and accept their resignations.

We daresay, charges should be filed. Their police uniforms should not qualify as shields against their guilt.

One rotten egg, they say, can spoil a basket of eggs. So good riddance should be what the other innocent men and women in the military should feel for the scalawags when they get axed.

After their dismissals, the military should now dismantle the apparatus that entrap these men in uniform to be enthused to become breakers than enforcers of the law.

In one article it was noted that the happy old days of the Duterte regime where the police were rewarded handsomely for talking out drug dealers on the street and pampered by confidential funds in their operation -had apparently taken a new way to maintain their lavish lifestyle under the new BBM administration.

They have become drug lords themselves, Watson.

The other item that leaked into social media last week is the apparent rivalry among the leaders of PMA 88 and Class 89 especially over the musical chairs happening at the top military brass. This bears watching by the president, for sure.

Likewise, it seems the RA 11709 which prolongs the terms of office of top military assignments had also created a crowd of malcontents under- eager for promotion and stuck in their old positions for too long. Boredom and jealousy can be quite upsetting.

Some machinations must be made to disperse the ill effects of this new ruling for term extension. A restive military is a recipe for a banana republic.For comments: email to dejarescobingo@yahoo.com or bohol-rd@mozcom.com